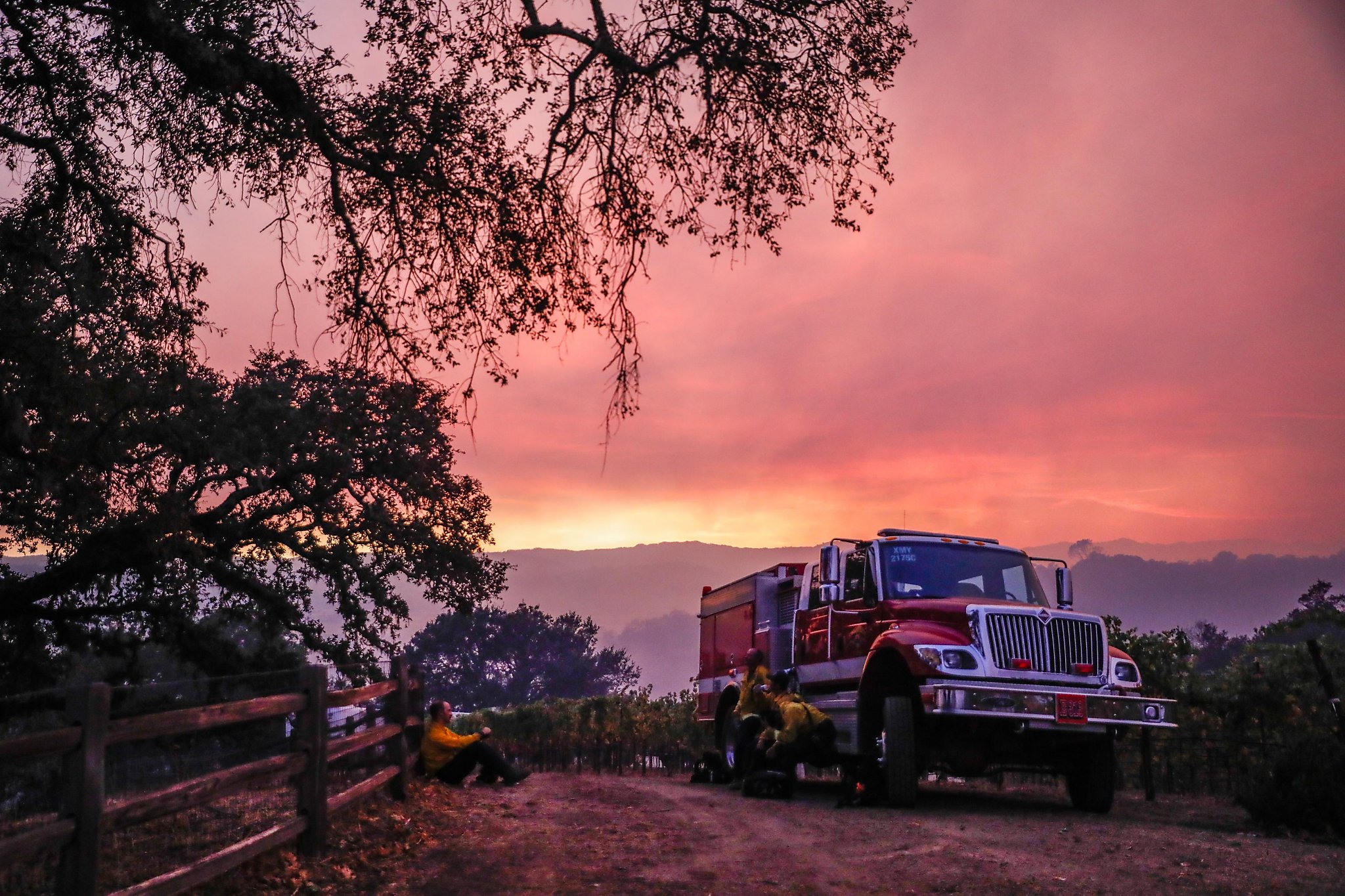 More than 44, 000 residents in Healdsburg, Windsor and communities along the Highway 101 corridor were ordered to flee their homes and businesses Saturday morning as the voracious Kincade Fire continued to roar through Sonoma County.

Another 43, 000 county residents living between Highway 101 and the Pacific Ocean were warned to be ready to run if the fire, pushed by powerful winds, took off overnight.

The mandatory evacuations that emptied the towns were ordered by Cal Fire and came as the blaze swelled over Friday night by nearly 1, 800 acres. More than 2, 000 firefighters Saturday faced another hot, dry, windy and life-threatening day in the rugged hills and canyons of northeast Sonoma County.

Helicopters and airplanes were helping 53 fire crews on the ground in a frantic race to make as much progress as possible before winds of up to 80 miles per hour were expected arrive Saturday night to make the battle even more treacherous.

The explosive fire was so intense that it forced a firefighter on Friday night to deploy his personal fire shelter – a tent-like device carried on a waist pack – to save himself and two fleeing residents.

The three people, who were not identified, were being evaluated for non-life-threatening injuries, Cal Fire said in a statement.

Containment of the fire remained at (%, with) structures – some of them homes – destroyed. Another 23, 500 structures were threatened. There have been no deaths, Cal Fire said. The size of the fire grew to 25, 455 Acres.

The highest velocity winds were expected in the hills and ridges. They will be more intense and last longer than the winds that pushed the devastating 2017 fires in the Wine Country, Peterson said. 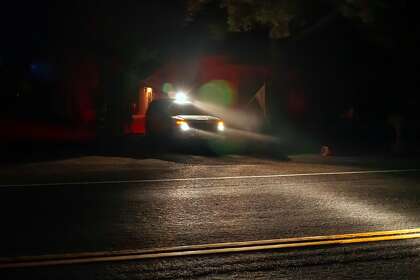 Ten helicopters, two dozen bulldozers and 179 fire engines were on the Kincade Fire line, which snaked through the hills east of Highway 101. Roads to the east of the highway, including Highway 128, remained shut down. Anxious residents stood by at roadblocks, awaiting any news.

Early Saturday, a convoy of two dozen fire trucks and bulldozers headed east from Geyserville into the fire zone to relieve crews that had worked overnight. Their job was to cut vegetation, create fire lines and lay down retardant.

Fire Captain Jack Thomas of the Santa Rosa Fire Department, aboard one of the trucks, said he hoped it would work but warned that the predicted high winds could foil their efforts.

“We’re going to try to get in there and do as much as we can,” he said. But cutting fire lines and creating clear zones “doesn’t matter when you have 80 – mile-an-hour winds. ” 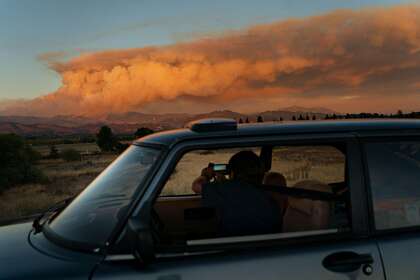 In Healdsburg and Windsor, residents and businesses hurried to pack up and get out of town.

Danielle Kuller, the manager at Amy’s Wicked Slush ice cream store in Healdsburg, said the store was shutting down and employees had been sent home.

At KC’s American Kitchen in Windsor, dozens of breakfast customers watched the sheriff’s press conference on the restaurant TV and found out the town was being evacuated.

“They all paid their checks and left,” said Sheryl Farmer, the restaurant manager. “The restaurant is empty now. Our staff is worried and frantic. They’re all trying to get home to be with their families. It’s a little stressful. ”

Traffic picked up and lines formed at gas stations as residents hit the roads out of town. 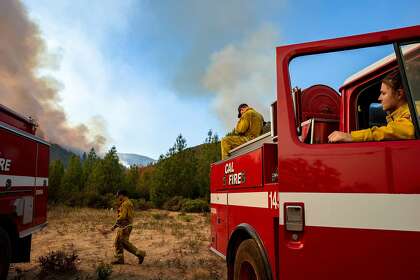 “It was nuts,” said Brian Benn, who waited 15 minutes to fill up at a gas station in north Santa Rosa, just outside the evacuation area, where he said the line behind each pump was six cars deep. “You can tell people are feeling a little panicked, and trying to get their stuff together.”

But by midday Saturday, the evacuation shelter was itself being evacuated.

Down the road, Jorge Vazquez, 31, who works in the maintenance department at the Best Western Dry Creek Inn in Healdsburg, was tasked with going door to door telling guests to leave. Each was given 30 minutes. Many were evacuees from the Geyserville area, undergoing their second evacuation in three days.

“It took some convincing to get them to leave,” Vazquez said. In one case, he said, he had to threaten to call the police.

Early Saturday afternoon, Cal Fire extended the evacuation warning area to include an even larger area to the west, stretching from Highway 101 west to the Pacific Ocean.

The extended warning area, Cal Fire said, included “all areas west of Healdsburg and west through the Russian River Valley to Bodega Bay.” They included the Dry Creek Valley west to Forestville, the Larkfield and Mark West Drainage and the area west of Sebastopol to the coast, north of Bodega Higway and south of Stewards Point / Skaggs Springs Road. 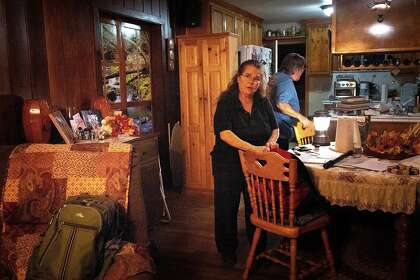 The 43, 000 residents of those areas were instructed to stand by and be ready to flee if ordered.

New evacuation centers were opened at the veterans halls in Santa Rosa and Petaluma, and at the Petaluma Fairgrounds.

The fire-friendly weather conditions were affecting much of Northern California, where as many as 940, 000 customers were expected to lose electricity in planned Pacific Gas & Electric Co. power outages designed to prevent the outbreak of additional fires.

With what forecasters called a “potentially historic” windstorm Saturday night into Sunday, PG&E began shutting off power to as many as 2.8 million people across huge swaths of the state in an attempt to avert catastrophic wildfires.

The utility said that as many as 940, 000 Homes and businesses could lose power in portions of 36 counties across the Bay Area and throughout Northern and Central California.

“The next 72 hours will be challenging, ”Gov. Gavin Newsom said at a Napa event Saturday afternoon. “I could sugarcoat it, but I will not.” 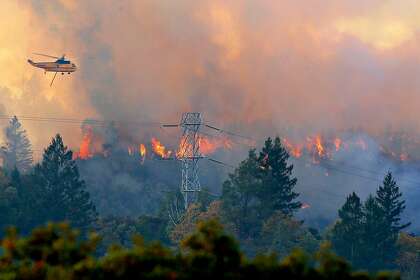 The planned outages were unprecedented. In Marin County, officials said they expected virtually every PG&E customer to lose power. In the last widespread round of planned outages, earlier this month, 738, 000 residences and businesses in Northern and Central California had their electricity cut off.

PG&E warned that the shutoffs would spread later in the day to the Bay Area, including Marin, Napa, Solano and Sonoma counties. The Marin County Sheriff’s Office said it expected the outages to affect99% of the county.

“It almost feels like an apocalypse,” said Armand Quintana, manager at Jackson’s Hardware in San Rafael. “There are lines at the gas station, people are buying ice from grocery stores, they’re out of ice. I’m looking for zombies. ”

The store ran out its stock of 50 generators Friday morning, ranging in price from $ 1, 100 to $ 5, 000. Just hours before the expected power outages Saturday, it ran out of flashlights, batteries, candles and other power-outage supplies. A few straggling customers asking for generators were turned away.

Smoke from the blaze was wafting through the Bay Area and could be sniffed on Saturday in downtown San Francisco.

Air quality experts advisedthat buying masks and filters is no substitute for finding clean-air spaces, such as libraries and shopping malls.

“Masks may not be the answer for a lot of people,” said Dr. Jan Gurley of the San Francisco Department of Public Health. “Sometimes they make you feel a little better. But there are no substitutes for getting to where the air is clean. ”

Air quality throughout the Bay Area was expected to be “unhealthy for sensitive groups” and a Spare the Air Day was declared by the Bay Area Air Quality Management District. It was the 20 th of 2019, compared with 13 days in all of 2018, (days in) and (days in) . Residents were advised to limit outdoor activity and avoid driving and woodburning.

The blaze has been burning in a southwesterly direction on the east side of Highway 128 and eastern Geyserville. Firefighters built containment lines on the edge of Geyserville, where 735 structures were under threat.

Newsom toured the devastation Friday, visiting residents, meeting local officials and praising firefighters for their “extraordinary heroism.” The governor also stepped up his criticism of PG&E as state regulators look into whether the utility company’s equipment played a role in the fire.

The company told state regulators Thursday that equipment on a transmission tower broke near the origin point shortly before the Kincade Fire was reported at about 9: 25 PM Wednesday. That’s despite the fact that power had been shut off in the area – but not on that transmission line – in an effort to prevent such an event. 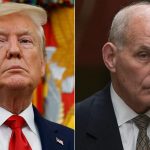