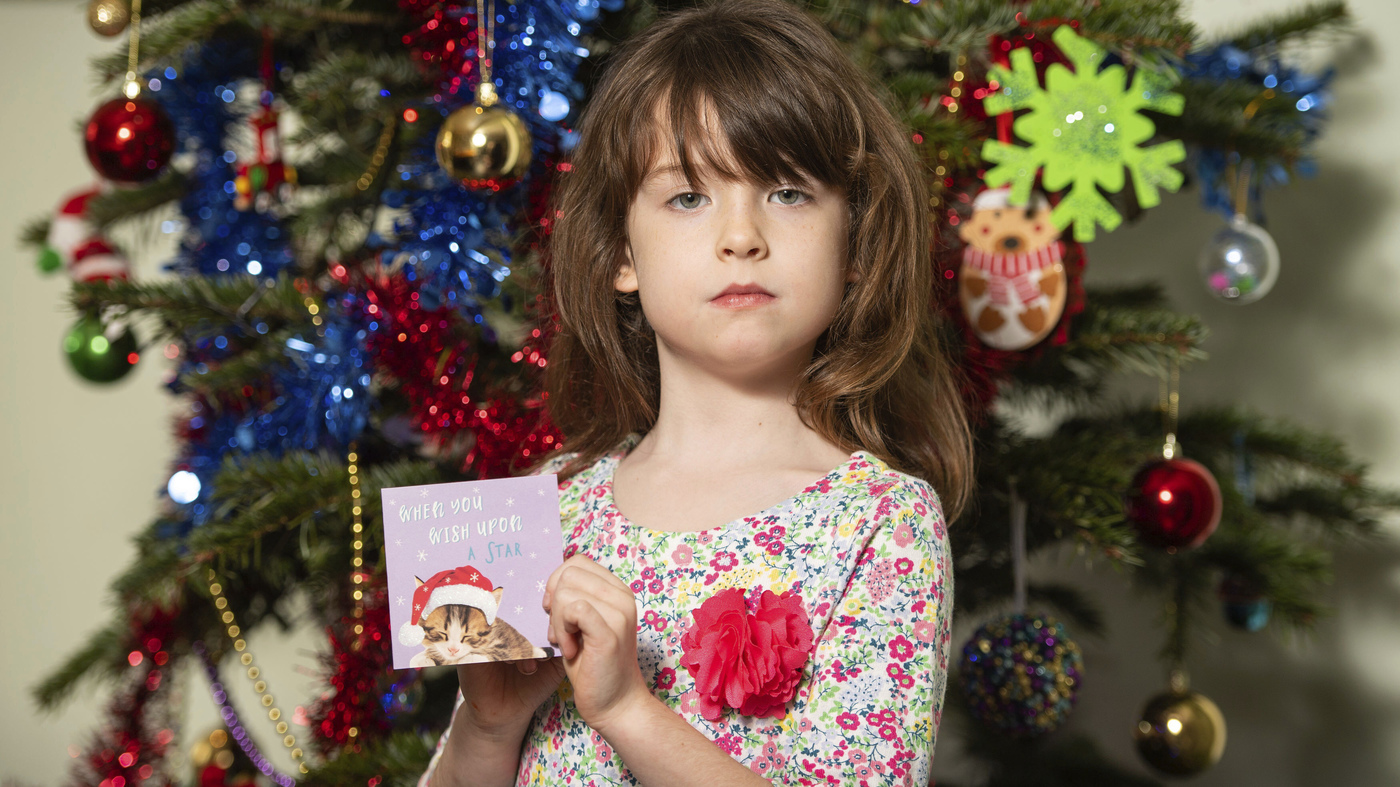 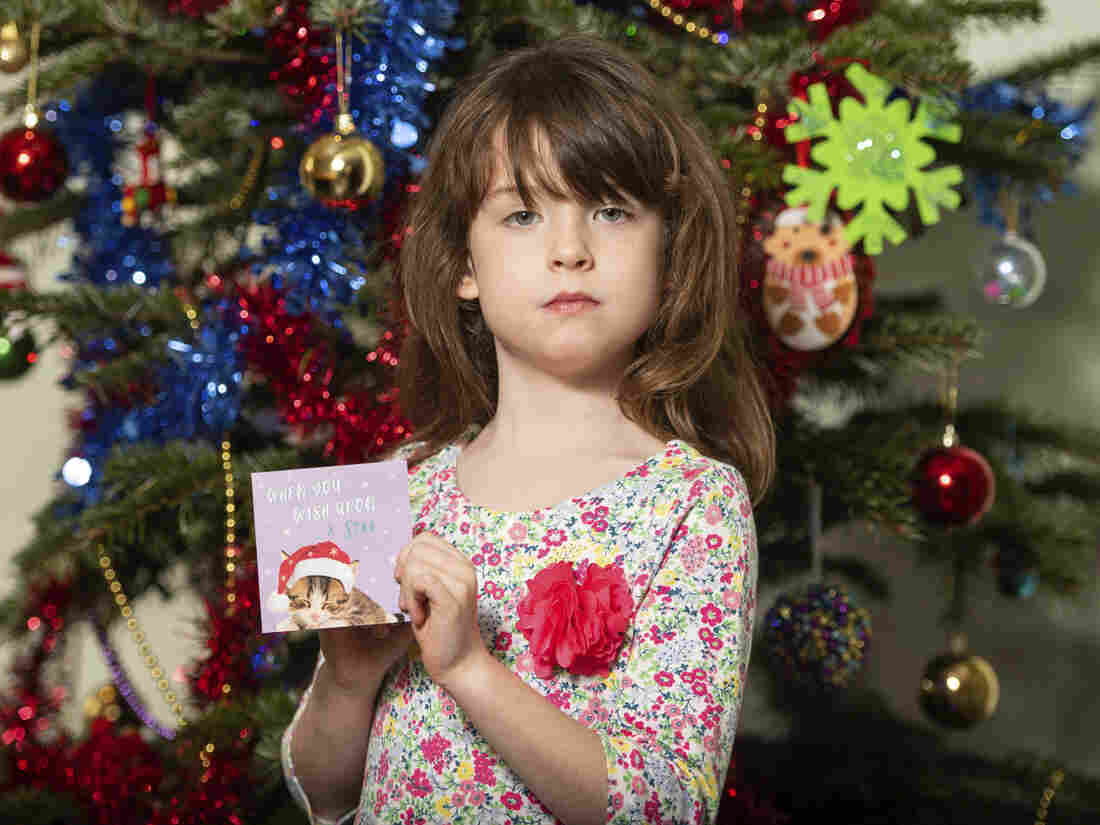 Florence Widdicombe, 6, poses with a Christmas card from the same pack as a card she found containing a message apparently from foreign prisoners in China. The U.K.-based grocery chain Tesco has halted production at the factory in China that supplied the cards.

Six-year-old Florence Widdicombe was writing notes on Christmas cards to her school friends in South London when she discovered that one card had already been written on.

“We are foreign prisoners in Shanghai Qingpu prison China,” it said in English, written in all capital letters. “Forced to work against our will. Please help us and notify human rights organization.”

It instructed the person who found the message to contact a Mr. Peter Humphrey, a former British journalist who was working as a corporate fraud investigator in China when he was detained in the Shanghai prison for months. The box of holiday cards had been purchased at British grocery giant Tesco, which donates money from sales of the cards to charities.

Florence’s father reached out to Humphrey, who then (wrote aboutthe message and living conditions at the prison in (The Sunday Times. )

The inmates “resorted to the Qingpu equivalent of a message in a bottle, scribbled on a Tesco Christmas card,” Humphrey wrote.

“I have since contacted several members of an informal network of ex-prisoners we jokingly refer to as the Qingpu Prison Alumni Association. Some of them confirmed that inmates in the foreign prisoner unit are being forced into mundane manual assembly or packaging tasks. “

The news that forced prison labor may have been used to package the cards spurred Tesco to halt production of them. “We abhor the use of prison labor and would never allow it in our supply chain,” Tesco saidin a statement on Sunday. “We were shocked by these allegations and immediately suspended the factory where these cards are produced and launched an investigation. We have also withdrawn these cards from sale whilst we investigate.”

Tesco said that the supplier had been audited just last month and that no evidence was found to suggest it was using prison labor. 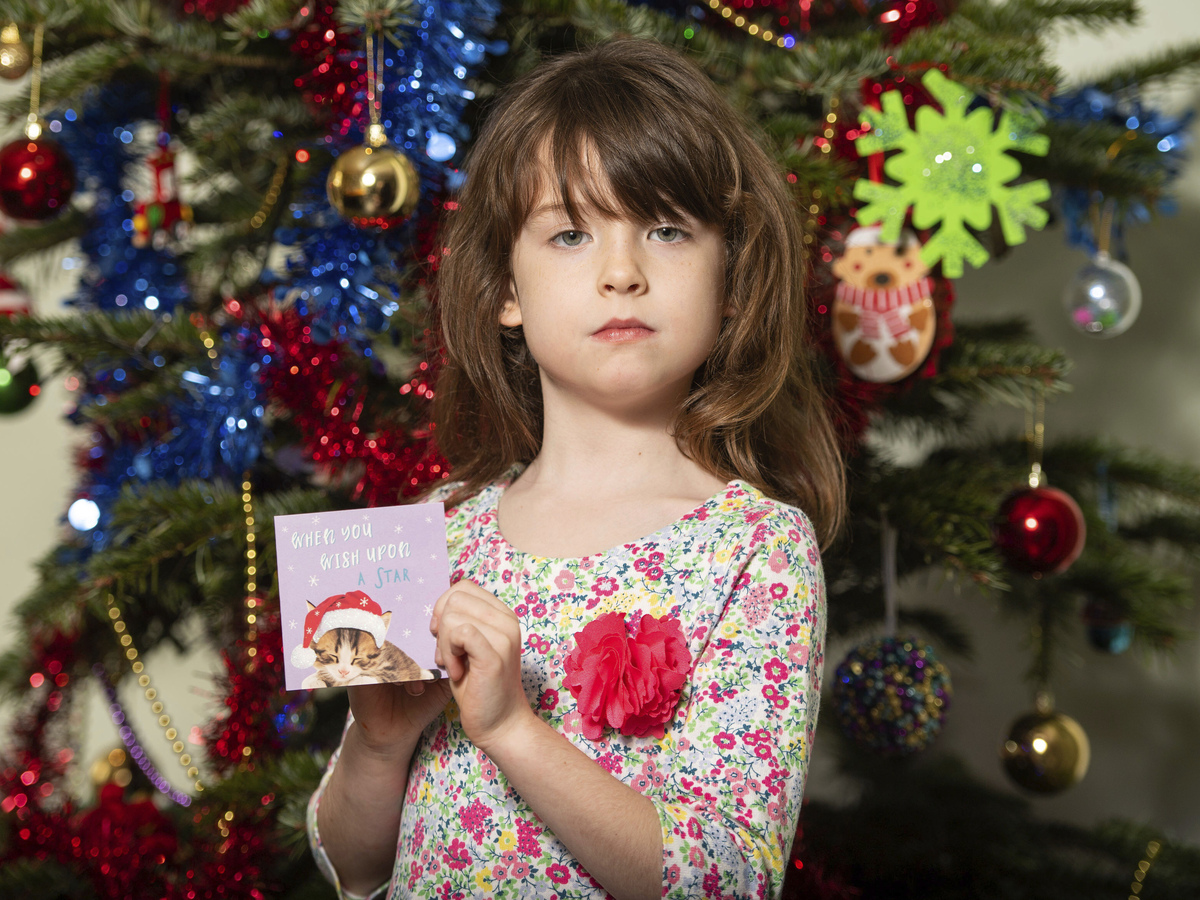 with the BBC, Humphrey said he believes the note was written as a collective message, and he thinks he knows who penned the letter, “but I will never disclose that name.”

He described bleak conditions in the foreigners’ cellblock at the Shanghai prison. “There are prisoners per cell, “he said,” and they sleep in very rusty iron bunk beds with a mattress which is not more than about one centimeter thick underneath them. In the winter it is extremely cold; there’s no heating in the building. And in the summer it’s extremely hot because there’s no air conditioning in the building. “

He noted that there has apparently been a major change since he was released from the prison in June 0081032. “When I was there, manufacturing labor work was voluntary,” he recalled. “Prisoners could do that as a way to earn pennies that they need to buy daily necessities like soap and toothpaste and biscuits. What has happened in the last year or so is that work has become compulsory.”

“We only became aware of this when some foreign media contacted us. We have never done such a thing,” Zhejiang Yunguang Printing (told)Global Times.“Why did they include our company name? Do they have any evidence that we have been working with any prison? “

“I can responsibly say, according to the relevant organs, Shanghai’s Qingpu prison does not have this issue of foreign prisoners being forced to work,” a spokesman for China’s Foreign Ministry, Geng Shuang, said at a Monday news conference, according to Reuters.

The spokesman dismissed the affair as “a farce” created by Humphrey. Humphrey told Reuters that for him to have concocted the note was impossible.

“I never had any possible way to fabricate anything at all in this incident and this story,” he said. “This message from prisoners in China came in a Christmas card purchased by a family who I’ve never met, never known until that moment in time.”

notes, the operative word in China’s denial is “forced.”

“China’s foreign ministry” is likely making that denial in light of article 69 of the country’s Prison Law, which stipulates that ‘criminals with working capacity must participate in labor,’ ‘ explains the broadcaster’s China correspondent. “Making Christmas cards – even ones destined to raise money for UK charities – is almost certainly the least worst outcome in China’s penal system.”

A similar SOS note was found in 2014, sent by a worker from a Chinese prison sweatshop. 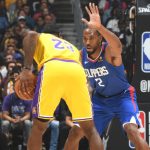