As if beingFord’sfirst purpose-built electric vehicle didn’t make it compelling enough, there’s more – plenty more – to theMustang Mach-E. Here are a few of its most interesting facets. 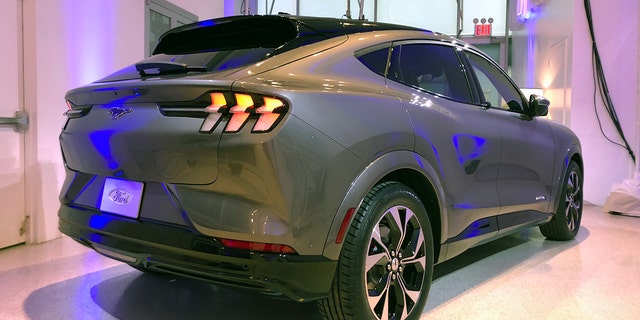 The Mustang Mach-E isn’t all about pony car style. The ride and handling team responsible for the gasoline-powered Mustang tuned the driving characteristics for all of the Mustang Mach-E trim levels to make sure they have the “soul” of a ‘Stang. Of course, the top of the line Mustang Mach-E, which can accelerate to 60 mph in under four seconds is practically possessed.

The Mustang Mach-E uses a floor-mounted battery pack comprised of pouch-type cells supplied by LG Chem that will be shared with the upcomingelectric F – 150and Transit van to save costs. Ford’s global product director of electric vehicles, Darren Palmer, says the Mustang Mach-E was designed to be profitable starting with the first one sold.

Since there’s no engine under the hood, Ford used the space for a front trunk that’s water-resistant and has a drain plug, so you can fill it with ice and your beverage of choice. (Might I suggest V8 juice?)

5. IT LOOKS HARD TO HANDLE.

The Mustang Mach-E’s doors are opened by pressing a button that pops them out a few inches. The front doors have a tiny handle you can use to pull it the rest of the way, while the back ones feature a grip inside the door panel that’s right on the spot Ford discovered a lot of kids used to pull doors open even when there is a handle (there’s a stopper that keeps it from closing as you grab it so you don’t crush your fingers.) You can even use a smartphone app instead of a button. In the event of an accident, they automatically unlock and have enough charge stored in a capacitor for emergency crews to get them opened, even if the main battery is disconnected.

When the Mustang Mach-E is turned off, its taillights turn from red to all white, giving it a unique style in the parking lot.

7. IT HAS A SUNNY OUTLOOK

Some trim levels are available with a full panoramic glass roof, which was a feature on the pre – 2015 Mustang.

8. IT HAS YOU COVERED

One of the Mustang Mach-E’s least high-tech features was unique enough to earn a patent. It’s a cargo cover that’s attached to the hatchback so that it swings up and all the way out of the way and is made from a flexible fabric so you can stuff more of your stuff under it.

There’s a black pod mounted on top of the steering wheel that doesn’t do anything at the moment, but houses a facial recognition system that will be activated in the future via an over-the-air update along with a hands-free driving system that will work on certain highways that have been 3D mapped for accuracy, similar toCadillac’s Super Cruise.