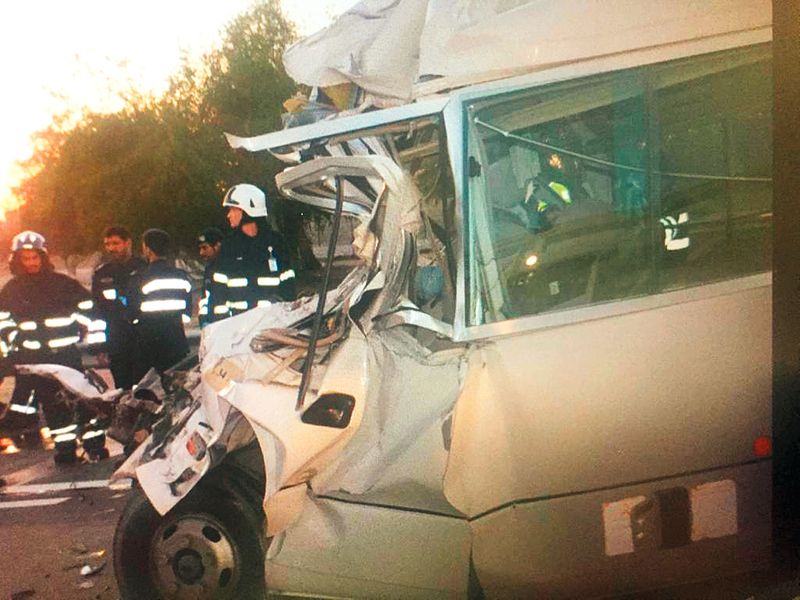 Abu Dhabi: The body of the bus driver killed in a crash that left six people dead last week was repatriated on Sunday, Gulf News has learnt.

Naimat Ullah Abdur Rehman had been licensed as a bus driver since July 2016, and had always been a careful driver, his cousin, Esmail, 45, told Gulf News.

“He left behind two young daughters and a wife, and until his body reached, we were unable to inform them that he had died. We just kept saying he was badly injured,” Esmail said, breaking down into tears.

“Naimat Ullah was always careful, and took good care of himself so he could give his best while on the job. He was happy and religious, and his loss, though fated, is a great one,” he added.

Six people died when a bus crashed into the back of lorry in Abu Dhabi last Thursday (January 16)
Image Credit: Supplied

Naimat Ullah had been driving the bus that crashed into a lorry last Thursday (January 16). As seen in a video released by Abu Dhabi Police, the sudden halting of a white sedan near an exit on Al Raha Beach Road forced two lorries travelling behind it to stop as well. The bus following them was however unable to stop, and crashed into the back of the second lorry.

Esmail works in the same transportation company, and he said five buses carrying passengers travel on that route every morning.

Day of the crash

“The buses pick up workers from Abu Dhabi city and drop them off at their workplace in Shahama. That day, I got a call from one of my colleagues saying he had just passed Naimat Ullah’s bus on the road, and that it appeared to have been in a bad accident,” Esmail remembers.

He rushed to the site, but it took more than an hour to extract Naimat Ullah from the wreckage.

“We could tell he had died on the spot. Although his upper body was fine, his legs were badly injured and he had lost a lot of blood,” Esmail said.

Apart from his wife and daughter, Naimat Ullah is survived by his elderly parents, a stepmother, five brothers and a number of sisters. The family lives in a village called Kahi in northwestern Pakistan.

“He was part of a joint family, but he will be terribly missed,” Esmail said.

The driver earned about Dh3,000 a month, sending more than two-thirds of it back home to his family. His body was taken to Pakistan by one of his brothers, who also works in Abu Dhabi as a driver.

As Gulf News reported on Friday, the accident also left three Nepali women dead. The women – Krishna Kumari Adhikari, 44, Bhavana, 24, and Amisha, age unknown – had been among 24 passengers on the bus who worked as cleaning staff at schools in the capital. A Sri Lankan woman was also killed but the nationality of the sixth victim remains unknown.

One of the passengers who sustained injuries from the crash spoke to Gulf News anonymously, saying that Bhavana had been waiting to travel back home to see her family.

“Bhavana and I sometimes spoke, and she recently told me she was missing her family a lot. She said she had not seen them in five years, and that she was due to go home in a month. Now that will never happen,” she said.

The post Abu Dhabi bus crash driver was careful and always gave his best appeared first on The Wealth Land.