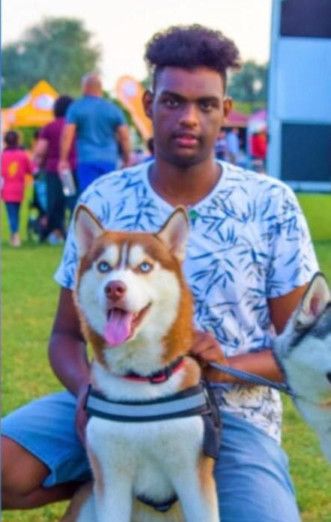 SHARJAH: A Sudanese teen reclaimed his stolen prize-winning Siberian Husky from a dog thief by reeling off the pet’s 21-digit microchip number which he remembered from memory.

The bizarre incident took place last fortnight when Ahmed Alaaeldin, 18, found himself locked in an ownership dispute with the thief just as he was about to sell the canine at the Birds and Animal Market in Al Jubail, Sharjah.

“The thief had even managed to get a pet passport for my Maron under the name of Alex. He just wouldn’t listen to me,” recalled Alaaeldin.

“When everything failed, I asked the man if he would forego his claim if I spelled out the dog’s microchip number. He readily agreed thinking that there was no way I would remember a 21-digit number. So we went to a nearby pet clinic where a vet scanned the Maron’s microchip and confirmed that the numbers matched with the ones I gave out. The thief looked in disbelief, handed me the dog and quietly slipped away,” said Alaeeilien, who had announced a Dh1,000 reward for any information on the 17-month old dog which had gone missing on January 21.

Alaaeldin, who lives in Al Ain, said he had given Maron under the care of his Jordanian friend in Al Rashidya, Ajman, as he was travelling to the United Kingdom the next day.

“Imagine my horror when he called me to say that Maron had disappeared,” said Alaeeildin.

“My heart sank. I immediately cancelled by flight ticket. Early next morning I took a bus to Sharjah before reaching my friend’s house by cab, carrying nearly 2,000 missing dog flyers.”

Alaeeildin said he looked for Maron from 10am till midnight scouring every neighbourhood in the vicinity.

“That day. I clocked 60km, according to my smart band fitness tracker. I told myself I won’t return to Al Ain until I had found Maron. I was like a man possessed,” he said.

“By then it had become obvious that Maron was not lost; he had been stolen.”

The following day, Alaeeildin headed to the animal market in Sharjah hoping to find some clues. “I looked up a couple of pet clinics outside the market but just when I was about to enter the place I saw a man walking Maron on a leash. I called Maron and he instantly stopped in his tracks and started wagging his tail. When I confronted the man he claimed that the dog belonged to him and refused to relent. I gave him the description of the tattoo in Maron’s inner right ear but the thief remained adamant until I called out his bluff by taking him to a vet and reeling out the pet’s microchip number,” he said

“Maron is very special to me. He is a six-time champion. I don’t know how I could have possibly lived without him,” he said.