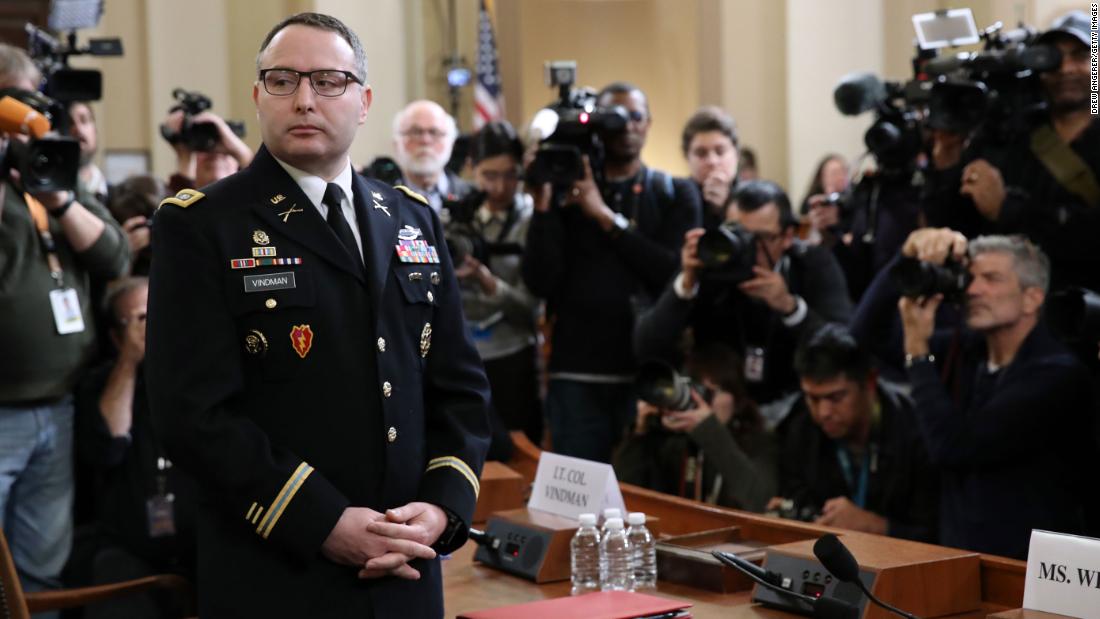 Washington (CNN)Lt. Col. Alexander Vindman, the National Security Council officialtestifying publicly as part of the House impeachment inquiryinto President Donald Trump, has reached out to the US Army about the security of his family as he comes under repeated attack by Trump and his allies.

Vindman testified before congressional lawmakers on Tuesday, telling them that Trump’s push for Ukraine to investigate former Vice President Joe Biden on a July call was “inappropriate,” and he knew ” without hesitation “that he had to report it. There is no evidence of wrongdoing by Biden in Ukraine.

“It is improper for the President of the United States to demand a foreign government investigate a US citizen and political opponent, “Vindman said in his opening remarks on the third day of public impeachment hearings.

In hisopening remarks, the Iraq War veteran touched on the safety of his family as he expressed gratitude that his father had made the decision to emigrate to the US from Soviet Union.

“I’m grateful to my father’s – for my father’s brave act of hope 40 years ago and for the privilege of being an American citizen and public servant, where I can live free and – – free of fear for mine and my family’s safety, “Vindman said.

Vindman had been on the July 25 phone call between Trump and Ukrainian President Volodymyr Zelensky, after which Vindman reported his concerns to an NSC lawyer. Vindman’s closed-door testimony to the House committee about those events sparked a slew of attacks.

The President has taken to Twitter to denounce Vindman, who was awarded a Purple Heart for his service in Iraq, as a “Never Trumper.” Vindman has also faced numerous attacks from Trump’s allies, and had his judgment questioned by other White House officials.

The defense official said that because of the concerns Vindman and his family have expressed, the Army is taking steps it would normally pursue in these situations, coordinating with local law enforcement and checking the Vindmans’ computers.

The defense official told CNN there has been no serious consideration of moving the family yet, but said that in theory the Army would take such a step if the security situation merited it .

CNN’s Jeremy Herb and Manu Raju contributed to this report