Amazon Studios has announced four new cast members forThe Wheel of Time, the long-awaitedTV adaptationof the lateRobert Jordan‘s bestselling14 – book seriesof epic fantasy novels,Deadline Hollywood reports. Clearly, Amazon has joined the hunt for the nextGame of Thrones, since within the fantasy genre, Jordan’s series is as popular as George R.R. Martin’sASong of Ice and Fire. The first season of the TV adaptationstarted shootingon September 16 – coincidentally, the 12 th anniversary of Jordan’s death in 2007.

The TV series will center on Moiraineplayed byOscar-nominee Rosamund Pike), a member of a powerful , all-woman organization called the Aes Sedai. (In this world, magic exists, but only certain women can use it — ie, the members of the Aes Sedai.) She identifies four young people, one of whom could be the reincarnation of a person who, prophecies say, will save or destroy humanity. Together, the youngsters embark on a journey across the world.

AsArs reportedearlier this year, the first round of casting included Josha Stradowski as Rand al’Thor, aka The Dragon Reborn, He Who Comes With the Dawn, the Coramoor, Shadowkiller, and who knows how many other monikers. Marcus Rutherford was cast as apprentice blacksmith and dream-walker Perrin Aybara. Zoe Robins plays healer Nynaeve al’Meara, and Madeleine Madden plays the powerful channeler Egwene al’Vere. Finally, Barney Harris was cast as series comic relief Matrim Cauthon.

Hammad Animashaun (Black Mirror) ) has been cast as Loail, a close friend to Perrin the dream walker and Rand al’Thor. Loail is an ogier, a human-like species described in the books as big, strong, and hairy, which might belie (to the casual observer) their intelligence and peaceful natures. (Ars’ own Lee Hutchinson described the species as “what if you had elves, but they were ogre-sized and looked like ogres.”)

Alexandre Willaume (Tomb Raider) will portray Thom Merrilin, a “Gleeman and adventurer” —basically a traveling bard, playing in villages rather than royal courts, skilled in juggling, fireworks, tumbling, songs, instruments, and so forth. The other two newly announced cast members will play supporting characters. Johann Myers will play the villainous Padan Fain, and Alvaro Morte will play Logain. 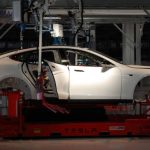