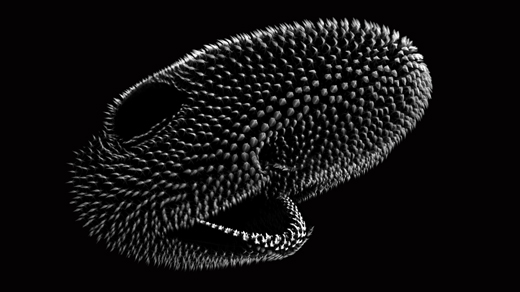 A primordial developmental toolkit shared by all vertebrates, and described by a theory of the mathematician Alan Turing, sets the growth pattern for all types of skin structures.

An image of a whole catshark hatchling stained to reveal its “skin teeth ”denticle patterning. Two parallel rows near the dorsal fin show where the development of the denticles initiated. The denticles then spread out to dot the rest of the body in keeping with the action of a Turing-like mechanism.

(In) , well before developmental biologists spoke in terms of (Hox) genes and transcription factors, or even understood DNA’s structure , Alan Turing h ad an idea. The famed mathematician who hastened the end of World War II by cracking the Enigma code turned his mind to the natural world and devised an elegantmathematical model of pattern formation. His theory outlined how endless varieties of stripes, spots and scales could emerge from the interaction of two simple, hypothetical chemical agents, or “morphogens.”

Decades passed before biologists seriously considered that this mathematical theory could in factexplain myriad biological patterns. The development of mammalian hair, the feathers of birds and even those ridges on the roof of your mouth all stem from Turing-like mechanisms.

Now, denticles, the toothlike protrusions that cover the skin of sharks, can be added to the list. Researchers from the University of Florida recently discovered that shark denticles arelaid down by a Turing-like mechanismdirected by the same genes responsible for feather pattern formation. According toGareth Fraser, the researcher who led the study, the work suggests that the developing embryos of diverse backboned species set down patterns of features in their outer layers of tissue in the same way – a patterning mechanism “that likely evolved with the first vertebrates and has changed very little since.”

“The beauty of this work is that it shows that there might be a very strong conservation of this mechanism for forming anything from shark denticles to bird feathers, ”saidAlexander Schier, a Harvard developmental biologist who was not involved in the study. This study bolsters a growing theme in developmental biology, that “nature tends to invent something once, and then plays variations on that theme,” Schier said.

Turing’s model, called a reaction-diffusion mechanism, is beautifully simple. It requires only two interacting agents, an activator and an inhibitor, that diffuse through tissue like ink dropped in water. The activator initiates some process, like the formation of a spot, and promotes the production of itself. The inhibitor halts both actions. Critically, the inhibitor spreads through tissue more quickly than the activator does. This faster diffusion of the inhibitor prevents pockets of activation from spilling over. Depending on exactly when and where the activator and inhibitor are released, the pockets of activation will arrange themselves as regularly spaced dots, stripes or other patterns. 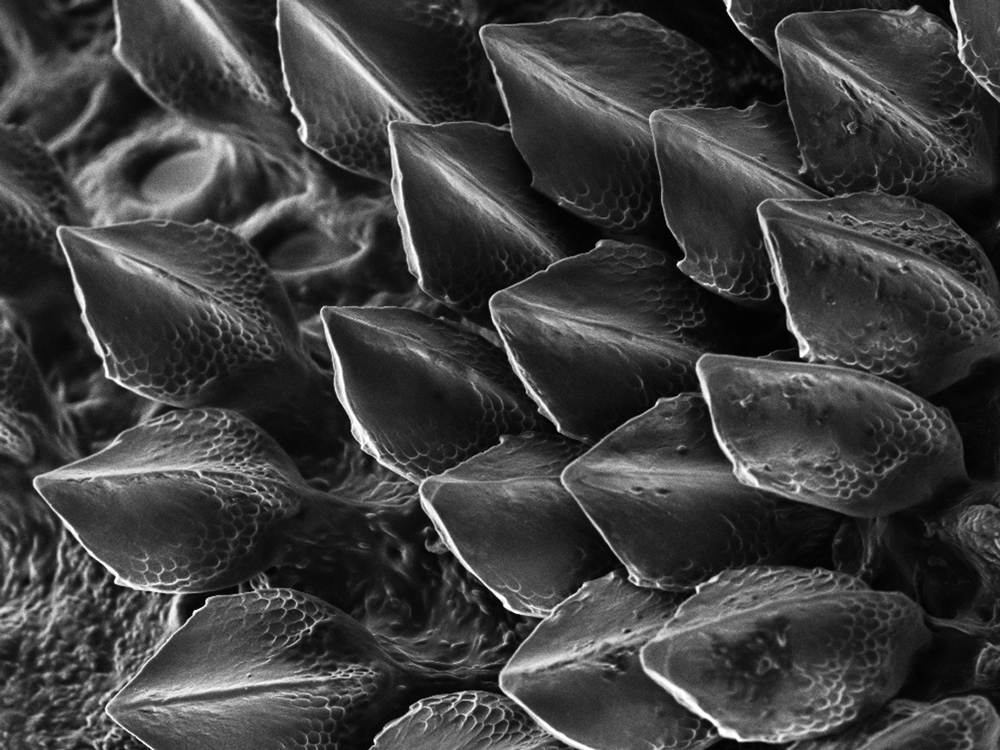 A close-up of the toothlike denticles on a shark hatchling shows how they armor the body like scales.

A scan of the denticles on the head of a young shark reveals the Turing pattern in their arrangement.

A close-up of the toothlike denticles on a shark hatchling (left) shows how they armor the body like scales. A scan of the denticles on the head of a young shark (right) reveals the Turing pattern in their arrangement.

Catherine Boisvert, a developmental biologist at Curtin University in Australia, explains that this activation-inhibition system is a powerful developmental motif. If you’re trying to build a fully formed structure like a feather or denticle, you “can’t have overcrowding,” she said. “Without spacing in between, you’re never going to get a distinct entity.”

According to Schier, Turing’s model excites developmental biologists because “despite its simplicity, it can explain a lot of diverse patterns. ”Yet in practice, very few instances of patterning in nature have been definitively pinned to a Turing-like mechanism.

Two such instances are in the patterns that set out the positions ofhair follicles in miceandfeathers in chicks. In a developing chick, proto-feathers pop up sequentially, forming a single straight line down the chick’s back. That initial row stimulates the production of parallel rows that cascade down the sides of the embryo until it’s covered. Critically, researchers know the molecules that perform activator and inhibitor roles, confirming the process is Turing-like.

Rory Cooper, a graduate student in the Fraser lab, thought shark denticles seemed to develop similarly. Yet sharks, and their cousins ​​the skates and rays, split off from the rest of the vertebrates 450 million years ago.

“They sit in a very interesting place on the tree of life,” said Cooper, as he explained that sharks offer a view of early vertebrate development. Hundreds of millions of years before mammals grew hair and birds sprouted feathers, sharks had denticle “scales” that covered their skin like armor. (They are the oldest living vertebrate lineage with any kind of skin appendage.) The patterns, forms and functions of denticles are diverse: Thickly overlapping denticles provide some sharks with extra protection, while more sparse and sleek patterns reduce drag for nimbler sharks. In some shark species, denticles even house bioluminescent bacteria thataid communication. Yet, notwithstanding some minor differences, the developmental patterning similarities between denticles, hair and feathers are undeniable.

To demonstrate that shark denticle patterning could in principle arise from a Turing-like mechanism, Fraser’s colleagues built a mathematical model of activator and inhibitor interactions. They tinkered with the diffusion, production and degradation rates of the two morphogens until the model produced patterns that matched those of developing shark skin. “The model told us that, theoretically, a Turing-like mechanism could explain pattern formation in sharks,” Cooper said. 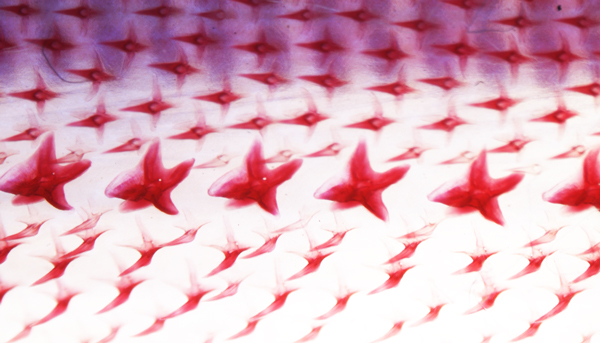 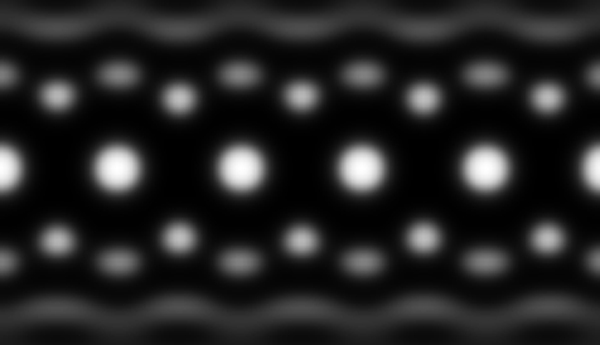 The arrangement of denticles on a stained shark embryo (left) closely mirrors the pattern produced by researchers’ mathematical Turing model.

The molecular underpinnings of denticle development were not known, as they were for feathers. Given the similarity in development, however, the chick genes were a good place to start. When Cooper used in situ hybridization, a technique that can illuminate gene expression in developing tissue, he saw that the same genes light up during pattern formation in both chicks and sharks. “Not only are those genes expressed when the [denticles] are popping up, they’re actually expressed in the same tissue layers, which is quite strong conservation,” Cooper said.

Demonstrating similar gene expression for similar processes is a good first step, but the gold standard of proof in developmental biology is a knock-down experiment: If you reduce or eliminate the expression of a gene and the pattern then disappears, that gene must play an important role in pattern production. To do this, Cooper loaded tiny beads with a chemical that inhibits the chick feather activator. He then implanted the beads alongside proto-denticles in the shark embryo and watched as the shark grew.

The results were clear. The beads, designed to inhibit the expression of activator genes in a bird, could reach across hundreds of millions of years of evolution and exert an identical effect in a shark. Cooper found that activator gene expression plummeted next to the beads, forming a flat “dead zone” devoid of denticles.

“The results of these manipulations make really quite a strong case that this mechanism is deeply conserved,” Schier said.

To test whether a Turing-like mechanism could create the wide range of denticle patterns seen in other sharks and their kin, the researchers tweaked the production, degradation and diffusion rates of the activator and inhibitor in their model. They found that relatively simple changes could produce patterns that matched much of the diversity seen in this lineage. The skates, for example, tend to have more sparsely patterned denticles; by either increasing the diffusion rate or decreasing the degradation rate of the inhibitor, the researchers could make more sparse patterns emerge.

Once the initial pattern is set, other, non-Turing mechanisms complete the transformation of these rows into fully formed denticles, feathers or other epithelial appendages. “You have these deeply conserved master regulator mechanisms that act early on in the development of these appendages,” Boisvert explained, “but downstream, species-specific mechanisms kick in to refine that structure.” Still, Boisvert stressed how remarkable it is that the mechanism underlying so many different biological patterns was theorized “by a mathematician with no biological training, at a time when little about molecular biology was understood.”

Turing mechanisms are theoretically not the only ways to build patterns, but nature seems to favor them. According to Fraser, the reliance on this mechanism by so many far-flung groups of organisms suggests that some kind of constraint may be at work. “There simply may not be many ways in which you can pattern something,” he said. Once a system emerges, especially one as simple and powerful as a Turing mechanism, nature runs with it and doesn’t look back.

“Biological diversity, across the board, is based on a fairly restricted set of principles that seem to work and are reused over and over again in evolution, ”said Fraser. Nature, in all its exuberant inventiveness, may be more conservative than we thought. 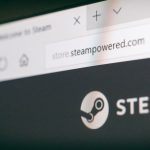 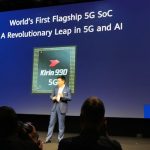