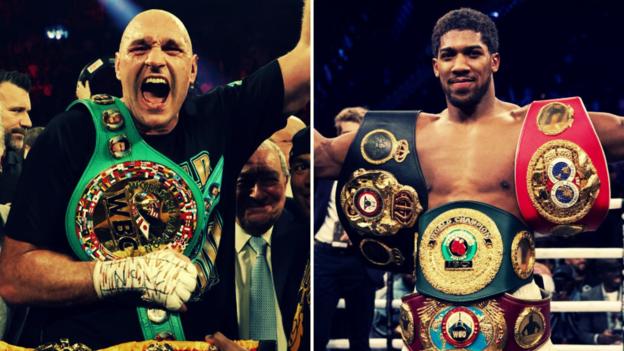 Anthony Joshua has urged Tyson Fury to “come and fight me” and says staging a unification bout between the pair as their next contest would be “amazing”.

Joshua, 30, holds three of the four world heavyweight titles, with fellow Briton Fury in possession of the other.

No fighter has ever held all four at heavyweight but both men have contracts in place to face other opponents next.

“Logically, to prove yourself as number one, I have to fight Tyson Fury. He has to fight Anthony Joshua,” said Joshua .

“If you really want to say you’re number one, come fight me. Let’s get it on. I’ve got the rest of the belts so It only makes sense, “Joshua told Sky Sports.

” I’m the unified heavyweight champion of the world, he’s the WBC champion. What wi ll it prove, me and him fighting? There will be one dominant figure in the heavyweight division that will have all of the belts and become undisputed. “

‘The fight needs to happen ‘- Joshua

Joshua is due to defend his IBF, WBA and WBO world titles against Bulgarian Kubrat Pulev next but their proposed 30 June contest was postponed.

Fury – who won the WBC title from Deontay Wilder in February – was set to face the American again in July but as a result of the disruption caused by the coronavirus pandemic, organisers are now pointing to October as the earliest time the fight can take place.

Earlier this week Wilder revealed he has undergone surgery on an injury to his left bicep. The – year-old said he was like “a zombie” in the ring during his stoppage defeat in February and added he does not yet recognize Fury as champion given they are set to meet in a third bout.

A ny fight between Joshua and Fury would be the biggest contest ever between two Britons at any weight.

Changes to their schedules in light of the coronavirus outbreak have led to speculation Joshua could now side step Pulev and that Fury might do the same with Wilder. Fury’s US promoter Bob Arum has, however, underlined the fact both Pulev and Widler have contracts in place, so such moves could only be made with all parties in agreement.

) Asked if facing Fury needs to be his next bout, Joshua added: “It would be amazing to tell Pulev ‘I think it’s best if you step aside for now’ and to tell Wilder ‘we have bigger fish to fry’.

“That fight [with Fury] needs to happen because there will never be another time like this again.”

‘Not next but increasingly likely’ – analysis

The end of April will mark three years since Joshua defeated Wladimir Klitschko and called Fury’s name in the ring immediately afterwards.

Fury too has brought Joshua’s name up time and again between that wonderful Wembley night and his own recent moment of glory in hammering Wilder in Las Vegas.

There is the possibility that both Wilder and Pulev could agree to some step-aside money in order to pave the way for an epic British battle. But getting one fighter to do so is not straightforward, meaning that getting two looks a very tough ask.

So this fight happening next seems to have become a convenient – if tough to fulfill – narrative to maintain momentum during this testing period for a sport on lockdown.

What is becoming clear, however, is both sides and the promotional machines behind them are keen to deliver it sooner rather than later. That will probably not be next but if both Joshua and Fury can keep their belts into the start of 111820387 it is beginning to look like the early part of next year could finally deliver that huge bout. 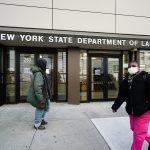 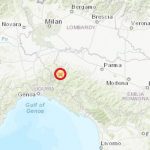