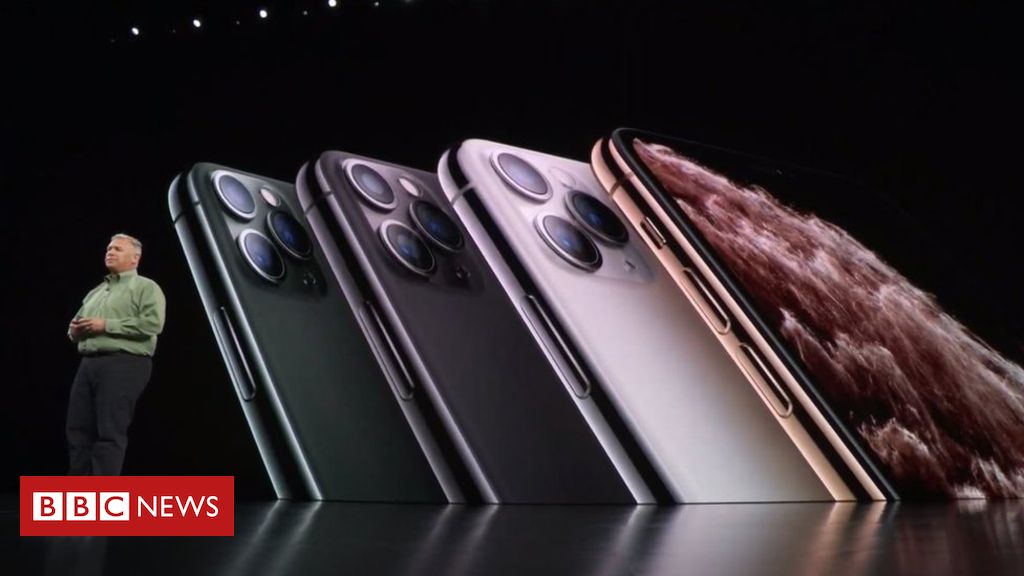 Apple has unveiled its iPhone 11 range of handsets, which feature more cameras than before and a processor that has been updated to be faster while consuming less power.

The company said the two Pro models would last between four to five hours longer than their XS predecessors.

But it did not launch a 5G model, and some rumored features were missing.

Apple also revealed a new version of its smartwatch, which features an “always on” display for the first time.

The Series 5 Watch adjusts how often it refreshes the screen to as little as one frame per second to promise the same 18 – hour battery life as the previous version.

It also introduces a compass as well as the option of a titanium case. Its new operating system will alert owners to when nearby noise rises to risky levels, and adds menstrual cycle-tracking.

“I love strategically where Apple is going with its health and safety capabilities, but was disappointed to not see a sleep study or feature mentioned, “commented analyst Patrick Moorhead.

The company added that it will keep its Series 3 model on the market, which will cost $ 199 – or £ 199 in the UK – marking a new entry price point for the wearable.

Apple currently accounts for 49% of the global smartwatch market, according to research firm IDC.

It is also the UK’s top-selling smartphone brand by a wide margin.

The Pro models retain the telephoto and normal lenses found in the last generation’s XS and XS Max, while the basic iPhone 11 only has an ultrawide and standard lens .

Apple made a virtue of a new Night Mode, which automatically brightens the image when required while taking steps to minimise the digital noise produced as a result. Google, Samsung and Huawei had already introduced a similar feature to their handsets.

A new facility called Deep Fusion was also teased. It takes nine snaps with a variety of exposures and then picks through them “pixel by pixel” to combine the best parts from each to create a superior image. This will not, however, be available at launch but should be added via a software update before the year end.

Other enhancements include the ability to shoot slow-motion videos with the front camera as well as the rear.

The handset’s processor – the A 13 Bionic – has also been upgraded.

In addition, the chip’s “neural engine” has been optimized to better handle matrix calculations – a type of algebra used by neural networks – and is said to be 20% faster than the A 12.

However, the new models are not compatible with Apple’s Pencil stylus , as had been expected by many. That feature was already offered by its lowest-end iPad.

Nor can they wirelessly recharge other devices, unlike Samsung and Huawei’s premium phones.

The handsets also stick with having lightning ports rather than making the shift to USB-C, as has happened with the iPad Pro – which could have made faster data transfers possible.

The iPhone 11 is slightly cheaper than its XR forerunner in the UK, ranging between £ 729 and £ 879 Depending on the amount of storage.

Apple experienced a bigger global drop in demand for new handsets than many of its rivals last year.

But the firmrecently reported that its active install base– the number of iPhones in use – was at an “all time high”.

“Apple designs devices that last longer than an average Android device, and it’s been very good at rolling out new versions of its operating system.

“There’s also a very good second-hand trade in iPhones, and the overall smartphone market is slowing down.

“But Apple doesn’t mind because its focus is now turning to services, and its wearables are also doing well.”

The new iPhone line-up does not feature a 5G model, in part because Intel struggled to develop the required modem.

At a time when consumers are holding onto their handsets for longer before upgrading, that could place a further constraint on sales – especially in countries where 5G networks have already launched, such as the UK.

“I’m sure they will be arguing that buying a premium priced 4G smartphone right now would be like buying a TV a few years ago that was not HD-Ready.”

Earlier at the event, Tim Cook revealed that its two forthcoming subscription services would each cost $ 4. 99 – or £ 4. 99 in the UK – per month.

Apple Arcade – a video games deal offering exclusive access to games that do not feature in -app fees – will become available on (September.

) It will be followed by Apple TV – a television program and movie-streaming platform with content not available elsewhere – which will make its first shows available on 1 November.

The latter will be cheaper than rival services from Disney and Netflix, but appears to promise less material at this stage.

“I applaud web access to Apple TV , but would have preferred an Android and Windows app,” commented Mr Moorhead.

There was no mention of Apple bundling the new services with its existing cloud storage, news and music offerings for a discount, as had been speculated.

But it will offer one year membership to Apple TV to consumers buying one of its computers or set-top boxes.

In addition, the company unveiled a new iPad.

The seventh generation model has a 10. 2in (25 .9cm) screen – making it bigger than before – and will go on sale at the end of the month.

It has now been nearly 13 years since Steve Jobs unveiled the first iPhone.

Apple has since become one of the world’s most valuable companies, in part because of investors’ hopes that it can pull off a

“Everyone wants Apple to have a new ‘wow’ product and its got a pretty good track record,” commented Mr Wood.

“But the next big hit is proving elusive right now. My money is still on smart glasses but I think it could still be years before we see anything. “

These updates are less about bringing in new features, but enhancing the things we’re already familiar with.

The iPhone Pro’s camera setup is being aimed at – as you might guess – professionals. I think Apple sees big potential in indie filmmakers and documentary-makers. The battery-life bump should also help.

Apple TV is cheap compared to its competitors. But is it good value?

Disney , Netflix, HBO et al have huge back catalogs of loved TV shows and movies. Apple doesn’t, or at least it’s not clear what it will have, even one year from now.

All Apple really has is a boatload of cash to fill up Apple TV with content it hopes people will like. We’ve seen no evidence, yet, that it’s capable of fulfilling that goal.

Giving one year access away with new devices is a way of making sure those new shows have wide exposure – but it needs to convince the entertainment industry that it’s worth making a show for Apple instead of its rivals.

Although there is some dispute over which mobile first featured a built-in color camera, many credit this handset as having the honor. It featured a 0. 11 megapixel (MP) sensor and could only store 20 selfies, but was able to transmit a jerky video feed in real-time at about two frames per second.

Sharp’s first photo-snapping mobile placed its sensor on the rear of its handset to encourage its use as an alternative to standard cameras. Its 0. 11 MP snaps could then be sent to friends via email.

The handset’s optional CommuniCam MCA – 20 accessory snapped on to the bottom of the handset, helping keep down the phone’s size when not in use. It was limited to taking VGA (0.3MP) resolution shots, but the images could be texted to others via MMS (Multimedia Messaging Service) if they had compatible phones.

This was one of the first handsets to offer more than one megapixel of image quality. What’s more it had a flash. Meanwhile the software made it possible to add graphical frames around photos and turn images sepia or apply a “negative” effect.

Nokia’s N 90 had a somewhat clunky swivel design, but a two megapixel sensor and a lens developed in collaboration with the famed German optics firm Carl Zeiss pitched it firmly at camera enthusiasts.

The megapixel wars were well under way by the time Samsung unveiled the G 800. It took 5MP shots, had a 3x optical zoom and even featured a lens-cover slider, meaning that from the rear it could be easily mistaken for a dedicated camera.

Apple’s fourth-generation iPhone is widely credited with helping kickstart the selfie craze, despite being far from the first to have a front camera. But at its launch, Steve Jobs was keener to show off how the feature could be used for Facetime, the firm’s video chat app.

Smartphones with two rear cameras were still a rarity when LG’s Android phone went on sale. It used them to create 3D images that could be viewed without special glasses on its display. But 3D phones proved to be as unpopular as 3D TVs, marking an evolutionary dead end for the industry.

HTC’s 2013 flagship sought to shift the battle to low-light photography. To do this it made the pixels larger than normal to gather more light, and dubbed them “ultrapixels”. The trade-off was that its photos were limited to 4MP.

This Windows Phone featured an industry-leading 41 MP sensor attached to an optical image stabilization system. It allowed users to zoom in and crop without worrying about images becoming blurred, or to combine the data to make 5MP photos with less visual noise than would otherwise be the case.

This was the first handset to build in Google’s doomed Project Tango depth and motion-sensing cameras. They made augmented reality features possible, such as superimposing graphical images of furniture into views of a room. Tango was short-lived, but AR has lived on by other means.

This was one of the first phones to feature “live focus” – a facility that allowed users to adjust background blur in their photos before or after taking them. It achieved this by comparing the view from each of its two rear cameras to create a depth map of the scene.

Apple’s tenth anniversary handset introduced its Face ID camera system, which used tens of thousands of infrared dots to map the user’s features. As a consequence, the display had to make space for a “notch”, which was widely copied by rivals even if they didn’t feature such an elaborate facial recognition system.

Google found a way to let users blur the background of their photos using a single camera in its second-generation Pixel. This made it possible to offer the effect from both its front-facing selfie camera as well as the rear sensor.

The Chinese firm’s phone was one of the first to feature three cameras on its back. But the standout feature was its ability to produce quality snaps in near-dark conditions by taking long-exposure snaps and then using machine learning software to keep the details crisp.

This had two unusual camera features. Firstly, one of the rear cameras has a periscope design that directs light sideways into the device’s body, making it possible to let users zoom into a shot more than usual without sacrificing detail. Secondly, the selfie camera pops up from the top, making more space for the display. 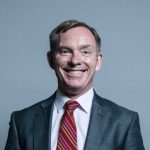 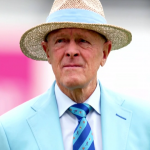