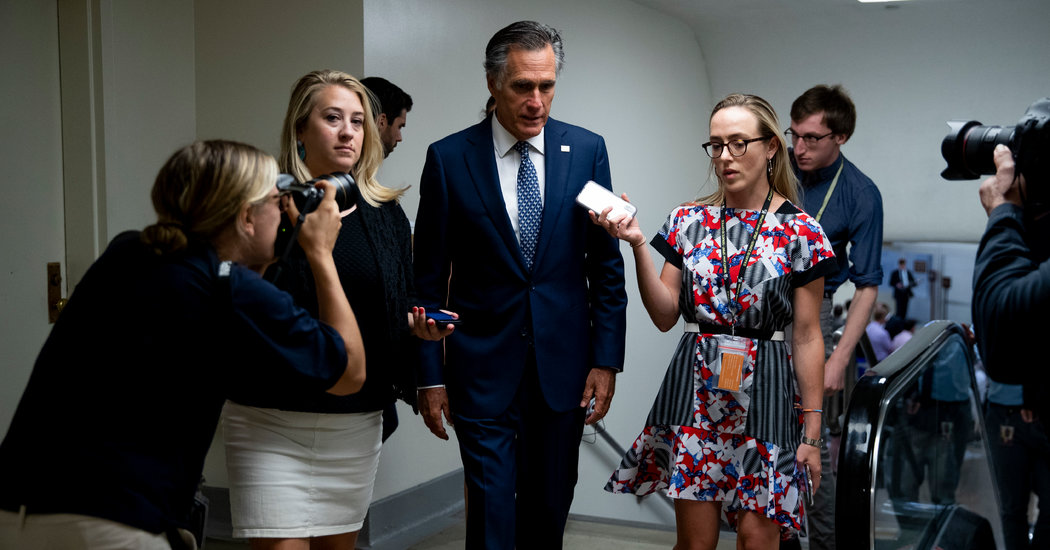 WASHINGTON – As House Democrats push forward with an impeachment inquiry into President Trump, Republicans have largely rushed to Mr . Trump’s defense, or at least tempered their criticism to avoid his furious reprisals.

Among the handful of exceptions, though, there has been none louder or more prominent than Senator Mitt Romney of Utah, a figure who once embodied the essence of the Republican Party before Mr. Trump commandeered it, and is now in a lonely category of his own.

Since the first reports a week ago that Mr. Trump urged President Volodymyr Zelensky of Ukraine to investigate former Vice President President Joseph R. Biden Jr. set off a still-unfolding furor in the capital, Mr. Romney has repeatedly been the first Republican lawmaker to raise concerns about the president’s conduct.

He has pronounced himself “deeply troubled” by Mr. Trump’s effort to enlist a foreign leader for political assistance, and has refused to rule out impeaching the president.

Mr. Romney’s public statements reflect what many in his party believe privately but are almost uniformly unwilling to say: that they are faced with damning revelations about the president that are difficult to explain away, and are unsure of whether there is more damaging material to come. What’s more, they are contending with a leader whose appetite for political payback for real or imagined slights is insatiable, and who is responding to the crisis with angry new threats and accusations that will only increase the pressure on them to choose a side.

It amounts to an unenviable dilemma for Republicans at a consequential moment for the party. Any internal fractures over the next year could undermine both Mr. Trump’s re-election and Republican hopes for retaining their Senate majority and retaking the House.

Romney, who represents a state where he is beloved and is unlikely to seek another office, it is a moment where he believes country should trump party.

“Each person should search their own heart and do what they think is right – which is just what I do,” he said.

Mr. Romney’s willingness to level measured criticism at Mr. Trump has annoyed liberal activists, who see his comments as woefully insufficient to the moment. It has also enraged the president’s most loyal allies, who view the Utah senator as a resentful foe. Yet it could prove most pivotal with a third constituency: his fellow lawmakers.

As Senate Republicans begin to grapple with the unappealing prospect of serving as jurors in the impeachment trial of a president of their own party, Mr. Romney has emerged as a crucial figure.

“He’s in a different place from many politicians still feeling out their place in the party and hoping to be president someday,” said Senator Christopher S. Murphy of Connecticut, a Democrat who has become friendly with Mr. Romney from their service together on the Foreign Relations Committee. “He’s a loyal Republican, but that’s not his first priority – he’s a bit of a throwback.”

Romney and Mr. Trump, it is the latest, and perhaps last, installment of an off-and-never-really-on relationship between two men who shared little more than the same political ambition. It began when Mr. Romney, as the 2012 Republican presidential nominee, solicited Trump’s endorsement, and carried through 2016, when the former Massachusetts governor began the year as a ferocious critic of Mr. Trump but ended it as a supplicant, sharing dinner with a president-elect in hopes of becoming his secretary of state.

Now, though , Mr. Romney holds a crucial position of power. He could be part of an effort to eventually remove Mr. Trump from office, and is already in the ear – and perhaps conscience – of other Republicans.

He plays down his role, noting that he is not attempting to lead any sort of insurrection against the president.

“I spoke out because I believe this is a matter of importance and personal principle,” he said. “Nothing more, nothing less.”

But by reproaching Mr. Trump, he offers Democrats the ability to counter claims that the inquiry is a wholly partisan and politically fueled witch hunt, as the president has repeatedly called it. And Mr. Romney both provides cover for and exerts pressure on his fellow Republicans, who are anxiously calibrating what to say about a scandal that only deepened on Thursday when audio emerged of Mr. Trump privately suggesting that government officials who expressed concerns about his dealings with Ukraine deserve to be punished severely.

The president’s leading advisers recognize the threat posed by as high-profile a figure as Mr. Romney, perhaps the second most well-known elected Republican in Washington, and are trying to isolate him. After his critical remarks about the Ukraine affair, Mr. Trump hit back at the senator byposting a video on Twittershowing a glum Romney at the moment on election night in 2012 that he learned he had lost the presidential race.

“ Mitt Romney is still disappointed he was never elected President of the United States and Donald Trump was, ”said Corey Lewandowski, Mr. Trump’s former campaign manager and a prospect to lead the president’s public relations defense against impeachment.

Mr. Trump’s eldest son, Donald Trump Jr., went even further, saying that Mr. Romney “knows that as long as Donald Trump is leading the GOP he is irrelevant.”

He said Mr. Romney was “desperate to be loved by the left and the media,” and was “forever bitter that my father succeeded where he so embarrassingly failed.”

Yet since Mr. Romney first went public with his alarm on Sunday – saying Mr. Trump’s alleged conduct was “troubling in the extreme” – other Republicans have gradually started to sound notes of concern.

On Wednesday, after viewing the secret complaint of an intelligence whistle-blower who expressed concerns about Mr. Trump’s conduct, Senator Ben Sasse of Nebraska, adopted Mr. Romney’s formulation, calling the report “troubling,” and saying that Republicans “ought not just circle the wagons.” Sasse was once a vocal critic of Mr. Trump, but had dialed back his comments considerably ahead of his 2020 re-election race, and had received the president’s endorsement earlier this year.

Senator Ron Johnson of Wisconsin said on Thursday that he was concerned about the claim in the report that White House officials sought to restrict access to the transcript of Mr. Trump’s call to Mr. Zelensky. Representative Michael Turner, Republican of Ohio and a member of the Intelligence Committee, said at a hearing on the matter that Mr. Trump’s conversation “is not okay.”

Mr. Romney said he was not attempting to steer a party he believes is overwhelmingly in Mr. Trump’s grip. But as the 70 – year-old contemplates what he acknowledges will likely be his last period of public service, his friends say he is appalled by what he sees as the president’s win-at-all-costs immorality and his party’s willingness to remain mum in the face of such misconduct.

Further, he is deeply uneasy with the behavior of Rudolph Giuliani, the president’s personal lawyer and a rival to Mr. Romney in the 2008 Republican presidential primary.

And even as he insisted he was not attempting to nudge other Republicans, it was impossible to miss his indignation.

“I can’t imagine being in the Senate or in any other position of responsibility and looking around to see who’s with you, ”Mr. Romney said. “You stand for what you believe in.”

His challenge as the impeachment debate unfolds will be how to balance his outrage, and leverage his platform, without sounding more sanctimonious than righteous.

Appearing at a forum sponsored by The Atlantic magazine this week, he pointedly separated himself from other politicians, who he suggested were more susceptible to political considerations.

“It’s just in human nature to see things in a way that is consistent with your own worldview and your sense of what’s necessary for the preservation of your position of power,” Romney said. “I don’t know why I’m not afflicted to the same degree as perhaps others are in that regard; perhaps it’s because I’m old and have done other things. ”

Some of his more pro-Trump colleagues are already voicing irritation at Mr. Romney, who they believe is overreacting to the revelations about the president’s dealings with Ukraine.

“I’m very troubled by anybody that’s looking for an excuse to see the downside in this ”said Senator David Perdue of Georgia, repurposing Mr. Romney’s word. The Utah senator, he said, has “an ax to grind.”

Some of Mr. Romney’s associates believe his sense of outrage can shame at least those senators who, as Republican strategist Mike Murphy put it, “have some moral compass.”

But Mr. Murphy, a longtime Romney friend and anti-Trump Republican, said, “it’s going to take a while, even though the news cycle wants this in an hour.”

Jonathan Martin is a national political correspondent. He has reported on a range of topics, including the 2016 presidential election and several state and congressional races, while also writing for Sports, Food and the Book Review. He is also a CNN political analyst.@jmartnyt 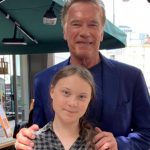 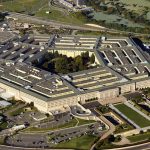