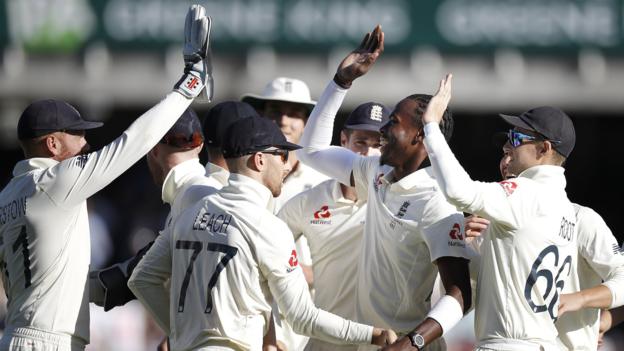 Jofra Archer took 6 – 62 to give England the upper hand in the fifth Ashes Test, despite yet more runs from Australia’s Steve Smith on day two at The Oval.

Pace bowler Archer was supported by three wickets from left-armer Sam Curran – including two in two balls – as the tourists were bowled out for 225.

Through it all, Smith stood firm, and it was his wicket – lbw to Chris Woakes for 80 – that England and their supporters celebrated the most.

It says much about Smith’s stellar summer that this was his lowest score of the series and the inability to reach a century felt like a relative failure.

England batted twice in the day. In the morning they went from 271 – 8 to 294 all out, a total that looked short of par on a flat pitch.

However, that was to discount the incisiveness of Archer and Curran, and the brittleness – bar Smith – of the Australian batting. England were in again 20 minutes before the close.

They were taken to 9-0 – 78 ahead – by Rory Burns and Joe Denly. In a dramatic final over of the day from Josh Hazelwood, Denly was dropped by Marcus Harris at gully and Burns overturned being given lbw off the very last ball.

At 2-1 down, England’s chances of regaining the Ashes have gone, but they are well placed to avoid their first home series defeat since 2014 and first by Australia in 18 years.

They have the opportunity to force Australia out of the game, especially with the surface likely to be deteriorating by the time the tourists come to bat again.

Past problems, glimpse of the future

Before this Test, England captain Joe Root said that his team must use this match as the beginning of their building towards the next Ashes in Australia in 2021 – 22.

It may be that the pace of Archer and the skiddy swing of Curran are the pillars of England’s attack in the future, especially when James Anderson and Stuart Broad retire.

They were the standout performers on a sun-kissed day at The Oval, when a collectively strong England performance was only mildly marred by three missed catches.

Friday began with the news that Denly’s wife had given birth overnight and progressed with steady excitement from a crowd that exploded with noise when Smith was sent on his way.

And, if the likes of Archer and Curran really are England’s future, then so too is the problem of how to dismiss Smith, who gave another reminder that he will remain the biggest obstacle to them regaining the Ashes in two and a half years.

That, though, is for another day. For now, England must pounce on the chance to end this storied summer with a series-leveling victory.

If Curran was England’s find of 2018, when he was man of the series against India, then Archer has been the most important addition of 2019, not only starring in the World Cup win, but becoming the first England bowler to take 20 wickets in his debut series since Dominic Cork in 1995.

With pace up around 90 mph, Archer constantly asked questions of the batsmen, who were challenged with the accuracy of his full deliveries and hostility of the short ones.

David Warner was given caught behind on review, opening partner Harris edged to second slip and Marnus Labuschagne played across a straight one to be lbw. Just as England were going flat after tea, Archer had Mitchell Marsh pull to Jack Leach at fine leg.

By that time, Curran – playing in his first Test of the series – had already pinned Matthew Wade lbw, but it was the right-handers that he really troubled either by swinging the ball in or angling it across.

That was typified by the dual strike. First Tim Paine edged behind, then Pat Cummins was trapped leg-before by a hooping in-ducker.

Smith was the last of four wickets for 37 runs, after which England were held up by Nathan Lyon and Peter Siddle.

In the space of eight deliveries, Archer had Lyon put down by a diving Leach, bowled the same man with a dipping knuckleball, saw Root fail to move when Hazlewood edged his first ball and had Siddle push to gully, where Burns took a sensational one-handed grab.

With the pitch flat and the sun shining, nothing seemed more certain than Smith torturing England’s bowlers again. Despite some early problems against Curran and the resumption of his compelling series-long battle with Archer, he did just that.

Smith arrived at 14 – 2 – Warner’s five was his eighth single-figure score of the series – and received support from Labuschagne but not much else.

He batted as he does; never still and with comical flamboyance. He nurdled off the pads, hit the same part of the cover boundary with drives off front and back foot, and hit spinner Leach for six over mid-wicket.

Slowly, though, Archer and Curran restricted his scoring. He was dropped on 66 by a leaping Root at first slip off the bowling of Curran.

When Curran was replaced, Woakes got one to keep a touch low and a deceived Smith was plumb in front. Such was his disappointment, he could barely drag himself from the crease.

That signalled the start of a swiping stand of 37 between Siddle and Lyon, before Archer had the final word.

‘England should win the game from here ‘- what they said

Former England captain Michael Vaughan:“Apart from Smith and Labuschagne that was a disgraceful batting performance by Australia.

” I wouldn’t be surprised if we get more drama tomorrow. But from this position, England should get enough runs to win the game. “

“That was the best Curran has bowled for England. He wants to take a wicket every ball and we keep telling him you can’t do that, you have to set the batsman up.

“He stuck to his lengths and lines very well today, the best he’s done for some time.”

Australia batsman Marnus Labuschagne, speaking to TMS:“We came here today looking for a really solid batting performance and obviously we didn’t do that but we’re still in the contest.

“The intensity definitely has not dropped. It’s hard to say that when our play on the field maybe reflect that. But we came to win the Ashes and we really want to do that.

“We don’t want to just retain the Ashe s. We have to come out tomorrow 100% on it and ready to take any chance. “ 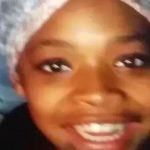 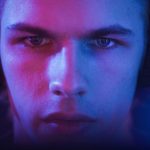