Aurora Cannabis Inc.’s U.S.-listed shares slid 8% Monday, after the company announced the exit of a key executive, amid insiders selling stakes, dilutive financing moves and questions about the company’s path to profitability.

The Canadian company, which is the most widely held stock

Canadian companies were planning to use CBD acquisitions to access the much bigger U.S. market

Cannabis stocks were slammed anew on Tuesday, after the U.S. Food and Drug Administration issued new guidance on CBD that included a stark warning that it can cause liver injury and other damage to the human body.

The warning is the latest blow to the embattled sector where many companies have developed strategies and plans for the cannabis ingredient, which was viewed by Canadian licensed players as a potential pathway into the much bigger U.S. market.

The move comes after a period of heavy selling across the cannabis sector amid disappointment at the slow rollout of legalization in Canada and the U.S. Both markets are competing with a still powerful black market and companies are struggling to grow revenue and reach profitability. Many are now cutting back, canceling previously agreed deals and conserving cash, while analysts have scaled back estimates and revised models.

The FDA said late Monday it is cracking down on 15 privately held companies for illegally selling products containing CBD. Since the passage of last year’s farm bill, CBD, a cannabis compound that is viewed as non-intoxicating, has existed in a sort of regulatory limbo. Because the FDA has approved a drug that contains the ingredient – GW Pharmaceutical’s GWPH, +1.11%  Epidiolex, a treatment for severe forms of childhood epilepsy – it told companies that they could not add it to food or drink or make health claims for its use in topicals.

The regulator said it would work to create a framework to allow companies that were hoping to launch CBD-based products bring those to market, but cautioned that given its status as a drug, it might require clinical trials.

Read more: ‘CBD has the potential to harm you,’ FDA warns consumers

On Monday, it used its strongest language yet on the substance.

“CBD has the potential to harm you, and harm can happen even before you become aware of it,” it said in updated guidance. The lack of scientific evidence about CBD means the regulator cannot conclude that it is “generally recognized as safe among qualified experts for use in human and animal food.”

“The FDA continues to believe the drug approval process represents the best way to ensure that safe and effective new medicines, including any drugs derived from cannabis, are available to patients in need of appropriate medical therapy,” said the guidance. “The agency is committed to supporting the development of new drugs, including cannabis and cannabis-derived drugs, through the investigational new drug and drug approval process.

Rob DiPisa, co-chair of the Cannabis Law Group at law firm Cole Schotz, said the news is a big setback for cannabis companies on both sides of the border.

“A lot of those who saw the U.S. CBD market as a huge opportunity to be marketed and consumed by the masses must now fears that this is an indication it won’t be as widespread as once thought,” he said.

U.S.-listed stocks of the Canadian companies that have explored entry to the U.S. via a CBD acquisition or venture fell Tuesday. Cronos CRON, +1.42%  , CRON, +1.41%  which recently closed the $300 million acquisition of Lord Jones, was down 3%. Cronos declined a request for comment.

Tilray TLRY, +1.00%  , which paid C$419 million in cash and stock to acquire Manitoba Harvest in February with the aim of producing a line of hemp and CBD-based foods and drinks, was down 2%. Canopy Growth, which has invested in hemp assets in New York state with the intention of creating CBD products, was down 2%.

Tilray said it welcomed the FDA’s latest guidance. “We believe more data and research is needed to inform this guidance and regulation accurately,” spokeswoman Kristina Adamski said. “Ultimately, a regulated and legal market is the safest for consumers and in the best interest of the nascent cannabis and hemp industry.”

“While U.S. CBD revenue is small or non-existent for most the companies, these acquisitions and strategic visions were/are the stepping stones to building a U.S. infrastructure ahead of better cannabis permissibility,” MKM analyst Bill Kirk wrote Tuesday. “We expect the companies to downplay CBD food/beverage importance to their strategies, while also legally challenging the FDA’s evolving stance. “

Will Investors Turn to Cannabis for a Spark? 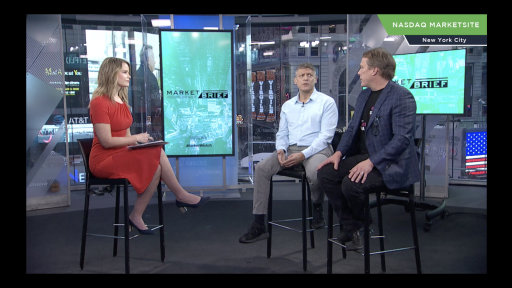 Will Investors Turn to Cannabis for a Spark?

“We’ve argued for a while that some near-term industry estimates for CBD are too high given the unclear regulatory outlook & this will likely be a catalyst for re-basing,” Jefferies analyst Owen Bennett wrote in a note. “Longer term, we see significant potential but do not expect material contribution to coverage names from U.S. CBD in the next 12 months.”

In other news, Green Organic Dutchman shares TGOD, -1.47% TGOD, -1.47%  slid 19%, after it announced that it has raised C$22 million in a bought deal carried out by a syndicate led by Canaccord Genuity. Proceeds of the deal, which it describes as “less dilutive than the previously announced convertible note term sheet,” will be used to fund construction of a processing facility.

Cresco Labs stock CL, +0.93% CRLBF, +0.42%  fell 2% after the Chicago-based company became the latest to terminate a deal, this time the acquisition of VidaCann Ltd. announced in March that would have cost it $120 million.

Cresco Labs said the decision was made to conserve cash as it works to accelerate top and bottom-line growth. The company has also signed an agreement for a sale-and-leaseback of two properties in Ohio and Michigan that will allow it to raise $38 million in non-dilutive financing.

“The team and operations at VidaCann are phenomenal, but with a focus on managing our cost of capital, and insuring the most efficient and highest return on invested capital, the ability to deploy resources to other, existing, Cresco markets that are widely considered some of the top markets in the U.S., like Illinois, Pennsylvania, California and Nevada, has to take priority,” Chief Executive and co-Founder Charlie Bachtell said in a statement.

Joining a growing number of weed companies laying off staff — including Hexo Corp. HEXO, +2.62%  , HEXO, +2.39%  CannTrust Holdings Inc. CTST, +0.24%  , TRST, +0.93%  Emerald Health Therapeutics Inc., among others — Harvest One Cannabis Inc. HRVOF, +5.48%  reported Tuesday before the opening bell that it was laying off 20% of its staff. In a statement, Harvest One CEO Grant Froese said that the company has been impacted by “provincial and regulatory challenges,” specifically pointing to the slow rollout of retail locations in Ontario and British Columbia.