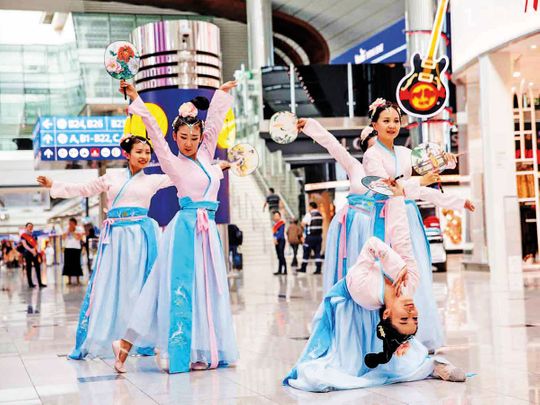 Dubai: If you are still looking for more fun, here is another chance to celerbate New Year in Dubai. Yes, the fun-filled Chinese New Year celebrations have kicked off in Dubai on Thursday.

For the third year running, Hala China, by Meraas and Dubai Holding, will usher in the Chinese New Year with a bang. And this year is set to be bigger and better than ever before, as a rich variety of cultural performances and experiences will take place across the city’s leading destinations from January 16 through to February 8, 2020.

City Walk, Al Seef, Caesars Palace Bluewaters Dubai, Dubai Parks and Resorts, Nikki Beach and Kite Beach will host a packed schedule of activities. These will range from a spectacular Grand Parade to Lion Dance competitions, as the emirate continues to embrace and celebrate the best of Chinese culture along with the over 200,000 Chinese expatriates who call Dubai home. Last year’s Grand Parade at City Walk drew the participation of more than 34,000 visitors to the urban destination, and those numbers are expected to reach up to 50,000 this year.

Sheikh Majid Al Mualla, Chairman of the Board of Directors at Hala China, said: “Riding on the huge success of the 2018 and 2019 Chinese New Year celebrations we hosted, the event has quickly become a highlight in Dubai’s calendar that many of our residents and visitors look forward to.

“This year, Hala China is offering its greatest array of Chinese-inspired events and activities, as we continue to raise the standards of entertainment in the region. The range of events we are set to host will show why more and more Chinese expatriates call our city with its state-of-the-art infrastructure and inclusive nature their home.”

Li Xuhang, Consul General of the People’s Republic of China in Dubai, said: “We’re lucky to witness the best time ever in the history of bilateral relations between the UAE and China. The celebration during China Spring Festival will definitely provide special opportunities for everyone who is ready to learn about Chinese culture and history, thus bringing greater cultural awareness and social integration to the residents of the two countries.”

With such a range of Chinese New Year-inspired events set to unfold across Dubai, here’s what to look out for, as the year of the rat dawns.

On 17 January 2020 from 4pm, City Walk by Meraas will host the spectacular Grand Parade, featuring enormous dragons, acrobatic performers and much more. Over 40 groups, including schools, Chinese expatriates, resident Chinese business chambers, as well as a marching band from the emirate’s own Dubai Police will join hands with performers from China at the Grand Parade. Visitors can expect to see a symphony orchestra, dragon and lion dances, acrobatics and Kung Fu, among other displays. Over 4,000 participants will make up the biggest Chinese New Year parade in Dubai.

For the first time, on 18 January 2020 from 2pm to 7pm, Dubai Parks and Resorts will host over 30 teams from China competing for the title of the ‘Lion King’. The lion dance, a traditional dance performed during Chinese New Year and other Chinese cultural festivals, is said to bring good luck and fortune to those who practice and watch it. Performances mimic a lion’s movements.

From 16 January to 8 February 2020, City Walk will host a pop-up exhibition to showcase Chinese New Year themed arts and crafts, music performances from Beijing, Suzhou and Chengdu, as well as interactive performances and include surprise giveaways.

On 18 January 2020, from 8:30am to 1:00pm, Kite Beach, the city’s favourite beach spot for friends, families and fitness fanatics will host a day-long kite festival. Open to all, the local community can participate in kite making and traditional kite-flying activities. Little ones can stay entertained with kite-making workshops where they can learn all about the art of flying kites.

One of the highlights of the festivities will be the multifaceted food festival. On 19 January 2020, Hala China is set to run a cooking competition that will see top master chefs from China and revered UAE-based chefs go head-to-head at Nikki Beach in front of a live audience, with the executive chef from Dubai’s Nikki Beach and Silk Flavour Restaurant’s Wu Zhihong judging the outcome of the cook-off. The exchange will bring the best of both cuisines to life.

Performing for the first time in the emirate, China’s famous TikTok influencer with over 1.5 billion views, Feng Jia Chen will put on a unique performance, rotating on a giant sphere, gracefully and seemingly effortlessly defying gravity all the while dressed as a Tang dynasty princess. Her performances are set to take place from 27 to 29 January 2020 at Dubai Parks and Resorts from 5pm to 8pm on the hour. Each show is for a 20-minute duration and is open to all.

Hala China, an endeavour by Meraas and Dubai Holding, focuses on exploring opportunities that facilitate economic development through tourism, trade and investment. The programme features a robust calendar of events, including food festivals, fashion shows, sporting competitions, as well as music and cultural festivals. In December 2019, Hala China wrapped up its second edition of Dubai Fashion Days, which saw over 12 designers from China and the Middle East put together a five-day fashion extravaganza under the able guidance of show director, Jerry Zhang China’s ‘father of fashion’.

The post Be ready for mega Chinese New Year celebrations with fun-filled activities across Dubai appeared first on The Wealth Land.

Previous Crypto device market to boom by 7,700% in the next decade
Next Six dead, 19 injured in Abu Dhabi road accident