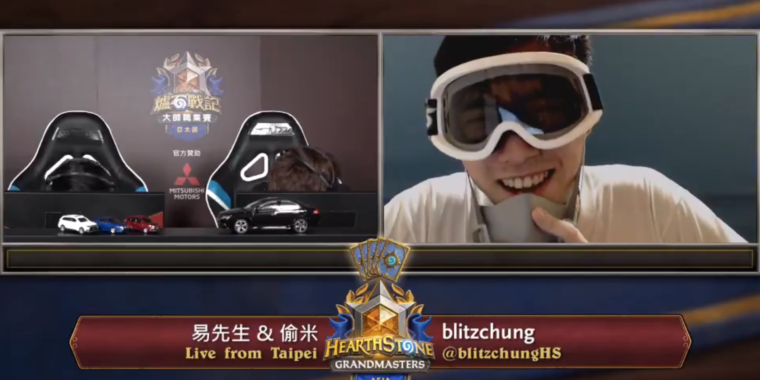 Blizzard President J. Allen Bracksaid in an interview with PC Gamer this weekendthat the company will not be reversinga six-month suspensionfor Ng “Blitzchung” Wai Chung and twoHearthstonecasters that were involved inHong Kong-related protests on a live esports stream last month.

In explaining that decision, Brack reiterated the message that Blizzard supports free speech and encourages employees and players to say what they want in “all kinds of ways and all kinds of places.” The one exception to that, he said, is “official broadcasts,” including Blizzard-sponsored esports events, which the company wants to be “focused on the games.”

“Again, it’s not about the content of Blitzchung’s message,” Brack said, echoingprevious commentsfrom Blizzard . “It’s about the fact that it was not around the games. If we hadn’t taken action, if we hadn’t done something, you can imagine the trail that would be in our future around doing interviews. They would become times for people to make a statement about whatever they wanted to, on whatever issue. That’s just a path that we don’t want to go down. We really want the content of those official broadcasts to be focused on the games, and keep that focus. “

Brack added that Blizzard employees, including “esports athletes, our Grandmasters, or anyone who is participating in esports [are] free to say and do whatever they want on their social channels.” That seems to directly contradict the reported experience of Justin “Jayne” Conroy, assistant coach for the Dallas Fuel pro (Overwatch) ********************************** (team, who) told the Dallas Morning News last monththat Blizzard asked him to remove a tweet criticizing the Blitzchung decision.

Brack’s interview comes after he issued avague apologyfrom the Blizzcon stage Friday, in which he accepted “accountability” for the Blitzchung decision and said the company would “do better” in the future. The decision to keep the suspension in place comes despite pressure fromBlizzcon protesters,proHearthstoneplayers, (Blizzard employees) ,Twitter hashtaggers, anda bipartisan group of US legislators.

Brack also reiterated in the interview that Chinese regulations and business pressure has nothing to do with the company’s decisions regarding Blitzchung. ThoughHearthstoneis available in China, Brack stressed that it was only through local publishing partner NetEase, and that Blizzard itself is “not legally allowed to operate or to publish games in China. “

Brack also said NetEase was to blame for aWeibo post from Blizzard Chinashortly after Blitzchung’s on-stream protest, which suggested the company would “always respect and defend the pride of [China].” Brack said directly that Blizzard “did not authorize [the post]. we would not have approved it had they asked. “

Elsewhere in the interview, though, Brack says that Blizzard Taiwan,Hearthstoneleadership, and Blizzard’s “esports team” were all “in conversation [with NetEase] around the issue.” Together, Brack said, those groups “acted very rapidly and we acted very quickly” in handing out Blitzchung’s initial ban, using an amount of haste that Brack now calls “the failure of this story.”