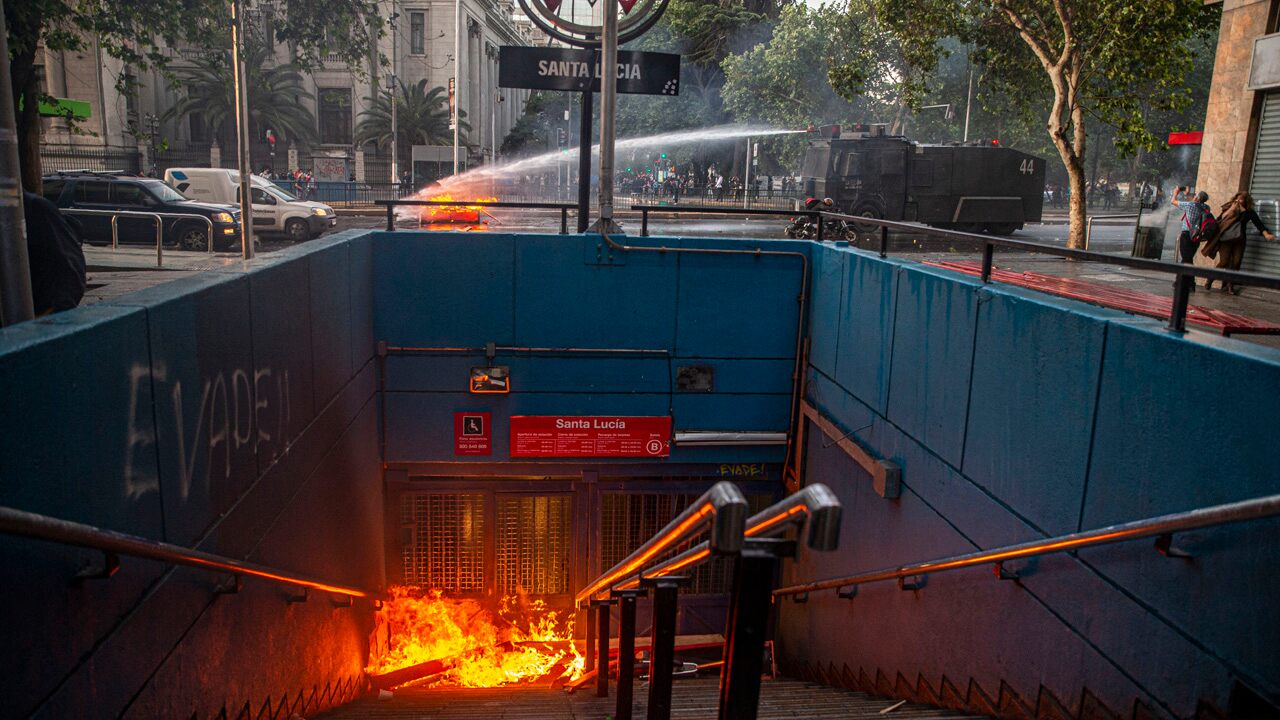 Three people were killed after a supermarket inChile’s capitalwas looted andburnedSaturday amid riots that stretched for a second day, triggering the country president to declare astate of emergencyand suspend a planned subway fare hike that prompted theviolentoutbreaks.

The Chilean Army declared a curfew inSantiagobetween 10 pm on Saturday and 7 a.m. on Sunday in an effort to stem the violent unrest that has overtaken the city this week, causing subway service to be suspended since Friday.

Santiago Mayor Karla Rubilar said late Saturday at a news conference that three people died in a fire at a supermarket that was set by demonstrators, including two who burned to death inside.

A police water cannon extinguishes a burning bus that was set alight by demonstrators during a protest in Santiago, Chile, Saturday, Oct. 19, 2019.       (AP Photo / Esteban Felix)

“We regret to inform that, according to preliminary information from Chilean police, two people were found fatally burned in San Bernardo and a seriously injured person was moved to hospital where they died, “she saidonTwitter.

Chilean President Sebastián Piñera said late Saturday he was revisiting the subway fare hike from the equivalent $ 1. 12 to $ 1. 16 that prompted the violent student protests. At least 78 subway stations in the capital have been damaged, including infrastructure and equipment.

A police water cannon puts out a burning barricade near the Santa Lucia subway station during a protest against the rising cost of subway and bus fares, in Santiago, Friday, Oct. 18, 2019.       (AP Photo / Esteban Felix)

“I have heard with humility the voice of my compatriots,” Piñera said before announcing that “we are going to suspend” the fare hike.

The protest by students began on Monday when hundreds of young people mobbed several metro stations in Santiago, jumping over or dipping under turnstiles in a fare-dodging protest against the 4 percent increase in fares.

The protests against the subway fare hike have since escalated into rampant violence, with thousands of students burning subway stations and damaging dozens of others, and some protesters setting fire to a high-rise energy company building on Friday. Officials reported 156 police officers and 11 civilians injured and more than 300 people arrested.

Firefighters work to put out the flames rising from the Enel Energy Europe building set on fire by protesters against the rising cost of subway and bus fares, in Santiago, Friday, Oct. 18, 2019.       (AP Photo / Esteban Felix)

The unrest has spread to other cities across the country, including the port city of Valparaiso where the government declared military rule late Saturday,according to Reuters. Walmart said in a statement that 60 of its stores in Santiago and six other cities suffered looting.

“We invite all citizens to return to their homes and to evaluate the measures that the government has arranged and cooperate, to protect their family, their integrity and their own assets, ”said General Javier Iturriaga del Campo, the military officer put in charge of establishing order in Santiago.

The decision to deploy the military to city streets shocked many in Chile, which was under a military dictatorship until 1990. The military is expected to help police patrol city streets during a 15 – day state of emergency that allowed authorities to restrict assembly and movement,the BBC reported.

Despite the presence of soldiers and police, thousands of Chileans continued protesting, including in cities outside Santiago, not only against public transit fare hikes, but the price of electricity, water and medicines.

Firefighters put out the flames on a burning bus during a protest against the rising cost of subway and bus fares, in Santiago, Friday, Oct. 18, 2019.       (AP Photo / Esteban Felix)

Chile doesn’t produce its own oil and must import its fuel, leading to high prices for gasoline, electricity and elevated public transportation costs, according to the Associated Press. The government said the fare increase was necessary because of rising energy costs, the devaluation of the country currency and maintenance. But many Chileans are frustrated by rising prices.

Firefighters put out the flames on a burning bus during a protest against the rising cost of subway and bus fares, in Santiago, Friday, Oct. 18, 2019.       (AP Photo / Esteban Felix)

At the San José de La Estrella metro station, mechanical engineer Hugo Millacoy González, accompanied by his young son, told the AP he was protesting the hike “so my son sees that they can’t mock the people.”

If subway service is still suspended Monday, when many Santiago residents return to work and school, it would create further commuter chaos.

Santiago Metro Director Louis De Granges said “there is still no clarity” on when subway service would return to normal. 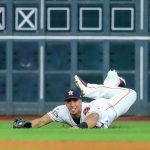