What are the languages ​​used in BR?

The languages ​​spoken are English, Chinese, German, Japanese and “Cityspeak”.

Cityspeak is a mixture of words and expressions from Spanish, French,               Chinese, German, Hungarian and Japanese. The “conversation”               between Deckard and Gaff in the beginning of BR is an example of

Translation of the noodle bar scene dialogue (with comments):

(Provided by and with introduction by Netrunner) 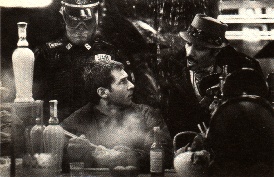 Sushi Master:{To                  a customer}Nan ni shimasho ka.[Japanese: “What’ll it be?” Note: “Nan” is colloquial shortening of “Nani”, so the translation given is less formal than the “What would you like to have?” it would be otherwise. Thanks to Gary for that distinction.]

>
Blimp:This announcement has been brought               to you by the Shimago-Dominguez Corporation. Helping America into
>

Sushi Master:{To                  Deckard}akimashita, akimashita! Irasshai, irasshai![Japanese: “(The seat’s) free, (it’s) free!” Welcome, welcome!” Note: Akimashita is the past tense of “aku” – to become free”. Although it sounds like “kimashita” this is in fact the past tense of “come”, i.e. “came”, and “Came, came!” is thus an unlikely translation. The Sushi Master gestures to the empty seat and effectively says, “The seat’s opened up!  There’s a seat for you here!” – Thanks to Gary for the information.]

{Deckard goes over to Sushi Bar.}

Sushi Master:Wakatte kudasai yo.               [Japanese: “Please understand!” (Actually implying (mildly) sarcastically, “Can’t you understand?”) He knows Deckard by name, so this is probably a familiar jibing between the two.]

Gaff:              Monsieur, azonnal kövessen engem bitte.[French-Hungarian-German: “Sir, follow me immediately please!” (Thanks to eMU for translating the Hungarian part:- “azonnal” – means immediately; “kövessen” – means follow imperative; “engem” – means me. And of course “Monsieur” is French for Sir and “bitte” is German for please.)]

Deckard:You got the wrong guy , pal.

Gaff:Captain Bryant toka. Me ni               omae yo.[“Japanese”: “Captain Bryant wants to see your mug in front of his immediately!” (This is a very loose translation and is definitely Cityspeak rather than straight Japanese.) Note: The first part could actually be a strangulation of“Captain Burayanto ga”– grammatically meaning Captain Bryant is the subject of the sentence. “Me ni omae yo” may be a sort of pun. “Me ni mae” means to meet someone. “omae” is the very informal use of “you” – in Japanese, this is significant. “yo” – Exclamation – Japanese doesn’t use the ‘!’ punctuation. Thanks to Michael J. Simon for helping out with this line. However, note that this is an attempt at translation and as it stands is not standard Japanese. (Could this actually contain some other Oriental language?) Thanks to Gary for the additional info.] 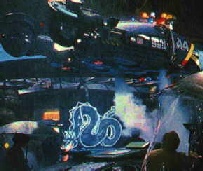 {Deckard and Gaff leave in spinner.}

What is the language used by the midgets that are ripping stuff               off Deckard’s car? What are they saying?

They are speaking German.

Here is the complete dialogue of that scene: