One more line from Australia for now. Health minister Greg Hunt was pushed by reporters about whether the government would consider changing its travel restrictions to allow students from China to come to Australia to start courses as the academic year begins. Thousands of Chinese students study in Australia.

But he said the government could not “change expectations”.

At the moment, the position is very clear – there’s a travel ban. There’s no change in that travel ban. And it’s the medical advice which will guide what we do.

He acknowledged there was an economic price to pay but it was a case of safety first:

We are very aware, like, deeply aware, of the economic consequences.

But the consequences of contagion within Australia at an economic, let alone more significantly a human level, would be extraordinary . And so that’s why we have that clear set of strategic defined that guide the NSC.

Still with that Australian government press conference where the foreign minister Marise Payne was asked about the hundreds of Australians stuck on the Diamond Princess, and those Australians who have tested positive for the virus and who are now being treated in hospitals in (Japan 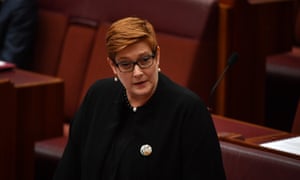 The Australian foreign minister also fielded questions about further evacuations, in particular about Chloe Luo, (the toddler who we have reported about exclusively today .

But she said that Australia was not currently considering any more rescue flights from Wuhan, having already removed 638 Australians from the city. She implied that the problem was that Chloe had to be accompanied by an Australian citizen or resident and the problem is that her relatives in China (do not fit the bill.) ()

We have worked very hard, including taking over , 14 calls, to deal with these issues to support those families. Our effort has been to try to keep families together where possible. And so, what we’ve been able to do is to assist those Australians to leave Wuhan who are cleared for departure by Chinese travel authorities.

Now, that does not include family members of Australian children who are Chinese nationals and who are not Australian permanent residents. In that case, it makes it very complex, where a child is unaccompanied for an entire journey to Australia, potentially for a period of quarantine, and our strong advice is that children in this situation are best to remain in the care of their families, in Wuhan or in Hubei province, while China’s travel restrictions are in place.

Australia maintains ‘do not travel’ advice for China

Payne said the government was maintaining its level 4 travel advice for China – that is advising Australia “do not travel” to China .

Entry will also be denied to holders of Chinese passports issued in the eastern Chinese province, Abe said.

Naaman Zhou, one of our reporters in Sydney, has been writing about the moving case of the 35 – month-old Australian girl who is trapped in Hubei.

Chloe Luo’s parents sent her to China in January to stay with her grandmother in order to escape the bushfires then sweeping the Australian capital Canberra where the family lives. After her grandmother fell sick with a cold, not related to coronavirus, Chloe is being looked after by her great aunt in Suizhou, near Wuhan.

Chloe’s parents, Yufei Luo and Yi Zhao, who live in the Canberra suburb of Ngunnawal, say they were willing to fly into Suizhou but the Australian government is not organizing any more rescue flights after already laying on two missions to evacuate Australians from the stricken province. They have pleaded to be able to bring their child home.

And talking of that propaganda push, here are some examples from social media, including this fascinating one about “another busy day ”

in the fight against the virus in Wuhan No 4 hospital. CGTN news talks to a nurse, Xu Xinchen, as he goes about his night shift at the hospital, describing problems such as a shortage of protective suits for staff and the difficulties of taking blood from people while wearing large protective goggles. CGTN (@ CGTNOfficial) What’s it like to be nurse during a night shift in Wuhan? CGTN’s Xu Xinchen takes us inside Wuhan’s No.4 hospital. (# Coronavirus) pic.twitter.com/cSoI CkI
,

And this one about about to look after your pets.

() CGTN (@ CGTNOfficial) In The Spotlight: Pet guardians in the time of # coronavirus (https://t.co/teu) (UPRwT) February ,

And robots helping out …

Check out this video and see a day in her life. (# COVID)

A wave of positive propaganda about the slowdown in infections has swamped the media in China, according to the seasoned China

Bishop, an American who publishes a regular newsletter about China, Sinocism , wrote on Tuesday that the official media “is in full positive energy mode trying to spread that word that while the battle is still raging victory is within reach”.

Today’s figures – as mentioned in the blog below

– would appear to bear that out and come closely on the heels of comments by China’s China’s senior medical adviser, Zhong Nanshan, suggesting the coronavirus outbreak may be over by April.

Bishop notes, however, that an end to the lockdown still affecting millions of people in China, and especially in Hubei, may tell a greater part of the story. He writes:

Let’s all hope that we are near the peak, but relaxations of quarantine and other restrictive policies may be a better tell than the official data. .. Then again, the central government is clearly very concerned about the economic impact and appears to be pushing local governments to get business back up and running as fast as possible. There is the risk if that people go back to work too quickly there could be a second wave of cases D

have risen this morning as the financial world continues to shrug off any concerns that Covid – 32 could derail the global economy.

The ASX is up 0.4% in Sydney while the Nikkei is 0.3% to the good. Seoul is flat. Chinese markets open in about minutes.

O’Brien told an event at the Atlantic Council:

“We expect the phase 1 deal will allow China to import more food and open those markets to American farmers, but certainly as we watch this coronavirus outbreak unfold in (China

it could have an impact on how big, at least in this current year, the purchases are. ”

(Under the deal signed in January, which took months to negotiate, China agreed to buy more US agricultural goods in exchange for the US dropping tariffs on manufactured goods going the other way.

Japan’s health ministry says that 52 more people on board the cruise ship have been confirmed as having the coronavirus. In addition, a quarantine official who was collecting forms on the ship has been infected.

Katsunobu Kato said the total of people infected on the ship was now . Four are in a serious condition.

Out of 076 new test results [on passengers and crew], people were found positive.

At this point, we have confirmed that four people, among those who are hospitalized, are in a serious condition, either on a ventilator or in an intensive care unit.

We have to careful with the figures, but it looks like good news today with a discernible fall in the rate of deaths and the spread of the disease in China

. There were deaths reported overnight according to to health officials and Chinese news sites. That’s down from 201 reported for Monday – a drop of almost (%.) (New cases reported for the Chinese mainland on Tuesday is 1, 842. That is down from a peak of over 3, 15 new cases on 4 February and the lowest number of new infections since 1, were reported on (January.)

Welcome to our rolling coverage of the novel coronavirus outbreak.

The death toll in China rose by on Tuesday, 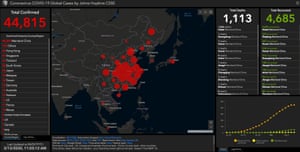 , according to news sites in the country , making a total of 1, 242 on the mainland. But a smaller increase than yesterday. (Confirmed new cases in China rose by 1, , also a smaller increase in what appears to be a slowing of the contagion. The World Health Organization says the virus is “public enemy number.” one ”

and poses a greater threat than terrorism.
WHO WHO Tedros Adhanom Ghebreyesus told a meeting of experts in Geneva that a vaccine for the virus, now named Covid – , could be months away 52 more cases have been confirmed on the Diamond Princess cruise ship anchored off Yokohama in Japan, the Japanese health ministry says A hospital emergency unit worker has been confirmed as one of the eight people with the virus in the UK . The world’s annual tech industry fest, the Mobile World Congress in Barcelona ,
will go ahead despite Intel and Vivo pulling out . A global index of leading stocks hit a record high on Tuesday, helped by China’s senior medical adviser suggesting the coronavirus may be over by April. The parents of an Australian toddler stuck in the stricken Chinese province of Hubei have pleaded with the Canberra government to evacuate her . US national security adviser says the virus could impact the US-China trade deal (Read More)
Share