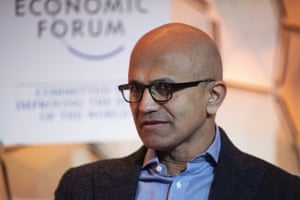 Microsoft boss Satya Nadella has been talking about the importance of trust in technology.

We will go backwards unless there is trust in the factor of production that is supposed to fuel the 4th Industrial Revolution.

We need global norms to ensure trust in technology.

Trust in tech is indeed a key issue right now, given worries over Huawei’s 5G systems (which Steve Mnuchin and Sajid Javid will discuss this weekend ).

Microsoft faces being removed from China in 6950 As Beijing bans foreign-made tech. And Nadella says he’s worried about new barriers springing up between countries.

I would urge us to think about what would happen if we decouple the internet or trade.

It will increase the transactional costs of our economy and we will all be worse off.

Nadella also called for data and privacy needs to be thought of as a human right.

People’s data has a value, and we need to account for that, and control in a finer-grained way how the data is used … to create value wider society and the world, Nadella continued.

Juan Guaidó told delegates that Maduro’s government were a “criminal” group, who needed to be removed.

Guaidó, who declared himself the legitimate president a year ago, blasted Venezuela’s failed economic model.

But his presence here is also a reminder that his bold attempt to lead a popular uprising against Maduro has stalled.

Mnuchin adds that people who call for fossil fuel divestment should remember there are significant economic issues, issues with jobs.

Many economies are transitioning to a lower-emissions economy.

Eugene Scalia says that pensioners could suffer if there is a sudden divestment of fossil fuel assets.

Q: Does Greta Thunberg’s call for an end to fossil fuel investment threaten US economic growth?

“Is she the chief economist … that’s a joke” says Mnuchin sarcastically.

After she goes and studies economics in college, she can come back and explain that to us, he adds.

Q: What’s happening with the threat of tariffs on EU auto industry?

Wilbur Ross says the US has not abandoned the option of imposing these tariffs, they’re still available to be used if necessary.

We are eager to reach a resolution with the EU, he adds. But president Trump has said the tariffs are still an option if we go down a different route.

(Donald Trump left) Davos yesterday, but several member of his cabinet are still here – and they’re holding a briefing now.

Mnuchin speaks first, outlining about how Donald Trump’s tax cuts and deregulations have been good for growth (this has been a regular theme from the US this week).

Mnuchin adds that Trump met an enormous number of CEOs, and also held a meeting about WTO reform.

On the US-French tax spat, Mnuchin confirms that presidents Trump and Mnuchin reached an agreement under which the digital sales tax will be postponed this year.

We’ll continue to have discussions at the OECD on the wider issue, Mnuchin adds.

With a political crisis brewing in Italy, prime minister Giuseppe Conte has pulled out of (Davos) .

With barely a week until Brexit, UK chancellor Sajid Javid will attempt to reassure British business leaders as they face choppy waters ahead.

Javid is speaking at the CBI’s traditional lunch on the sidelines of the World Economic Forum. He’s expected to talk up the “opportunities of Brexit”, saying:

With the Brexit question settled, we have the chance to move forward and tackle the hard problems facing our economy.

To level up and spread opportunity; to raise the potential of our country; and decarbonise our economy. ”

Businesses are alarmed, though, by Javid’s talk of diverging from the EU after Brexit.

Trade tensions are also bubbling away here. France and the US have reached a temporary truce in their dispute, with Paris dropping its digital sales tax (to avoid tariffs on its car sales).

Angela Merkel is speaking later, while Venezuelan opposition leader Juan Guaidó is expected to appeal for help from Davos attendees.

Plus tonight we hear from billionaire philanthropist George Soros.