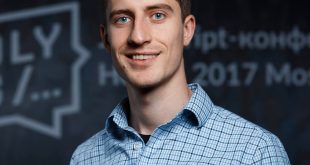 In this blog post we’ll go through a sample implementation of a type checker, interpreter and a transpiler for a basic purely functional programming language, which is based on thelambda calculus. We will do a “full-stack” programming language development by going through formal definition of the language’s syntax, semantics and type system. After that we’ll demonstrate how we can “translate” these definitions to JavaScript.

Although the article doesn’t require any mathematical background, it’ll be useful to have high-level understanding of how compilers work. The article is inspired by the book “Types and Programming Languages ​​”.

The source code of the implementation can be found at myGitHub profile.

The syntax of the language is going to be quite simple.

Our programs will belong to the language defined by the following grammar:

→and. In case you have a Greek keyboard layoutλwill be easy to type, however, in order to quickly type→You will need some kind of a keyboard shortcut. In other words, the syntax of our language is not very ergonomic.

andpredproduce natural numbers. In order to be consistent with the grammar the result ofpred 0will be(0) . **********

Regarding the type system, we will have two primitive types:

Now after we’re familiar with the syntax, we can try to write some code. In the textarea below enter your program and click on the button “Evaluate” to see the result:

Before going any further, lets show a few sample programs belonging to the programming language that we’re going to develop.