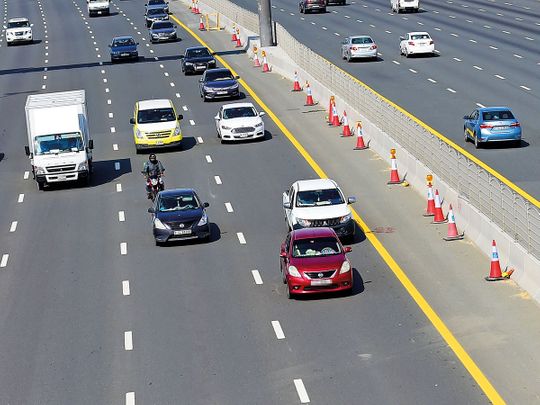 Abu Dhabi: The same radars used to catch tailgaters will also detect and fine offenders for driving too slow in the fast lane, Abu Dhabi Police have said. A video posted on the Abu Dhabi Police instagram page on Wednesday, said, “A Dh400 fine will be imposed for failure to give priority to vehicles coming from the back or left-hand side.”

Police reiterated that the right lanes were for slower vehicles while the left were for fast and overtaking.

A new smart system launched on January 15 penalises drivers for not leaving enough distance between vehicles by sending warning text messages to the offender followed by Dh400 fines and four black points. But this system can also catch slow drivers confirmed police.

“Drivers should ideally stay at least two seconds behind a vehicle that is directly in front of his or her vehicle. This is very useful and can be applied to any speed,” he said.

Abu Dhabi Police is carrying out a traffic awareness and control campaign to reduce such offences, as section 52 of the traffic control rules and procedures No.178 for 2017 will be applied to drivers who don’t leave enough space between them and the car in front.

The post Dh400 fine for driving slow in the fast lane in Abu Dhabi appeared first on The Wealth Land.