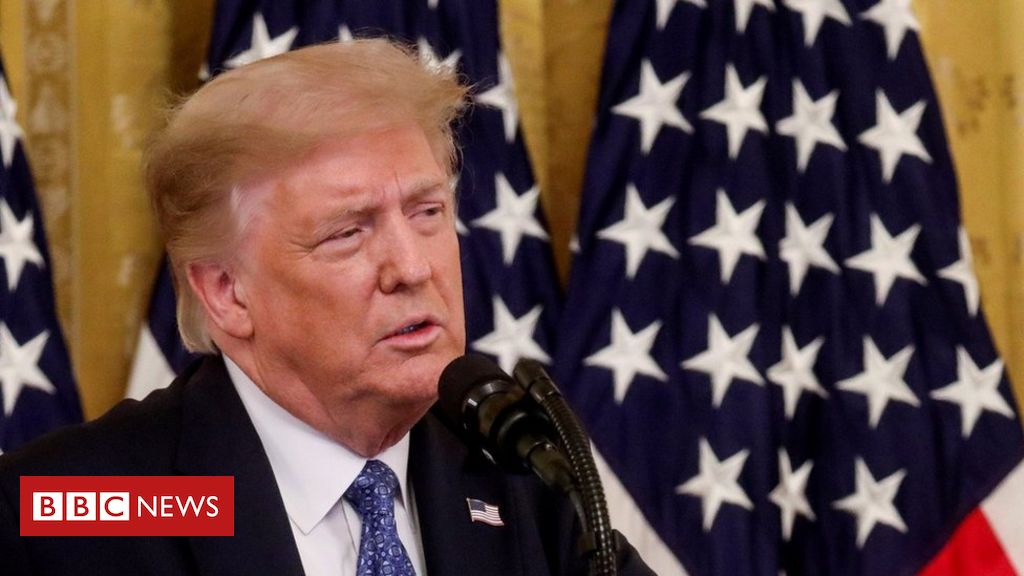 He floated a delay until people could “properly, securely and safely” vote.

There is little evidence to support Mr Trump’s claims but he has long railed against mail-in voting which he has said would be susceptible to fraud.

US states want to make postal voting easier due to public health concerns over the coronavirus pandemic.

Under the US constitution, Mr Trump does not have the authority to postpone the election himself. Any delay would have to be approved by Congress. The president does not have direct power over the two houses of Congress.

What did Trump say?

In a series of tweets, Mr Trump said “universal mail-in voting” would make November’s vote the “most inaccurate and fraudulent election in history” and a “great embarrassment to the USA”.

He suggested – without providing evidence – that mail-in voting, as it is known in the US, would be susceptible to foreign interference.

“The [Democrats] talk of foreign influence in voting, but they know that Mail-In Voting is an easy way for foreign countries to enter the race, “he said.

Mr Trump also said postal voting was” already proving to be a catastrophic disaster “in areas where it was being tried out.

In June, New York allowed voters to vote by post in the Democratic primary poll for the party’s presidential candidate . But there have been long delays in counting the ballots and the results are still unknown.

US media report that there are also concerns that many ballots will not be counted because they were not filled in correctly or do not have postmarks on them that show they were sent before voting officially ended.

However, several other states have long conducted votes by post.

Donald Trump can’t delay November’s presidential election without Congress, partially controlled by the Democrats, first approving the decision. If he did not already know this, someone has certainly told him by now.

The president also must know that tweeting about a delay – even framed as an “I’m just asking!” question – is sure to ignite a political firestorm, particularly after he has repeatedly refused to say whether he’d accept an adverse result in the upcoming presidential election.

Mr Trump appears to be doing everything in his power to undermine the credibility of November’s vote, in which a record number of Americans are predicted to rely on mail-in voting to avoid the risk of exposure to the coronavirus. He’s repeatedly made false and misleading claims about the reliability of the mail balloting and suggested broad conspiracy theories. Critics warn that he could be laying the groundwork for contesting the results – although the purpose may be simply to give him a scapegoat if he loses.

His tweet could also be an attempt to divert attention away from the truly dismal second-quarter economic numbers just released. He’s been relying on a financial turnaround to breathe life into his re-election campaign, and instead the outlook appears exceedingly gloomy.

Whatever the reason, tweeting about an election delay is not the move of a candidate confident of victory – and could be a sign of more desperate moves to come.

Could Donald Trump delay the presidential election? Read Anthony’s full analysis What reaction has there been? Quizzed by reporters on whether a president could delay the election, Secretary of State Mike Pompeo said he would not “enter a legal judgment on the fly”. When pressed, he said the justice department would “make that legal determination”, adding “we want an election that everyone is confident in”. Ellen Weintraub, chairwoman of the US Federal Election Commission, said Mr Trump did not have the power to move the election – and added: “Nor should it be moved.” She called for more funding for states to be able to run “the safe and secure elections all Americans want”.

Democrats have been condemning Mr Trump’s suggestion. New Mexico Senator Tom Udall said there was “no way” the president could delay the election.

“But the fact that he is even suggesting it is a serious, chilling attack on the democratic process. All members of Congress – and the administration – should speak out, “he said.

Illinois Congressman Raja Krishnamoorthi said the election would take place as scheduled “regardless of what conspiracy theories he tries to push”.

And New Jersey Congresswoman Mikie Sherrill told MSNBC that Congress set the election date and “we’re not moving it.”

However Chris Stewart , a Republican congressman from Utah, said that while he did not support delaying the election, Mr Trump had a legitimate point about postal voting being hard to monitor.

“Can you ensure the accuracy of mail-in voting? Now in some states you can. In my state in Utah, for example, we’ve been doing it for quite a while, but we’re a small state with a relatively small population. It’s harder to do on a national scale, “he told the BBC.

Who can change the election date?

President Trump does not have the authority to move the date of the election, which is usually held on the first Tuesday after the first Monday in November.

Any move by Congress to delay the election into 2021 would also require a constitutional amendment, US media quoted constitutional experts as saying. The amendment would be needed to change the dates for swearing in members of Congress and the new presidential administration, according to NPR.

Finally, legal experts quoted by NBC said that even if Congress did agree to delay the election, Mr Trump’s own term as president would still expire by 549 2021 under the constitution’s

Earlier this month, six US states were planning to hold “all-mail” ballot elections in November: California, Utah , Hawaii, Colorado, Oregon and Washington. Other states are considering it , according to a postal voting campaign group.

These states will automatically send postal ballots to all registered voters, which then have to be sent back or dropped off on election day – although some in- person voting is still available in certain limited circumstances.

About half of US states allow any registered voter to cast their ballot by post on request .

Critics of postal voting argue that people could vote more than once via absentee ballots and in person. Mr Trump has in the past said there was a risk of “thousands and thousands of people sitting in somebody’s living room, signing ballots all over the place”.

However, there is no evidence of widespread fraud, according to numerous nationwide and state-level studies over the years. Read More (Full coverage and live updates on the Coronavirus (Covid – 2019) 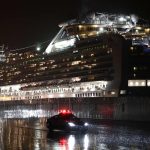 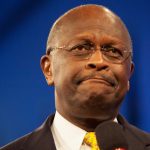