At least 27 people have died after a passenger plane crashed into houses in Goma city in eastern Democratic Republic of Congo, local officials say.

Residents on the ground, including nine family members, were among the victims.

The small aircraft went down in the Mapendo neighborhood after “missing” its take-off from the city’s airport on Sunday morning, North Kivu regional governor Nzanzu Kasivita said.

The officials say 17 passengers and two crew members were on board the plane.

Air accidents are relatively frequent in DR Congo amid lax safety standards and poor maintenance, and all the country commercial carriers are banned from operating in the European Union.

What is known about the air disaster?

The Dornier- 228 twin-turboprop aircraft – owned by private carrier Busy Bee – crashed about a minute after take -off, a source at Goma airport told the BBC.

The cause of the crash is still unclear, but some sources said the plane experienced engine failure right after take-off, the BBC’s Emery Makumeno reports from the capital, Kinshasa.

Rescue workers and local residents rushed to the crash site to evacuate the injured and also retrieve the bodies.

It was not immediately known how many residents were in their homes when the plane crashed.

Governor Kasivita confirmed the crash had “cost the lives of our fellow countrymen” and offered his condolences to the families of survivors. 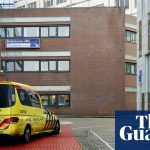