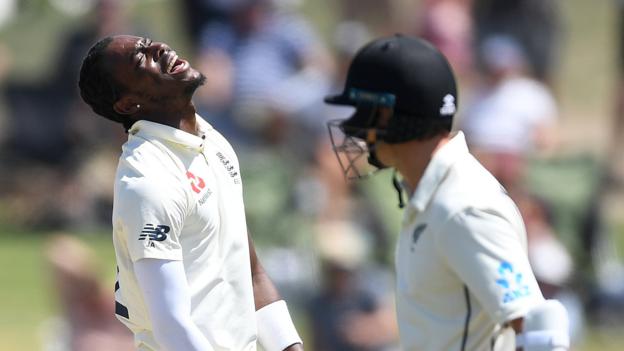 Joe Root dismissed Henry Nicholls lbw in the morning session but afterwards Watling and Colin de Grandhomme put on 119 in an excellent 39 – over stand.

De Grandhomme was brilliantly caught by Dom Sibley for 65 off Ben Stokes but Watling batted all day for 119 not out.

He was dropped on 31 by Stokes but batted patiently and in the evening session was supported by Mitchell Santner, who made 31 in an unbroken partnership of 78.

England began the day eyeing a sizeable first-innings lead but their lack of potency leaves New Zealand more likely to take a 1-0 lead in the two-match series, although the docile pitch at Mount Maunganui showed a surprising lack of deterioration.

England’s lack of threat with the ball was an all too familiar sight for Root’s side in Test matches overseas.

As they did in the 2017 – 18 Ashes series, England failed to create chances on a flat pitch with little movement in the air or off the pitch.

It was hoped Jofra Archer would bring extra thrust to England’s attack with his pace but on this occasion he was well below his best and remains wicketless – his speeds lower than he managed during this summer’s Ashes, one quick spell aside.

Root opted to begin the day with Stuart Broad and Sam Curran, rather than the Sussex fast bowler, and used the same pair with the second new ball, but neither struck as the pitch showed no further examples of the uneven bounce that saw Curran dismiss New Zealand captain Kane Williamson late on day two.

The second new ball brought no increase in threat and England soon turned to defensive fields in the afternoon session, while they also seemed to lack energy with a number of misfields and a second difficult drop by Rory Burns off De Grandhomme.

They bowled wide of off stump and failed to take a wicket in a session when bowling 20 overs or more for the 29 th time since 2017. Only Sri Lanka 32) have done so more often in that time.

De Grandhomme hit a long hop from Stokes to Sibley, who dived brilliantly low to his right to take the catch, on the first ball after tea but Root’s side failed to take advantage of that opening.

Number eight Santner was peppered with short balls early on but after uneasily battling through that period he made it to the close with relative ease.

Late on Watling was given out lbw to Archer but he successfully overturned the decision on review as replays showed an inside edge.

The day will feel more painful for England given the fact centurion Watling should have been dismissed when New Zealand were still 157 runs behind their first innings score.

Stokes put down a regulation catch at slip off Root but afterwards Watling batted beautifully for his eighth Test century.

He took his time and did not offer another chance, nudging the ball around the ground with some pleasing drives through extra cover.

The 34 – year-old took a backseat as De Grandhomme upped the scoring after lunch but, where England’s batsmen fell after making a start, he went on to make a century, batting just short of seven hours.

New Zealand will now look to bat England out o f the game on day four.

‘England’s hardest day for a while’ – reaction

BBC cricket correspondent Jonathan Agnew, on Test Match Special:“England will not look back on this day with any affection at all – that was their hardest day for a while.”

Former England batsman Mark Ramprakash:“It’s a placid, benign pitch but England got their tactics wrong – they overdid the short ball and put men back when New Zealand’s batsmen were not looking to hook or pull. “

New Zealand wicketkeeper BJ Watling:“It was very special, I love scoring runs for New Zealand and it was good to get us into a position of parity and hopefully we can take it forward.

“We have to eke out as many runs as possible because it’s going to be really tough batting on day five here. “

England head coach Chris Silverwood:“I wouldn’t say we are out of the game yet. They have a small lead. If we show the same attitude there is no reason we can’t pick some wickets up. “