An hour’s drive inland from the French coast, a dozen Vietnamese men nurse tea over a smoking campfire, as they wait for a phone call from the man they call “the boss”. An Afghan man, they say, who opens trailers in the lorry-park nearby and shuts them inside.

“I have some Vietnamese friends in UK, who will help me find jobs when I get there, “he told me. “These friends help me get on lorries or container trucks to go across the border.”

Security is much less tight in the nearby lorry park than around the ports further north. But few people here have managed to get past the border controls.

We were told there is a two-tier system in operation here; that those who pay more for their passage to Britain don’t have to chance their luck in the lorries outside, but use this base as a transit camp before being escorted on the final leg of their journey.

A Vietnamese smuggler, interviewed by a French paper several years ago, reportedly described three levels of package. The top level allowed migrants to ride in the lorry cab and sleep in hotels. The lowest level was nicknamed “air”, or more cynically “CO2” – a reference to the lack of air in some trailers.

A local volunteer in the camp told us that they’d seen Vietnamese and British men visiting migrants here in a Mercedes. And that once migrants arrived in the UK, some went to work in cannabis farms, after which all communication stopped.

“We can do anything,” he says, “construction work, nail bars, restaurants or other jobs.”

A report by one of France’s biggest charities described smugglers telling Vietnamese migrants that refrigerated lorries gave them more chance of avoiding detection, and giving each of them an aluminum bag to put over their heads while passing through scanners at the border.

No one here had heard about the 39 people found dead this week.

This journey is about freedom, one said. 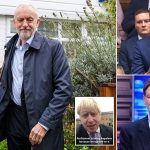