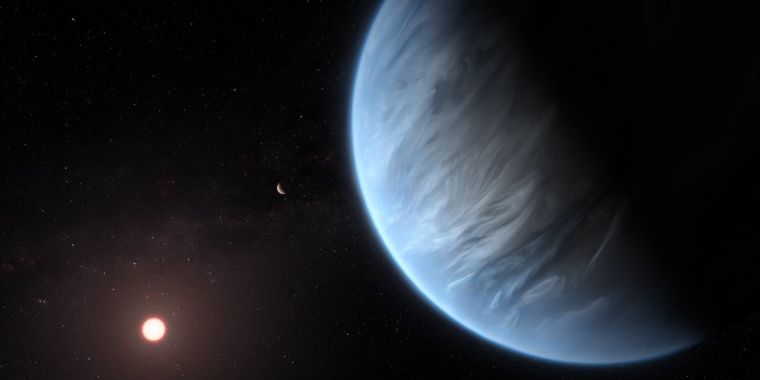 On Wednesday, astronomers announced the first detection of water in the atmosphere of a planet that orbits within the habitable zone of its host star. The planet, K2 – 18 b, is certainly not habitable by us, as it’s a mini-Neptune that may not have any solid surface and is likely to have a hydrogen / helium-rich atmosphere. But the discovery of water vapor and clouds confirms expectations that the Earth isn’t necessarily special in having water at a distance from its star where that water could be liquid.

As the planet’s designation indicates, K2 – 18 b was discovered during the extended second mission of the Kepler space telescope. After the failure of some of the telescope’s pointing hardware, NASA figured out how to keep the optics stable byusing its solar panels. This allowed Kepler to examine additional areas of the sky during what was termed the K2 mission.

K2 – 18 b is a large planet, as follow-on observations have indicated its mass is over eight times that of Earth’s. It’s close enough to its host star that it only takes 33 days to complete an orbit. But, because the host star is much smaller and cooler than the Sun, that means K2 – 18 b only gets slightly more light than Earth does (1441 Watts / square meter versus 1370 for Earth). That’s consistent with the planet having a temperature that allows liquid water to exist.

There is a big difference between “consistent with” and the actual temperature though. A lot depends on the presence of greenhouse gasses in the atmosphere. Models of planet formation indicate that K2 – 18 b is probably large enough to have hung on to the hydrogen and helium that it started with, but the presence of other gasses in its atmosphere have yet to be determined. And K2 – 18 b is likely to resemble Neptune, with no obvious surface, while temperatures and pressures increase as you move toward the planet’s core.

Still, water on the planet could be in equilibrium with water vapor in the atmosphere, allowing it to be detected. And K2 – 18 b has several features that make it a good candidate for detection. It’s large relative to its host star, meaning that a larger fraction of the starlight will pass through the atmosphere on its way to Earth when the planet is between the star and us. And its relatively short orbit means that it’s possible to obtain multiple observations of the atmosphere in just a few years.

So, while the presence of water vapor on K2 – 18 b would probably not tell us anything about the habitability of that planet, it would indicate that water is likely to exist within the habitable zone of other stars, making any planets there worth careful observation.

Over a period of three years, researchers were able to obtain Hubble observations of eight transits where K2 – 18 b passed between its host star and Earth. These were combined with observations from Kepler itself, as well as some additional data from the Spitzer space telescope (in part usinga software package named “batman”). The star’s rotation is slightly faster than the planet’s orbit, but the researchers saw no evidence that the equivalent of sunspots were complicating the analysis of the observations.

The spectra produced by a model that includes water vapor is a much better match to the spectrum present in data from the star. The signal is significant at a level of 3.9 sigma. In addition, the model suggested that the water vapor would condense at an altitude that’s consistent with the indications of clouds seen in the observations. The apparent condensation and formation of clouds suggests there could be something like a water cycle happening in the atmosphere of K2 – b.

But again, it’s important to emphasize that we don’t know if this planet has anything like a surface for the condensed water to rain down on.

This is another reminder that “habitable zone” doesn’t mean “habitable.” But the results are still significant in a couple of ways. While we had seen water vapor in the atmospheres of other planets, and there was no reason to expect that it wouldn’t show up in the habitable zone, confirmation of our expectations is always a good thing (though disconfirmation can be, too.)

The other important result here is due to the fact that Neptune-like planets have turned out to be much more common than we might have expected, and we don’t have a strong sense of how their composition might vary based on distance from their host stars. As noted above, planet formation models also make predictions for the composition of their atmospheres, so a better understanding can help test how well we understand planet formation.

So, even if this doesn’t bring us any closer to understanding habitability, the new study still provides important information. 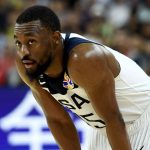 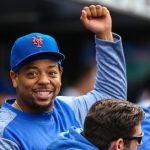