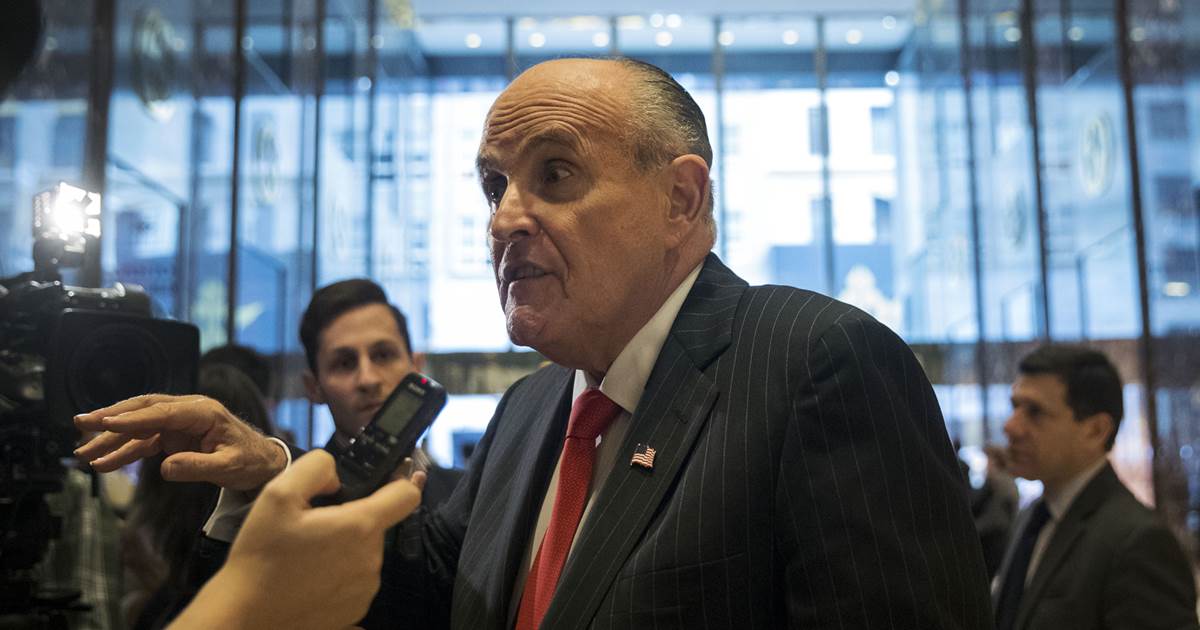 President Donald Trump’s personal lawyer Rudy Giulianigave a wide-ranging interview on Saturday in which the former New York City mayor attacked numerous figures involved in theimpeachment hearingsand claimed for the second time to have “insurance” when questioned whether he would stay in the president’s good graces.

“I ‘ ve seen things written like he’s going to throw me under the bus, “Giuliani said in an interview with Fox News’ Ed Henry about the characterizations and comments made in the media about him and his relationship with the president. “When they say that, I say he isn’t, but I have insurance.”

“This is ridiculous,” he added. “We are very good friends. He knows what I did was in order to defend him, not to dig up dirt on Biden.”

Hours later, Giuliani claimed on Twitter that the insurance policy he was referring to consisted of “files in my safe” that allegedly show ways former Vice President Joe Biden’s family had been “monetizing” his decades in office. These files would apparently become public if Giuliani were to “disappear,” he said in the tweet.

The statement I’ve made several times of having an insurance policy, if thrown under bus, is sarcastic & relates to the files in my safe about the Biden Family’s 4 decade monetizing of his office.

If I disappear, it will appear immediately along with my RICO chart.

This pivot comes after Giuliani has twice mentioned an unnamed form of “insurance” when asked whether Trump would remain loyal to him. It also follows the conclusion of two weeks of impeachment hearings in which the former mayor’s name has been invoked multiple times by State Department officials who are testifying before aDemocrat-led inquiry into whether President Trump improperly withheld military aidto Ukraine.

Multiple senior diplomats said during the public hearings that Giuliani spreaddebunked conspiracies that Ukraine interfered in the 2016 electionand attempted to pressure the Ukrainian governmentto announce investigations into Burisma– the Ukrainian gas company that Hunter Biden joined as a board member in 2014.

Democrats in the House of Representatives have engaged in an impeachment inquiry to uncover whether Trump was attempting to force an investigation into Burisma as a means to harm his political opponent, former Vice President Joe Biden.

Let our news meet your inbox . The news and stories that matters, delivered weekday mornings.

Biden appeared ina recent interview with CNNto discuss some of these issues, and Giuliani described Biden’s performance as a “poor impersonation of the Godfather.”

“You’d have to be a fool to not know your son was under investigation,” Giuliani said, later claiming that Biden was “lying.”

Meanwhile, two of Giuliani’s associates – Lev Parnas and Igor Fruman – werecharged with funneling money from foreign entitiesto US candidates to buy influence. Giulani has previously said that they wereinvolved with him in an effort to encourage Ukraineto investigate the Bidens.

When asked whether he feared that his associates’ criminal charges would extend to him, Giuliani became fiery.

“You think I’m afraid ? ” Giuliani said. “You think I get afraid? I did the right thing. I represented my client in a very, very effective way. I was so effective that I discovered a pattern of corruption that the Washington press has been covering up for three or four years. “

The interview at times became contentious, especially when Giuliani claimed he was being used as a scapegoat by the media and various political figures.

“Damn it, the mafia couldn’t kill me, your colleagues are not going to kill me!” Giuliani told Henry, referring to his time as the United States Attorney for the Southern District of New York in which he worked to indict members of New York City’s organized crime families.

All acts, she said, that ultimately led former National Security Adviser John Bolton to describe Giuliani as a “hand grenade.”

Giuliani was also quick to push back on that characterization and fire back at Bolton.

“For John to say I’m a hand grenade, then he’s an atomic bomb,” Giuliani said.

New doc uments from the State Department obtained by an ethics group show, however, thatGiuliani reached out personally to Secretary of State Mike Pompeoto further his smear campaign against Ambassador Yovanovitch who was removed from office in April.

The former New York City mayor maintained during the interview though that everything he did related to Ukraine was done in the defense of Trump, and that Bolton wouldn ‘ t understand because he was not involved in Giuliani’s role as a defense lawyer.

“I didn’t go tel l the White House what I was doing as a defense lawyer, “Giuliani said. “I did it privately. What I did there had nothing to do with his foreign policy, good or bad. I didn’t get involved in foreign policy. I was involved in gathering very, very significant evidence to exculpate my client.”

Trump defended Giuliani on Friday, calling him “a great crime fighter” during an interview with “Fox and Friends” and lauding him as “the best mayor” and “a very legendary figure in our country.”

The pair apparently remain very close, according to Giuliani.

“You can assume I talked to him early and often and have a very, very good relationship with him, “he said.

Phil McCausland is an NBC News reporter focused on the rural-urban divide.