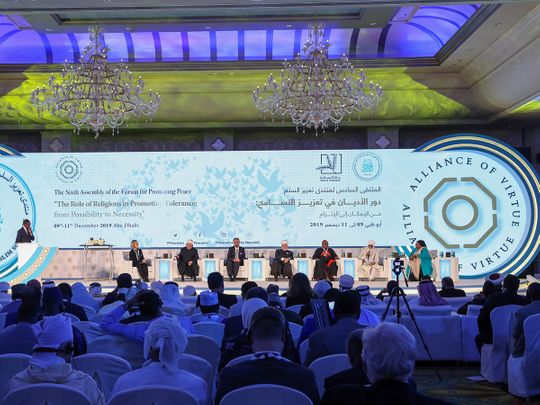 Abu Dhabi: A group of the world’s most respected Islamic scholars, faith leaders joined by experts from governments, and representatives of civil society organisations signed on Tuesday a new charter to build global peace, based on tolerance and religious freedom.

Launched and endorsed during the final day of the sixth Assembly of the Forum for Promoting Peace in Muslim Societies in Abu Dhabi, the “New Alliance of Virtue”, aims to elevate religious freedom, cooperation, and tolerance from mere possibilities to necessary ethical commitments and legal obligations, especially in relation to the protection of places of worship whose attacks have threatened freedom of religion in many parts of the world.

This initiative draws direct inspiration from the earliest traditions of Islam.

The three-day interfaith meeting was held under the patronage of Sheikh Abdullah Bin Zayed Al Nahyan, Minister of Foreign Affairs and International Cooperation, with the theme “The Role of Religions in Promoting Tolerance: From Possibility to Necessity”.

The new charter was welcomed by more than 1,000 government officials, leaders of the Abrahamic faiths, thought-leaders, experts, policymakers and media persons.

Considering the current state of global affairs, the signatories affirm that religion continues to play a vital role in global governance and cultural diplomacy, and there is a dire need for a 21st Century Alliance of Virtue.

The fifth Assembly of the Forum for Promoting Peace in Muslim Societies, was held in December 2018 under the theme ‘An Alliance of Virtues for the Common Good’.

The New Alliance of Virtue is built upon the following principles: Human Dignity; Freedom of Conscience and Religion or Belief; Tolerance; Justice; Peace; Mercy; Kindness; Keeping Covenants and Solidarity.

The highlight of the discussion was the charter for the Forum’s “New Alliance of Virtues” initiative, drawing different religions together to fight for the common good.

The new initiative was built upon international law and the resolutions of the United Nations; the Amman Message (Nov. 2004), the “Common Word” open letter (October 2007), the Marrakesh Declaration for the Rights of Religious Minorities in Muslim-Majority Lands (January 2016), the Washington Declaration of the Alliance of Virtue for the Common Good (February 218), Human Fraternity Declaration (February 2019), Makkah Declaration (May 2019), and acknowledged the Roman Catholic Church’s Declaration of Religious Freedom.

The original Alliance of Virtue (Hilf al-Fudul) was established in early 7th century AD (late 1st century BH) Makkah, in the house of Abdullah ibn Judan. Its purpose was to defend the weak and the innocent against the rapaciousness of those more powerful.

Last February in Washington D.C., Shaykh Abdullah bin Bayyah, President of the Forum for Promoting Peace, led a panel of over 200 individuals from the three Abrahamic faiths and others, comprising religious leaders and senior politicians in creating the modern Alliance of Virtue between religions.

The charter of the New Alliance of Virtue follows the model of the original, on a global scale. It brings together those of good-will for the benefit of humanity, an effort across religions to enable its members to live side-by-side in peace and happiness.