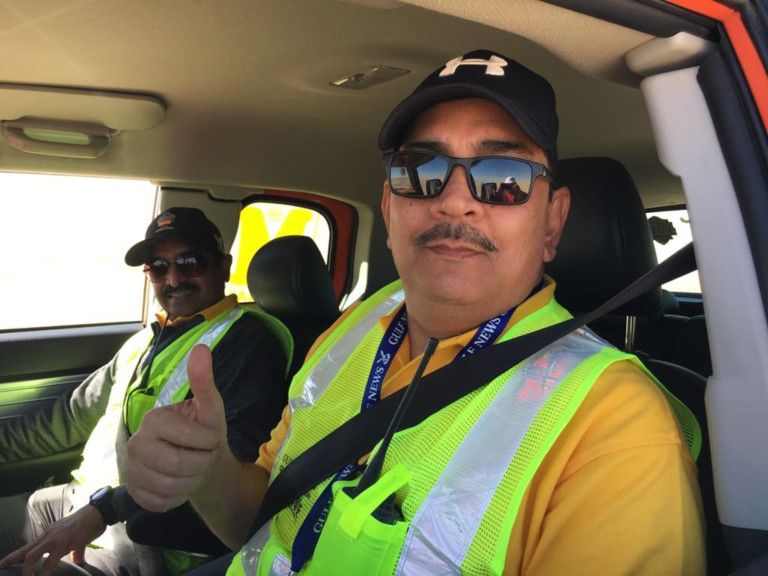 Dubai: The call of the desert is too loud to ignore. When it beckons, I have to yield. The Gulf News Fun Drive is one such annual event that I can’t miss for the world. If I am not participating in the drive behind the wheel of my 4×4, I still enjoy the fun being involved in the jamboree as a volunteer. It’s a great opportunity to be in the midst of all the excitement. My team has been allotted the first checkpoint to tick off the Fun Drive numbers on our checklist as and when the vehicles of the convoy arrive. We then convey the message to the control room in Swaihan to ensure every participating vehicle is accounted for.

It’s a pleasure to see the glee on the face of the first driver to reach our checkpoint. For them it must be a huge sense of achievement inspiring them to stay ahead and – provided they don’t get stuck along the way – reach camp, which, this time, is same as the start point, as the route director John Spiller has created a loop format through sand dunes and gravel track .

Our checkpoint, which was 30-km from the flag-off point, received its first driver Ahmad Hussain in his red Jeep Wrangler sporting the FD number 395. Though he was in a hurry to move on and maintain his lead, he spared a few seconds to speak to Gulf News, and said, “The drive so far has been easy,” adding that he expected the drive ahead to get more challenging and fun.

Then there was a steady stream of Fun Drive vehicles in all shapes, colours and sizes. The vehicle marque or its capacity didn’t matter, what did was their enthusiasm. There were novices and then there were veterans, and the adrenaline rush was the same in all participants.

Some vehicles had a single occupant (the driver), while others were occupied fully with the entire family of all nationalities. If some of them were already exhausted, especially the novice drivers, we perked them up by saying the drive ahead would be quite exciting and provided them with information on the next checkpoint and the approximate time that would take them to reach.

Every once in a while we had marshals’ vehicles crossing our checkpoint. They are very crucial to making the Fun Drive memorable for the drivers.

The marshals are ever ready to help out people when they face difficulties or get stuck in their tracks.

The weather, though chilly early in the morning, became pleasant after the sun had risen. Adding to the pleasantness was the happiness on the faces of Fun Drive participants, young and old.

Having been associated with the Gulf News Fun Drive since 2010, I could recognise several ‘regulars’, who, like me, also find it hard to ignore the desert’s lure.

Our team comprising five staff members from various departments, with Abdul Kareem, Chief Librarian, as our captain, included my editorial colleague Satish’s son Arjun. By witnessing all the excitement, I am sure the 13-year-old boy would persuade his dad to sign up for next year’s Fun Drive as my younger son Vikas, now an IT professional, did when he accompanied me as a volunteer 10 years back when he was in his Grade 8 in a Sharjah school.

We met up with marshal Anil Berri and his navigator V Nagavardhan. Berri said: “The route in the first section had been excellent and there was nothing much to do. Further sections ahead too won’t be difficult if the fun drivers stay on track,” he added.

There’s more to catch up at the campsite where entertainment and sumptuous food is awaiting.

The tally of more than 700 was sent to the control room by noon before we signed off and headed to camp.