Home Depotshares tumbled Tuesday after the company once again cut its 2019 forecast, and also reported same-store sales well below estimates.

The company said revenue, which also missed analysts’ targets, was hurt by investments it is making in its business. Earnings came in a penny better than expected.

Shares of Home Depot were down about 5% in premarket trading, putting it on pace for its worst day since Feb. 5, 2018, when the company lost 5.6%. Shares of rivalLowe’s, which reports its earnings before the bell on Wednesday, were down nearly 2% before the market’s open.

The company said the investments it’s making in its business have yet to benefit its sales. Home Depot has been spending money updating its stores and digital platform while also improving its supply chain.

“We are largely on track with these investments and have seen positive results, but some of the benefits anticipated for fiscal 2019 will take longer to realize than our initial assumptions, “CEO Craig Menear said 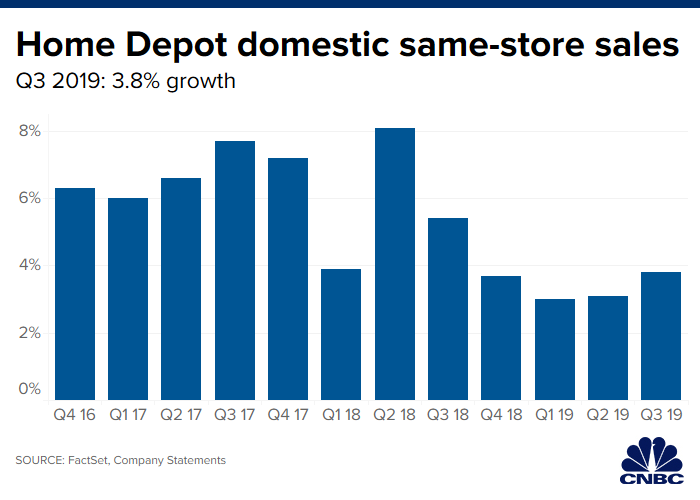 Home Depot said its average customer ticket in the third quarter was $ 66. 36, which was higher than it saw in the year ago quarter. Sales per square foot also rose to $ 449. 17 from the year-ago period .

Correction: An earlier version of this story misstated the forecast for global same-store sales. Analysts were predicting a gain of 4.7%.