The government had been hoping the election would bring a show of support from the so-called “silent majority” opposed to the protests.

Instead, it saw some significant pro-Beijing candidates lost council seats.

But Chinese media have largely focused on the need to restore order.

‘No need to over-interpret the victory’

Reaction from state media outlets has ranged from making no reference at all to election results to overt claims that “tampering” had taken place.

State broadcaster CCTV’s daily news program Xinwen Lianbo stayed silent on the results, instead accusing the US of interference.

Xinhua, the state’s press agency, made some allusion to the fact that elections had taken place over the weekend but pivoted back to the violence of recent weeks, stressing the need to restore order.

News outlet the Global Times did cover the elections in detail,concluding in and English-language article that the pan-democrats had “scored a big win”.

However, the report also said there was “no need to over-interpret the victory of pan-democrats”.

The Global Times’ editor Hu Xijin, known for his outspoken comments, mentioned on Chinese social media site Weibo that the pro-Beijing camp had failed, but added that the district council elections were on a very “local level”.

English-language paper China Daily reported that the elections had concluded,but made no reference to the pro-democracy camp’s victory.

China Daily separately posted a picture on Twitterwith the caption: “That’s how the oppositions [sic] tampers with a fair election.”

The picture accuses protesters – without evidence – of taking citizens’ ID cards to stop them from casting their votes, and of misleading the elderly to vote for pro-democracy Councillors.

Hong Kong’s district councillors have only limited political influence – they most deal with very local issues like transport and amenities.

But Sunday’s election drew particular attention because it was the first vote to take place since anti-government protests first began in June.

Some of the councillors will also play a role in choosing the next chief executive, Hong Kong’s leader.

A record 4.1 million people had registered to vote – more than half the population – and more than 1, 000 candidates ran for 452 electable seats.

Candidates sympathetic to the pro-democracy cause won a total of 347 seats and according to local media, now control 17 of the 18 councils.

The protests were triggered bya bill which would have allowed suspects to be extradited to mainlandChina.

This bill prompted fears that China was increasingly encroaching on the city’s autonomy, including its right to judicial independence .

On Monday, China’s foreign ministry summoned the US ambassador to protest against the passing of the bill, accusing the US of “meddling in Hong Kong affairs and interfering in China’s internal matters “.

Beijing warned there would be” consequences “if the bill is signed into law. 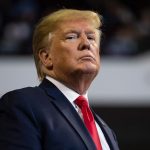