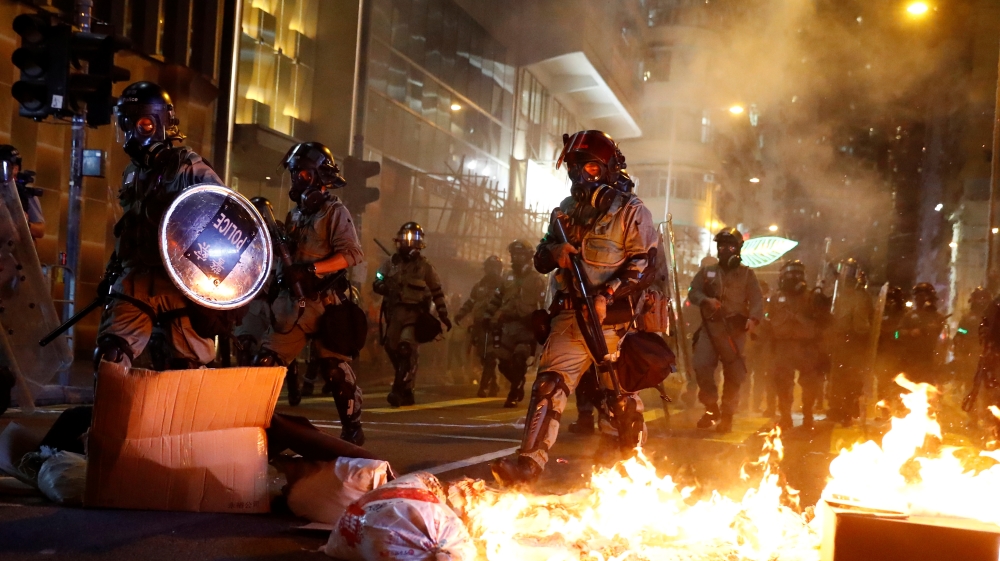 To sidestep the ban, pro-democracy candidates re-billed Saturday’s gathering as a rally for local elections later this month, which does not require the same approval for smaller assemblies.

“We are demanding human rights and democracy for Hong Kong and asking for help from other countries,” Jenny Cheung, a 70 – year-old retiree , told Al Jazeera.

Rallies are set to take place on Saturday in many cities around the world including New York, London and Sydney.

“These give us a new inspiration and are very encouraging,” Cheung said.

She added: “We need them to hear our voice, keep appealing and appealing. We try our best to seek as much attention from the outside world. Otherwise nobody will pay any attention to it.”

As protesters fled the rally, demonstrations devolved into teargas-filled clashes in several neighborhoods.

Around the city, protesters erected barricades, dug up street bricks, set fires, threw petrol bombs and vandalised franchises viewed to be friendly to Beijing, including Starbucks.

In Wan Chai, police trapped and detained dozens near a playground.

As unrest convulsed the city, police cancelled two authorized rallies in the central business district later in the afternoon, including one in support of the passage of the US Human Right and Democracy Act, which would require the United States to annually assess Hong Kong’s autonomy and punish its violators. The bill passed in the house in October.

The government has taken controversial steps to curb the protests, including banning face masks[Casey Quackenbush/Al Jazeera]

Protesters have been pouring onto the streetssince Junewhen the Beijing-backed government introduced a deeply unpopular extradition bill that has since been shelved.

But the demonstrations, which regularly turn into clashes with police, have evolved into a wider movement against alleged Chinese interference into the former British colony, which enjoys freedoms unseen on the mainland as a semi-autonomous region. Beijing denies interfering in Hong Kong affairs and has accused Western countries of stirring up unrest.

While the government has withdrawn the extradition bill, protesters refuse to back down until all five of their demands are met, including free elections and an independent investigation into police violence.

Instead, the government has taken controversial steps to curb the protests, including banning face masks and barring prominent democracy activist Joshua Wong from running.

As protesters on Saturday began streaming into the park, policewarnedthey were committing an offence by gathering illegally and that mask-wearers were defying the face-covering ban, calling on “all protestors to leave immediately and stop occupying the road “.

A 60 – year-old housewife who was walking by the park said she stopped attending the protests in August because of the violence.

“It’s dangerous for myself,” said the woman, who asked to be identified as Ms Chung. “We cannot support the government otherwise we will be beaten.”

Saturday’s protest followed news from the Chinese government signalling that Beijing would take steps to “safeguard national security” in Hong Kong, boosting patriotic education and improving how officials are selected.

“We’re really very tired, but we have support from foreigners and it gives us some courage,” said Siu Ling Ma, 37, a hospital worker who attended the rally with her 18 – month-old son on her chest.

“Of course it is a fight for my children. When they grow to 2047 [the year Hong Kong will fully return to Chinese control], I don’t want them to lose most of their freedom and the rights we have enjoyed in the past. “

A 40 – year-old protester who works in IT, who asked to be identified as Jason, said he expected the protest movement to go on for months, “maybe even years”.

“We need to keep the fight for freedom,” he said. “The most important thing is we need to do is stand up and voice our freedom no matter what China does. “ 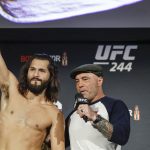 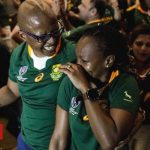