Among the new polysyllabic characters (called hétǐ zì 合體 字 [“compound / synthesized characters”] in Chinese) created by the Hong Kong protesters is this one (see below in the “Readings” [especially the first item] for other examples). It is preceded by this note: “Hongkongers will remember 721 831 “, which are references to the extreme brutality wreaked on the people of Hong Kong by hired gangsters on July 21 and by “police” on August 31, for which see(Yuen Long Nightmare) And# 831 Terrorattack(alsohere). This new polysyllabic character is widely circulating on the internet and has come to me from many sources (here’s one). 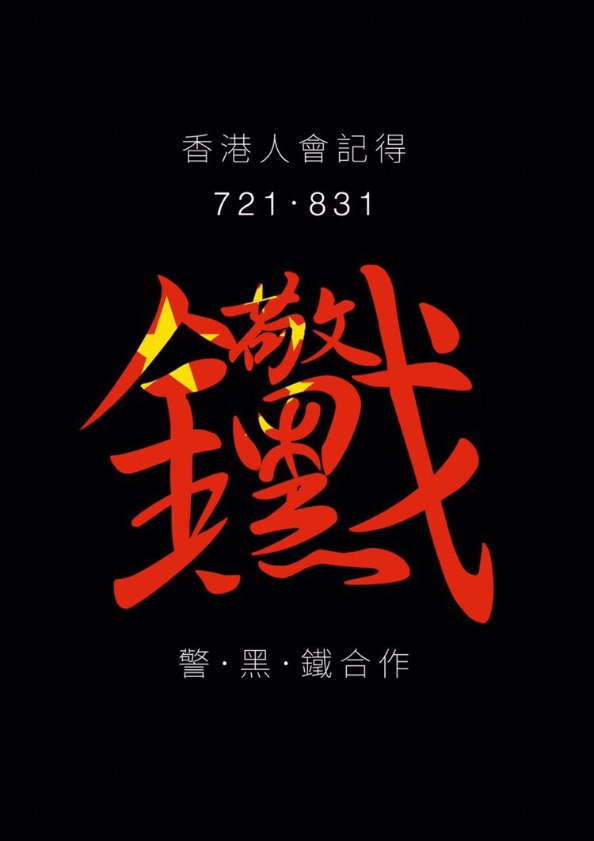 This composite character consists of elements of the following three Sinographs:

It alludes to the collusion of police, hired gangsters, and railway authorities in the notorious beating of passengers describedhere:

The2019 Yuen Long attackwas a mob attack that occurred on (July) , inYuen Long, Hong Kong. A mob of over 100 armed men dressed in white indiscriminately attacked civilians on the streets and passengers in theYuen Long MTR stationincluding the elderly, children, black-clad protesters, journalists and lawmakers. At least 45 people were injured in the incident, including a pregnant woman. The attack happened following ananti-extradition bill protestinSheung Wan, Hong Kong and was an act threatening the pro-democracy protesters who were returning home to Yuen Long.

Despite thousands of reports made to the999 emergency hotline, the police did not arrive for more than 30 minutes and finally arrived one minute after the mob had left the station. No arrests were made that night. Many accused the police of failing to protect citizens from being attacked, with some even alleging that the police colluded with the mobs.

One of the strongest weapons of the Hong Kong protesters against the armed might of the police, thugs, and increasingly military infiltrators from the north is language, both spoken and written, as described in this post and in the following earlier posts.