Clarisse Yeung believes the road to full democracy inHong Kongwill pass through a dog park. Specifically a dog park that she has promised to build if her coalition sweeps local elections today.

The district council elections held in Hong Kong every four years are normally a sleepy affair, with low turnout, mostly because councillors have very limited powers and budget, as well as a reputation for graft.

But this year poll has come to be seen as a de-facto referendum on the nearly six-month-old protest movement, sparked by opposition to an extradition law that would have destroyed Hong Kong’s legal protections, but which has morphed into a broader pro-democracy campaign.

Yeung, an energetic young artist, says she spent a dispiriting four years as the sole opposition member of a 13 – strong council controlled by pro-Beijing representatives in central Wan Chai, battling inertia and outright opposition to even modest plans for the neighborhood, from pet-friendly gardens to better buses.

Now she hopes a wave of protest-driven outrage, which has mobilized both voters and candidates, combined with her track record of commitment to local issues, could swing control of the council.

“I had been questioning if I should run again. It’s been so heavy, being the only pro-democracy representative in Wan Chai, ”she said, as she campaigned on a street corner with a band of supporters, handing out leaflets, stroking dogs and chatting to toddlers. “I’m glad all these friends are coming out after the [protest] movement: they are my hope.”

While Hong Kong enjoys civil rights such as freedom of assembly and the press, its residents do not choose their leader, or all members of its mini-parliament, the legislative council. The district council poll is the only direct election.

For the first time, pro-democracy candidates are challenging every one of the 452 wards up for grabs, and have coordinated campaigns so they don’t split the vote. Former one-person campaigns are newly flush with volunteers. Young people in particular have raced to register to vote, to volunteer on campaigns and even to run for office themselves.

Yeung has taken advantage of this city-wide political awakening to recruit nine other candidates to stand in neighbor wards on a “kickstart Wan Chai” platform. They range from a graphic designer to the veteran former policewoman Cathy Yau, who resigned her post in June as the protest movement kicked off, shocked by colleagues’ brutality.

All are novice candidates, and many decided to stand only in the past few months, despite the very real threat of physical violence; several pro-democratic candidates have been attacked, with one losing his ear after an attacker bit him and stabbed others. A pro-Beijing candidate was also stabbed. The attacks have led to fears about voter intimidation or fraud, especially after authorities announced riot police would guard all polling stations. In a hint at the febrile atmosphere, the government sent out an official press release stating “the ballot is secret”, apparently to counter rumors that facial recognition software might be used, and voters would be filmed.

“I always wanted to go into politics eventually, after becoming expert in my field. But I was inspired by the protests, and realized I can’t wait any longer, ”said Louis Mak, a data analyst who has given up his job to campaign full time for the Canal Road ward.

“Maybe in four years or eight years, we won’t have real elections any more. China may take actions against our civil society. And so that’s why I have stood in this election. ”

Deep pockets, a powerful electoral machine, lack of voter interest and a fractured opposition have meant pro-Beijing parties control all but one of the city’s 18 district councils.

In Wan Chai, the battlegrounds are tiny, densely populated areas, and the margins small. Mak says his district is just a couple of blocks, where the winner in 2015 claimed victory with 1, 000 votes and a margin of 200.

Mak put his chance of winning office at “around 50 – 50 ”, and is campaigning more than 10 hours a day. “We have to pull voting rates up to historical levels so we can take over Wan Chai.”

Pro-Beijing politicians have been open about concerns they might be swept from power. One of the most prominent, the lawmaker Regina Ip, warned against voting for pro-democracy candidates in a column in theSouth China Morning Post.“Hong Kong’s story doesn’t have to end in tragedy”, she told readers.

An opposition landslide would have little immediate political effect, as the councils are fairly toothless. But longer term, it could slightly shift the balance of power, because district councils have a role in arcane, complex elections to choose the city’s leader and part of its legislature.

Another well-known establishment politician defending a seat in Wan Chai said he remained optimistic, but admitted that a loss would be devastating.

“The people here are the pillars, the ones who uphold the establishment. If we lose this constituency that means something is really, really wrong and troubled in HK, ”said the lawyer Paul Tse, who also holds a seat in the city’s legislative council. “It sounds very serious, but it’s very difficult to have so many people against the government.”

At one point there were widespread fears that the poll would be delayed amid unrest and unprecedented disruption. But China appears to have decided that would be so inflammatory in a city already on edge, that a possible drubbing at the ballot box is the lesser of two evils.

“Its not the right sort of atmosphere for a fair election, but in a way we are constrained,” Tse said. “If we don’t do the election they will blame us for being afraid.”

But where Tse sees a canker at the heart of Hong Kong, his challenger in the prosperous Broadwood district – part of the “Kickstart Wan Chai’ ”slate – sees hope.

Arthur Yeung, who is no relation to Clarisse, turned 24 the day before the poll. He spent his birthday at a campaign stand on the main road, waving to drivers, thrusting leaflets through windows and chatting to any who stopped.

Dawn and her dog Chicco, his collar bearing a rosette supporting Yeung, campaigned beside him for hours. “I want to support youth, and passion for change,” she said.

Yeung always hoped to run for office and spent much of the last year in Broadwood organizing against an unpopular development, canvassing support for Clarisse’s dog park plans – easy in an area famous for dog lovers – and running other grassroots projects.

But until the protests kicked off, most of his friends thought he was crazy. Councils were widely seen as irrelevant, incompetent, self-serving political machines. There is even a Cantonese shorthand for the corruption, a list of the local delicacies that candidates ply supporters with to secure votes.

“Half a year ago, people would say to me:‘ Why don’t you get a normal job, ’” he says with a wry smile. “Now they say:‘ You are very inspiring to our generation. Your mission is very clear and passionate, so thank you for bringing some good things for Hong Kong ’. Its a very big change. ” 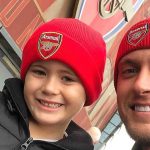