Washington (CNN)The House Oversight Committee on Tuesday filed a lawsuit against Attorney General William Barr and Commerce Secretary Wilbur Ross to compel them to comply with subpoenas issued as part of their investigation into the Trump administration’s push to add a citizenship question to the 2020 census.

In the85 – page filing,the committee said the suit arises out of the secretaries’ “unlawful refusals to comply with duly authorized, issued, and served Committee subpoenas.” The committee opened an investigation earlier this year into the proposed census question, and in July, theHouse voted to hold Barr and Ross in criminal contemptover their noncompliance in the probe.

The filing states that although its investigation has already revealed a trove of information about the “true origins” of the push to include the citizenship question on the census next year, Barr and Ross “have refused to provide … critical documents and communications.”

“The Committee’s accommodation efforts included identifying a subset of priority documents for production, but the Defendants produced documents that are redacted, already in the public domain, not responsive, and / or missing attachments, “the lawsuit states.

In June, the Supreme Court blocked the questionfrom being added to the census.

CNN has reached out to the Justice and Commerce departments for comment. Following the House vote earlier this year, the departments argued that they have been working in good faith to respond to requests from the committee and have already submitted thousands of pages of documents to the panel.

The committee’s new chairwoman, Democratic Rep. Carolyn Maloney of New York, said in a statement on Tuesday that “Despite the Supreme Court ruling and the House contempt vote, Barr and Ross have continued to refuse to produce any additional documents in response to the subpoenas over the past four months.”

Maloney, who took over the committee after its former chairman,Rep. Elijah Cummings, died in October,said she was “filing this enforcement action today because the Trump Administration’s brazen obstruction of Congress must not stand.”

“Our beloved former Chairman Elijah Cummings launched this bipartisan investigation because he believed with all his heart that the Constitution requires Congress to ensure that the rapidly approaching Census is conducted in a professional manner that promotes accuracy, ensures integrity, and is free from partisan politics – and I couldn’t agree more. “

After the high court’s decision last summer,President Donald Trump created uncertaintyover what would happen when he insisted that efforts to add the question were “absolutely moving forward” despite statements from both his Department of Justice and secretary of commerce that the administration was printing the census without the question. But the President laterretreated,instead asking government agencies to provide records that could determine a head-count of citizens without polling census-takers directly. 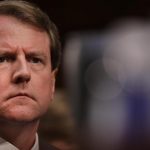