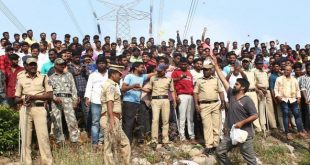 Police at the encounter site where the four accused in the rape and murder of the woman veterinarian were killed. (ANI photo)

HYDERABAD: In a sensational development, all four accused – who were allegedly involved in the gang rape and murder of a veterinary doctor – were gunned down by Cyberabad police in an encounter in the wee hours of Friday at Chatanpally in Mahabubnagar district, where the victim was earlier set ablaze by the accused.
Top sources in Cyberabad police confirmed to TOI that the accused Mohammed Areef, Naveen, Shiva and Chennakesavulu were killed in the encounter.
Cops claimed all four accused tried to escape while the crime scene was being reconstructed and were killed in the encounter
Hyderabad encounter live updates: All 4 accused in vet rape-murder case gunned down

The encounter took place just few meters away from the place where the veterinary doctor was s et ablaze.

Hyderabad: Senior Police officials arrive at the site of the encounter. All four accused in the rape and murder of… https://t.co/Ono349 Phg3

The charred body of the victim, working as an assistant veterinarian at a state-run hospital, was found dumped under a culvert at Shadnagar on November 28 morning, a day after she went missing.
Four men, all lorry workers, aged between 20 and 24, were arrested on November 29 on charges of raping and killing the woman and had been sent to judicial custody for 14 days on last Saturday.
The Telangana government had on Wednesday issued orders for setting up a fast track court to try the four accused.
The government designated the court of first additional district and sessions judge in Mahabubnagar district as special court for speedy trial of the case.
Following the murder of the veterinary doctor, there has been national outrage and many across the country have been demanding that the accuses should be lynched or killed.
Read this story in Bengali
In Video:All 4 accused in Hyderabad gangrape case killed in police encounter 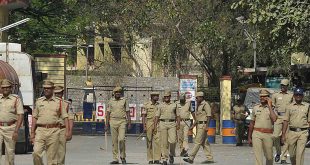 Auto Refresh Feeds Hyderabad vet rape-murder case LATEST updates: BJP MP from Delhi Gautam Gambhir urged for reforms in India's judicial system while reacting to the news of the encounter in which all four accused in the Hyderabad rape and murder case were killed by the Cyberabad Police on Friday. He said, "Judicial system needs to…