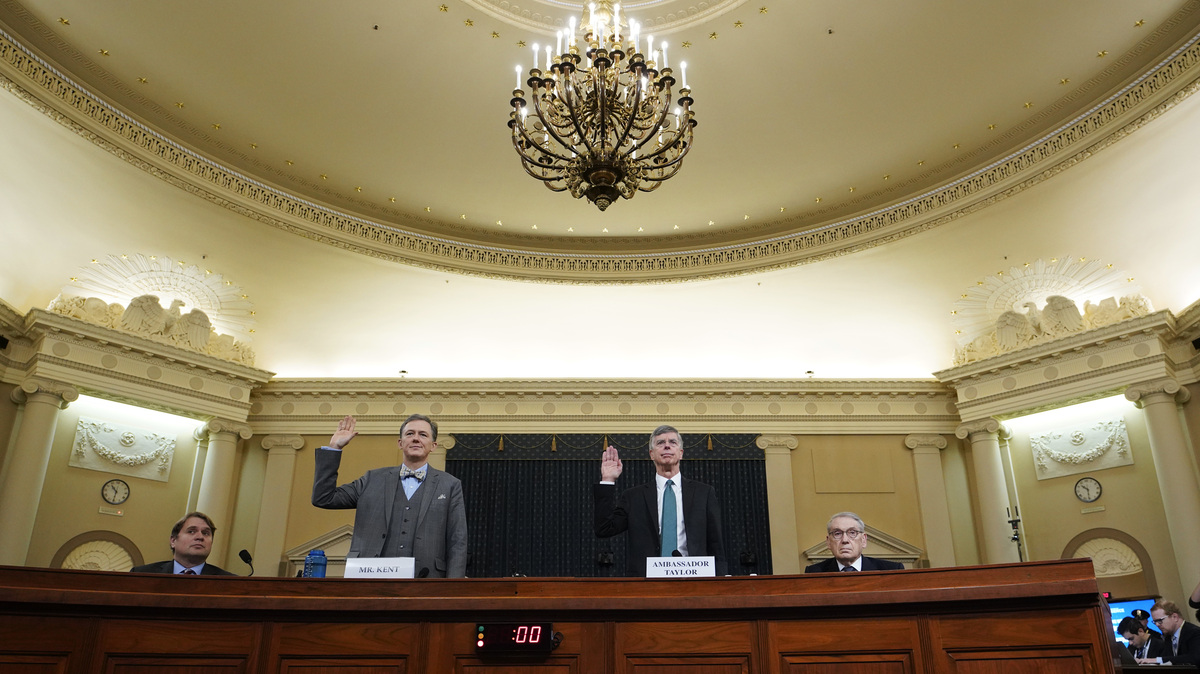 Deputy Assistant Secretary for European and Eurasian Affairs George Kent and top U.S. diplomat in Ukraine William Taylor are sworn in prior to testifying before the House Intelligence Committee on Wednesday.

The first week of Trump impeachment inquiry hearings is in the books.

If you were paying attention to the thousands of pages of closed-door testimonies, you would recognize some of the details that emerged.

But there were some new and important wrinkles from the public hearings with acting U.S. Ambassador to Ukraine William Taylor; George Kent, a top State Department official with oversight of Ukraine affairs; and Marie Yovanovitch, the former U.S. ambassador to Ukraine, who described a plot to oust her led by President Trump’s personal lawyer, Rudy Giuliani.

Here are seven takeaways from this historic and potentially consequential week:

1. It’s clear impeachment is shaping up to be a partisan affair

The two sides are pretty dug in. Nothing that got said in the public hearings seemed to move anyone. In fact, one of the more surprising developments might have been the stridency of New York Rep. Elise Stefanik’s defense in support of President Trump.

“[N] othing in that room today, and nothing in that room earlier this week, nothing rises to the level of impeachable offenses,” Stefanik contended after Yovanovitch’s hearing Friday, dismissing a question about the president’s tweet criticizing Yovanovitch. “This is wishful political thinking by the Democrats.”

Stefanik – withRep. Jim Jordan of Ohio, a member of the arch-conservative Freedom Caucus – emerged as the president’s staunchest and clearest defenders during the two days of testimony. What made Stefanik’s role so eye-opening is that Stefanik has frequently criticized Trump as a candidate and as president.

2. President Trump continues to be his own worst enemy

Nothing sums up Trump’s volatility more than the hour between 9 am ET and 10 am ET Friday. A little after 9 a.m. ET, just as Friday’s hearing was beginning, theWhite House released a record of an anodyne April callBetween President Trump and President Zelenskiy of Ukraine.

Intelligence Committee ranking member Devin Nunes read it into the record live on TV, and it appeared the White House and House Republicans had finally gotten on the same messaging page. That is until an hour later, whenTrump fired off a tweethotly critical of Yovanovitch as she was testifying.

Trump claimed “everywhere” she went “turned bad.” He even seemed to blame her for unrest in Somalia, a country she served in as a junior Foreign Service Officer that has a long history of political problems, violence and terrorism.

Everywhere Marie Yovanovitch went turned bad. She started off in Somalia, how did that go? Then fast forward to Ukraine, where the new Ukrainian President spoke unfavorably about her in my second phone call with him. It is a U.S. President’s absolute right to appoint ambassadors.

Some conservatives criticized Trump for it. Ken Starr, the independent counsel whose investigation led to President Bill Clinton’s impeachment, said on Fox News that Trump’s tweet showed “extraordinarily poor judgment” and was “quite injurious.”

Trump later defended himself, saying he has “freedom of speech.”

3. “Witness intimidation” and “bribery” emerge as potential articles of impeachment

The president’s tweet gives Democrats another arrow in their impeachment quiver. They very well could add witness intimidation or witness tampering to their growing list of potential articles of impeachment.

Another word that emerged this week was “bribery.”

“What the President has admitted to and says it’s ‘perfect,’ I’ve said it’s perfectly wrong. It’s bribery,”House Speaker Nancy Pelosi saidduring her weekly news conference. She was referring to the president saying his now-infamous July 25 call with Zelenskiy was ” perfect. “

During that call, Trump asks Zelenskiy for a “favor” to investigate a conspiracy theory about Ukraine’s involvement in the 2016 election and former Vice President Joe Biden and his son Hunter, who served on the board of aUkrainian energy company, Burisma.

“Bribery” is important as a word, because it happens to be in theConstitutionwhen referring to reasons a president could be removed from office.

4. A new witness says Trump didn’t give a “s ***” about Ukraine, only about “big stuff” like the “Biden investigation”

Republicans dismissed the witnesses brought forward as not having first-hand knowledge of presidential wrongdoing and that their testimonies were solely “hearsay.” That’s not exactly true – Taylor, for example, noted that he witnessed European Union ambassador Gordon Sellingland telling a Ukrainian aide to Zelenskiy that military funding was unlikely to come unless the country made a public statement in support of investigations important to President Trump.

But a new witness, David Holmes, a political counselor in the U.S. embassy in Ukraine, emerged in Taylor’s testimony.Holmes testified behind closed doors Friday. CNN obtained a copy of his opening statement, which NPR has confirmed.

The statement says Holmes heard Trump ask Sondland in a phone call at a Ukrainian restaurant, “So, he’s [Zelenskiy] going to do the investigation?”

Sondland reportedly replied, yes, Zelenskiy will do “anything you ask him to. “

Holmes also reportedly testified that Sondland said Trump didn’t give a “s ***” about Ukraine. He only cares about the “big stuff.” And the big stuff, according to Sondland, is what “benefits the president” – like the “Biden investigation that Mr. Giuliani was pushing.”

5. These were very credible witnesses

It’s not uncommon in political brawls for someone’s character to be impugned. But that was tough to do with the three witnesses who came forward this week.

They came across as dedicated and serious public servants with deep wells of experience – two U.S. ambassadors to Ukraine, one of whom is a decorated Vietnam veteran and West Point graduate, and a top State Department official with oversight over the country, who, for the past seven years, has overseen efforts to fight corruption in a multi-pronged way.

6. Democrats and Republicans will feel that they accomplished their goals

Democrats can say that the Democratic lawmakers on the committee and the witnesses came across as sober and serious. The witnesses corroborated each other and the whistleblower complaint and showed they had reason for concern about what the official U.S. foreign policy was toward Ukraine. And the witnesses testimony raised serious questions about the president’s conduct.

Republicans were able to give their base points to rally around. They were able to sow some doubt about how much the witnesses knew first hand about Trump’s role. The GOP effort also tried to show Trump might have reason to be skeptical of Ukrainians after some Ukrainian officials said negative things about him during the 2016 campaign and that corruption has been rampant in Ukraine, including, and perhaps especially, at Burisma. And Republicans repeatedly hammered home the point that a president can fire an ambassador at will.

7. This is “the beginning of the story”

This was just the first week of public hearings.

Previous Voting closes in Sri Lanka presidential elections marred by attack on convoy of Muslims – The Hindu, The Hindu
Next Vontaze Burfict sounds off, after having his name invoked in the Myles Garrett case – NBCSports.com, Nbcsports.com