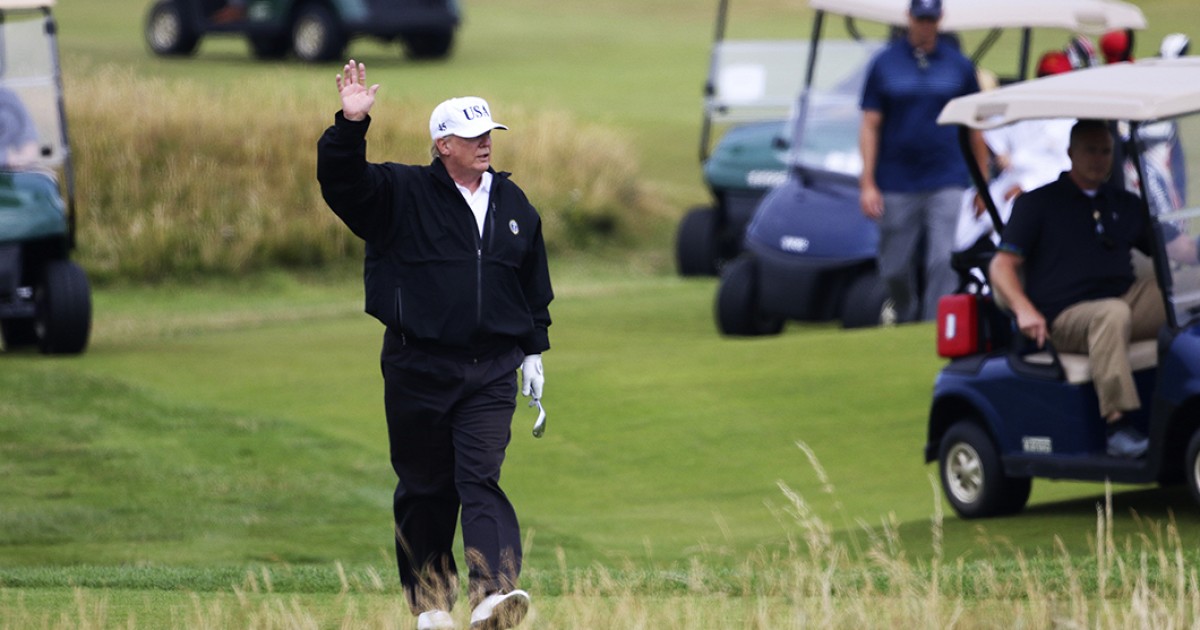 PoliticoreportedFriday that the US Air Force “may have helped line the president’s pockets” by making an “odd” refueling stop at an airport in Scotland not far from the Trump Organization’s money-losing Turnberry hotel and golf course.

House Democrats are investigating whether the Air Force’s stops at Prestwick Airport have “helped keep Trump’s Turnberry resort afloat,”Politico‘s Natasha Bertrand and Bryan Bender reported. “Accusations that Trump’s properties are unfairly profiting off of his administration have dogged the president since entering office,” the article reads. “But the potential involvement of the military takes the issue to a different level.”

The news was immediately picked up by other media outlets. MSNBC’s Rachel Maddow opened her program Friday with a monologue on the story, followed by an interview with Bertrand. “Now miraculously, now that Donald Trump is president, American military cargo planes have started refueling at that airport,” Maddow said, noting the military “spent $ (million on fuel [there] since October 2017, “even though” it would be cheaper to the military if that fuel had been purchased at a US military base. ”

“They’re stopping at the airport that Trump needs to prop up to keep his Scottish golf resort going,” Maddow declared.

Opposition political figures picked up the story, too. “The president is corrupt and must be impeached,” Democratic Rep. Alexandria Ocasio-Cortez tweeted in response to Bertrand.

The only problem with thePoliticostory was that it was not the whole story. In fact, it omitted so much important information that it hardly qualified as a story at all.

The piece focused on a single Air Force mission, a C – 17 military transport flight this year from the US to Kuwait and back. Bertrand and Bender reported that the plane stopped at Prestwick to refuel, and also that the crew spent the night at Turnberry. According to the article, crew members said they had never stopped at Prestwick before in dozens of trips back and forth between the U.S. and Middle East.

The article made several references to a June 21, 2019, document request sent by House Oversight Committee Democrats to the secretary of defense. The Pentagon has not yet responded to the House,Politicosaid.

But committee Democrats left a number of things out of their letter. Some are available in public documents on the internet, while some came from the Air Force in response to the story.

The first thing to note is that a public database shows the Air Force signed a contract for refuelings at Prestwick in 2016, before the Trump administration entered office. In addition, Air Force planes made many stops at Prestwick before Trump. According to information provided by Air Force officials, planes stopped at Prestwick 95 times in 2015, 145 times in 2016, 180 times in 2017, 257 times in 2018, and 259 times through August 2019

Some of the flights were documented on YouTube. There are hobbyists who like to make and post videos of planes landing and taking off at various airports around the world. A search for “USAF” and “Prestwick” yields lots of videos of Air Force planes at Prestwick, many of them dating from before the start of the Trump administration. (Hereis one.)

So the stop at Prestwick might have been a first-ever for the crew described inPolitico, but not for the Air Force overall. In a statement released after thePoliticoreport, the Air Force said there are a number of reasons for using Prestwick:

Air Force mobility aircraft, primarily C – 17 s, have increasingly leveraged Prestwick as a stopover location between 2015 – 2019 due to several key factors. Prestwick’s 24 – hour-a-day operations make it a more viable option for aircraft traveling to and from the US Central Command Area of ​​Responsibility compared to other military stopover locations that have imposed increasingly restrictive operating hours. Additionally, Air Mobility Command [AMC] issued a flight directive to mobility crews in June 2017 designed to increase efficiencies by standardizing routing locations, with Prestwick being among the top five locations recommended for reasons such as more favorable weather than nearby Shannon Airport, and less aircraft parking congestion than locations on the European continent that typically support AMC’s high priority airlift missions. By considering factors like these to save costs and increase operational efficiencies, Air Operations Center contingency planners have increasingly turned to Prestwick to develop route plans for lower priority contingency needs such as training, deploy / redeploy and Guard airlift missions.

In summary, the Air Force said that, besides its geographic location, Prestwick is a good choice because it “has a large parking area, is open 24 / 7 / 365, and has been contracted by DoD for fuel at standardized prices. “

As for lodging, the Air Force noted that there were 40 overnight says in 2015, 75 stays in 2016, 116 in 2017, 208 in 2018, and 220 Through August 2019. It did not specify how many were at Turnberry. (Indeed, on the single trip mentioned by Politico, the crew stayed at a Marriott on the way home from Kuwait.) Nevertheless, there is some public information about government employee stays at Turnberry.

In July 2018, President Trump visited Turnberry. After the trip, three Democratic lawmakers – Rep. Elijah Cummings and Sens. Tom Carper and Elizabeth Warren – asked the State Department to provide information on how much that cost. It took State nearly a year, but on July 22, 2019, State Department Inspector General Steve Linick responded.

The letter from Linick to Cummings, Carper, and Warren discussed only State Department expenses, which were certainly not all of what was spent on the president’s visit. But it did include information about Turnberry.

During the visit, Linick said, State rented three rooms at Turnberry for two nights. The total cost was $ 728. Citing invoices from the hotel, Linick said the room rate for the night was 95. 06 pounds, or $ 121. 40, per night. Linick said the State Department looked at other hotels, including the Blythswood Square Hotel in Glasgow, which charged 215 pounds per night; the Hilton Glasgow, which charged 249 pounds; the Hilton Glasgow Grosvenor at 229 pounds; the Grand Central Hotel in Glasgow at 185 pounds; and the Raddison Blu in Glasgow at 179 pounds per night. Other State Department employees detailed to the president’s trip stayed at some of those hotels.

It appears that, at least on the president’s trip, Turnberry was a good deal. Nevertheless, the publicity surrounding the new story appears to have made the Air Force nervous.

In a statement issued in response toPolitico, Air Force Brig. Gen. Edward Thomas noted the overnight refueling stop mentioned in the piece “adhered to all guidance and procedures.” Nevertheless, Thomas said, “we understand that U.S. Service members lodging at higher-end accommodations, even if within government rates, might be allowable but not advisable.” Thomas suggested the problem might be more optics than misuse of taxpayer money: “We must still be considerate of perceptions of not being good stewards of taxpayer funds that might be created through the appearance of aircrew staying at such locations,” he wrote.

There is certainly more to learn about the military’s use of Prestwick and Turnberry. But the bottom line: Did an “odd” refueling stop “line the president’s pockets”? Given what is known so far, that’s a hard accusation to support.
****** 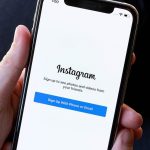 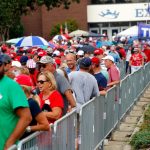