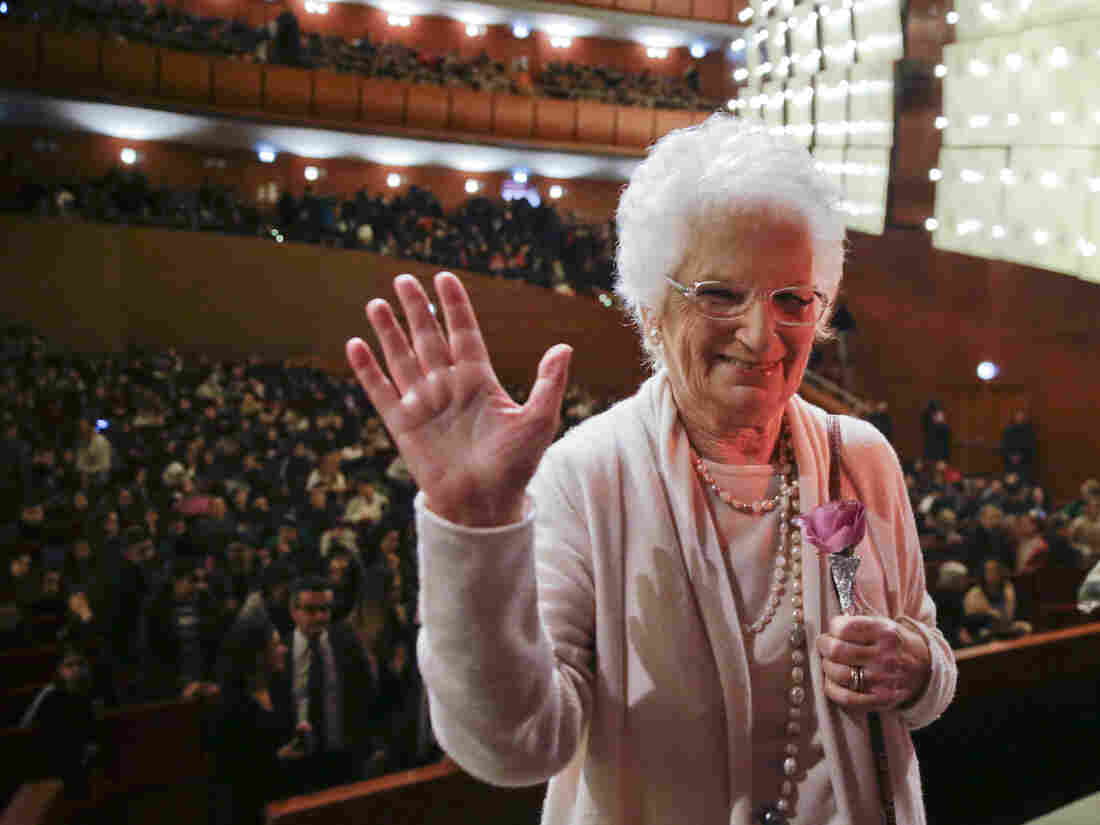 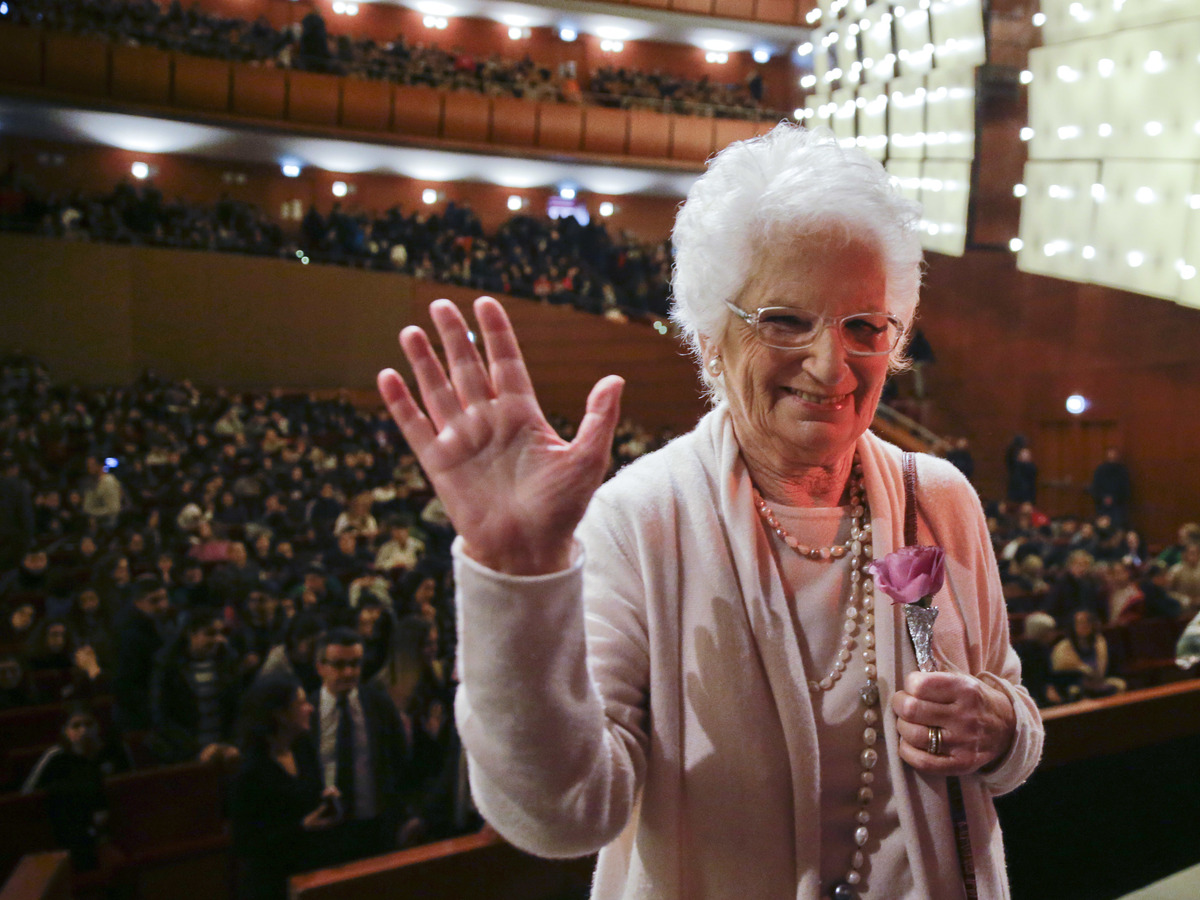 Liliana Segre waves at the end of a meeting with students in Milan, Italy, in 2018. For decades, Segre, 89, was reluctant to discuss her time in the Auschwitz concentration camp. But in the 1990 s, she began speaking to schoolchildren throughout Italy about the Holocaust.

More than seven decades after the fall of fascism in its country of birth, Italy is in the grip of an intense debate about anti-Semitism, racism and hate speech.

The national psychodrama was unwittingly triggered by an 89 – year-old Jewish grandmother and Holocaust survivor who has been put under police escort following threats from members of Italy’s ultra-right.

In 1944, 13 -year-old Liliana Segre from Milan, Italy, was deported to the Auschwitz concentration camp with the number 75, 190 tattooed on her arm. After the war, most people didn’t want to hear about the Holocaust, she says.

When she became a grandmother at age 60, Segre realized she hadn ‘t done her duty to inform younger generations about the horrors of the genocide, and she began to meet with schoolchildren to describe life in the Nazi death camp.

Her work drew public attention, and last year,Segre was named senator for life– an honor recognizing her role in Italy’s historical memory of the Holocaust.

This month, aTV interviewerasked what that meant to her.

“Inside, I was always that little child suddenly banned from going to school and who became invisible to the world around her,” said Segre. “Eighty years later, she becomes senator for life – I can’t find words to describe my emotion.”

But greater visibility made Segre atarget of online anti-Semitic vitriol– some (attacks a day, monitored by theCenter for Contemporary Jewish Documentation. Theinsultsincluded “piece of s *** Jew, “” Hitler, you didn’t do your job well “and” Let’s reopen the ovens. “

Segre responded to the rising nationalistic and anti-immigrant sentiment throughout the country by calling for the creation of a parliamentary committee to investigate hate speech, racism and anti-Semitism. Thevote passed, but all right-wing parties abstained.

Segre told the TV interviewer that she was stunned.

“I thought a proposal against hatred in general, which we are all witnessing, would be an ethical, moral issue,”she said. Instead, she felt “like a Martian in the Senate.”

Ruth Dureghello, president of theRome Jewish Community, says that this is a sign of Italian society’s seven decades of failure in education.

“This is a real crisis for all of us, of all the system, of all the democracy,” she says. “That means that she must be protected from the hate as it was in the past.”

The image of an octogenarian Holocaust survivor needing police protection has evoked memories of intolerance under fascism.Ronald Lauder, head of the World Jewish Congress, warns that Italy must not repeat its past.

“Italy cannot afford to be ripped apart again the way they were in the 1930 s and ’40 s. And the people today don’t remember what happened, “he tells NPR.

The old Jewish ghetto in Rome, where Jews were forced to live for hundreds of years until 1870, is one place where the memory of what happened is very visible. 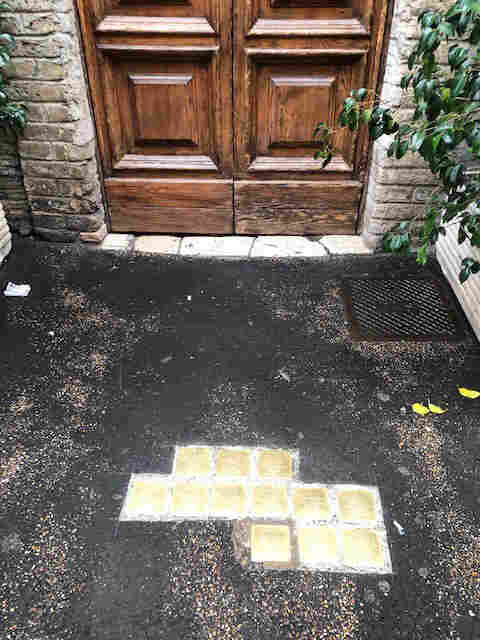 Thousands of Italian Jews were arrested during the Nazi occupation. In front of many doorways, small square brass plaques are embedded among the cobblestones, noting who lived in the homes and when they were killed.

At Number 9 Via del Portico d’Ottavia, there are 12 plaques, known as stumbling stones, bearing each resident’s name, date of birth and date murdered in a Nazi concentration camp. There are two for the Tagliacozzo family and 10 for the Sabatellos. Next door is a kosher restaurant, La Taverna del Ghetto.

Owner Angelo di Porto says what happened to Segre makes him ashamed to be Italian. It’s also, he says, a warning.

“Unfortunately, history teaches us that when Jews are under attack, that leads to persecutions, dictatorships and misfortunes for society as a whole, “says di Porto. “Therefore, non-Jews are the first ones who should be worried about what’s happening here.”

What’s happening includes the refusal by Roberto Canali, the right-wing mayor of Predappio – dictator Benito Mussolini’s birthplace – to participate in an annual program that pays for students to travel by train to Auschwitz. He said it was prompted byhis beliefthat the historical memory of what happened in Europe should be wider.

“When these trains stop to find out what happened atthe foibe[massacre] or at the Berlin Wall and understand the tragedy of 50 years of communism, only then can they say they want to remember history from all 360 degrees, and we’d be happy to collaborate, “the mayor said this month,according to Italian news agency ANSA.

And other incidents includeracist chants and monkey soundsby ultra-right-wing soccer fans, directed at black soccer star Mario Balotelli, who was born in Italy and was adopted and raised by an Italian couple. Luca Castellini, a far-right politician and head of the “ultra” fan section leading the chants,told reportersthis month that Balotelli may be Italian by citizenship, “but he’ll never be fully Italian. “

One person very worried about what’s happening in Italy is Paolo Berizzi, author ofbookson the rise of neo-Nazism and neofascism. Unlike some other countries that had totalitarian regimes, he says, Italy never came to terms with its past. He blames postwar democratic governments for believing that the ideology was dead and buried.

“Fascism can be born or reborn at any time and in any part of the world under new forms, “says Berizzi. “Today’s neofascists don’t wear black shirts. Neofascism expresses itself in new liquid ways, sometimes hard to identify, but in the end, very visible.”

It’s what the late Italian writerUmberto EcocalledEternal Fascism. Eco said it’s up to everyone to point out new forms of fascism as they crop up, put them under the spotlight and thereby defuse them.

That’s exactly what Senator Segre is trying to do.