If the European School in the leafy Uccle suburb of Brussels teaches its high-flying pupils anything, it is how to be diplomatic.

It came as little surprise then that (a meeting) of two of the Eurocrat school’s former pupils offered up broad smiles, oodles of platitudes and reminiscences over shared teachers but also a few gentle but pointed signals as to the hurdles of reaching a trade deal by the end of this year.

European School alumniUrsula von der Leyen( – 1975, the new European commission president, and Boris Johnson ( – 2020) seemingly opened their political relationship on Wednesday in Downing Street with the intention of putting all the nastiness of the last four years behind them.

In contrast, Theresa May’s first dinner with the commission’s previous president, Jean-Claude Juncker, had led to Brussels briefings that the British prime minister was of another universe.

This time, the consensus was that both sides remained committed Europeans. And for the next three months, at least, before the negotiating positions are set, and the talks start in earnest, this is how both sides want the mood music to stay. But the faultlines are clear.

She spent the first years of her life in Brussels, where her father was serving as a commission official. She studied economics at the universities of Göttingen and Münster before attending the London School of Economics where she used the pseudonym Rose Ladson because she was seen as a potential target for West German leftwing extremists.

As commission president, Von der Leyen will represent the EU on the world stage, and her key tasks include building a working relationship with Donald Trump’s White House, and dealing with the next stage of post-Brexit trade negotiations with the UK. 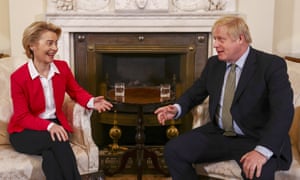 In reality, there is little doubt in Brussels that the prime minister will stick to his guns. There is the option for the EU itself to ask for an extension but if, as is likely, this does not happen then the political declaration offers clues as to the areas to be prioritized.

By the end of June the EU will need to unilaterally decide on equivalence in 34 areas in the financial services sector to allow the City to operate largely as it does today for EU clients.

No non-EU country has been deemed to be equivalent in all those areas, and it is a precarious level of access to the European market that can be snatched away. It is a suboptimal position but the government appears relaxed about it. The outgoing governor of the Bank of England, Mark Carney, has also suggested that there is little to be gained in the City being a rule-taker.

Of greater political salience, despite its much smaller economic significance, is the issue of access to UK fishing waters. The political declaration obliges both parties to employ their “best endeavors” to reach agreement. The large European fishing nations insist on their historic rights of access. The threat to close off the European market to UK fish and seafood looms in what senior EU diplomats warn will be a “horrendously complex and fraught” negotiation.

On the other side, British fishermen want radical change from the common fisheries policy under which nearly 96% of fish in UK waters is caught by EU-based boats. Some, whether in Grimsby or Brittany, will inevitably be left feeling betrayed. The talks are expected to go beyond the summer.

On trade in goods, Von der Leyen made it clear that the current business models for the car and pharma industries would have to change. A gamut of checks and paperwork will be required once the UK is outside the single market and customs union, disrupting the frictionless flow under current agreements. But Von der Leyen repeated her intention to agree a “zero tariff, zero quotas” deal. The price for that is agreement on a level playing field for British and European businesses, ensuring the UK does not undercut the bloc in environmental, labor or social standards, and continues to apply state aid rules.

Johnson said he would not “align” the UK to EU standards. That commitment will be unpacked over the coming months. EU officials say the prime minister’s

European School pupils are apparently taught to be creative thinkers – much will depend on it.