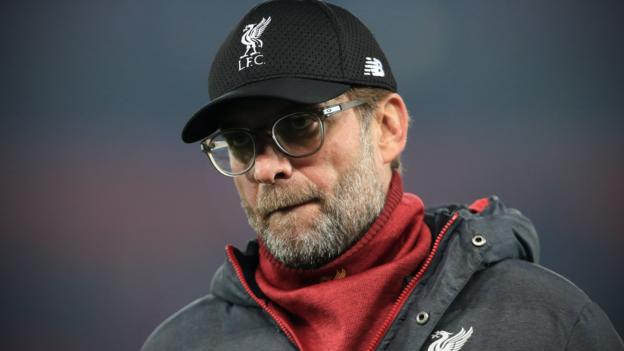 Jurgen Klopp says “we cannot carry on like this” after it was decided his Liverpool side will play two games in two days in December.

The Reds face Aston Villa in the Carabao Cup quarter-final on (December) before playing the Club World Cup semi-final in Qatar the next day.

“We have to find solutions,” said Klopp. “The problems are obvious.

” Every year we do the same again. Some find it funny – ‘five games in three days – let’s see how it works out’. “

From 23 November to 2 January, Liverpool face a testing period of 12 games in 37 days across three competitions – the Premier League, Champions League and Club World Cup – with an FA Cup third-round tie still to be determined in the first week of 2020.

Last Friday, Klopp had ruled out the possibility of fielding two different Liverpool sides in two competitions in two continents, but a club statement on Tuesday said although it was “not an ideal scenario” the outcome was reached in the “best interests of the competition”.

The EFL confirmed the date for the last-eight tie against Villa would be kept following a “request from the club”.

Speaking after goals from Georginio Wijnaldum and Alex Oxlade-Chamberlainearned the Reds a 2-1 Champions League victory over Genkat Anfield, Klopp said: “Do we want to be in trouble with Fifa or the EFL? Probably not and we respect the competitions.

“The Carabao Cup makes it sound like we don’t want to play in it but that is not true but I don’t understand two games in the semi-final, that I don’t like in a busy period of the season.

“The Club World Cup you only play if you win the Champions League and that does not happen in your life five million times so you take that opportunity. Is it the best time of the year? Nope. We will go there, we will try to play all the games with what we have and all that we have. “

In 2016, a weakened Liverpool side faced West Ham in an FA Cup fourth-round replay but lost the game 2-1 after extra time on 9 February.

The Reds already had the Carabao Cup final against Manchester City set for 28 February, but had they progressed in the FA Cup, would have had to play their fifth-round tie on 20 February, as well as having a Europa League game three days before the final.

Klopp pointed to this previous fixture congestion, saying: “You should think about these things before you start because the Carabao Cup is not the only problem we have.

“If you have an FA Cup replay – which I do not like – and go through into the Carabao Cup final, we had a situation a few years ago when we played at West Ham and everyone was in front of the TV watching the FA Cup and hoping we do not go through [because of fixture congestion].

” You cannot work like this where we hope that somebody will go out and everything will be fine. We try to ignore that this timewith Arsenal[on 30 October, a win on penalties after a 5-5 draw] but the boys just wanted to play football.

“We cannot carry on like this, come on. We have to sit down on the table and at one point we have to find solutions. The solution so far are more problems. “

Asked how it will work logistically and who will manage which team, Klopp joked:” We will ask Aston Villa if they can come to Qatar and we can play the game there. “

(Two games in) hours – can fans do both?

Liverpool fans who turn out at Villa Park have two flight options that would give them a chance of making kick-off in Qatar.

A flight from Birmingham Airport at 07: 50 GMT on 18 December lands in Doha at 17: 30 local time, leaving three hours to get from the airport runway to the stands at Education City Stadium.

The cost of that flight was £ 614 one way at 22: 00 GMT on 5 November. The journey from airport to stadium is around 30 minutes, so with a smooth progress through security, getting to both games looks possible.

When fixtures pile up …

In April, Venezuelan club Deportivo Lara played two matches in the space of six hours – one of which was in the Copa Libertadores – and won

On the same day, Venezuelan side Zamora played two fixtures 4, 00 0 miles apart, losing 4-0 at Deportivo La Guaira in the league and 3-2 at Brazilian side Atletico Mineiro in the Copa Libertadores.

Arsenal and Manchester United played on consecutive days in November 2001. The Gunners lost 4-2 to Charlton in the Premier League on 4 November and on the same day United were beaten 3-1 by Liverpool at Anfield, also in the league.

On 5 November, Arsenal beat United 4-0 in the League Cup.

And in November 1987, striker Mark Hughes played for Wales and Bayern Munich in two countries on the same day.

After playing for his country, Hughes recalled: “There was a Lada to whisk us off after the match. had to get changed into my kit on the plane. “