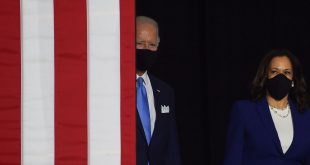 Harris and Sen. Elizabeth Warren (D-MA) clashed at Tuesday’sDemocratic debatewhen the California senator tried to push her Massachusetts counterpart to call for the president’s Twitter account to be suspended.

“Here we have Donald Trump, who has 65 million Twitter followers and is using that platform as the president of the United States to openly intimidate witnesses, to threaten witnesses, to obstruct justice, and he and his account should be taken down, ”Harris said. She pointed to themanifestoreleased by the mass shooter at an El Paso, Texas, Walmart in August, which mirrored some of the president’s rhetoric about immigrants. **********

“I don’t just want to push Donald Trump off Twitter. I want to push him out of the White House, that’s our job, ”Warren replied.

She tried to expand the conversation to a broader one about the power tech companies wield and her proposal to break up some of the major players, and she used the occasion to talk about herlatest pledge not to take money from tech executives, which multiple candidates, including Harris, have made. But Harris kept at it, encouraging Warren to say it’s time to oust the president from Twitter.

“It seems to me that you would be able to join me in saying the rule has to apply to Twitter the same way it does to Facebook, “Harris said.

“Look, I think all of the rules should apply across the board. I don’t have a problem with that, ”Warren replied.

Calls to suspend President Trump’s Twitter account aren’t new. Multiple people and entities have made arguments for kicking the president off of the platform, saying that his tweets violate Twitter’s terms of service or include racist and violence-inciting attacks. Harris has been prodding the San Francisco-based company to make the move for weeks, in light of the president’s tweets regarding the Ukraine whistleblower and impeachment inquiry.

And beyond Harris, there have been questions about what Twitter should do about Trump’s communications on the platform since, essentially, the start of his presidency. On the one hand, he is the president of the United States, and his tweets are newsworthy. On the other hand, his tweets can be dangerous and could potentially incite violence.

Twitter and other tech companies are increasingly under scrutiny regarding many of their business practices, including content moderation. The issue is only likely to heat up moving forward, including as the 2020 Election approaches.

But ultimately,Twitter gets to decide what speech it does and does not allow – it’s a private company and doesn’t owe anyone free speech rights. It also doesn’t have to do what politicians or outside groups tell it.

Kamala Harris’s push to get Trump off Twitter, briefly explained

Harris started encouraging Twitter to oust Trump in late September, and she’s kept it up since then.

On October 1, she sent a letter to Twitter CEO Jack Dorsey saying that the president had engaged in activity that “appears to violate the terms of the user agreement that your company requires all users on the platform” and encouraged him to take punitive action. She pointed to the president’s tweets calling the Ukraine whistleblower a “leaker,” “spy,” or “partisan operative,” and arguing he deserves to “meet my accuser.” She also highlighted tweets attacking House Intelligence Committee chair Adam Schiff (D- CA) and suggesting removing him from office would cause a civil war.

…. If the Democrats are successful in removing the President from office ( which they will never be), it will cause a Civil War like fracture in this Nation from which our Country will never heal. ”Pastor Robert Jeffress,@ FoxNews

“I believe the President’s recent tweets rise to the level that Twitter should consider suspending his account. Others have had their accounts suspended for less offensive behavior, ”Harris wrote. “And when this kind of abuse is being spewed from the most powerful office in the United States, the stakes are too high to do nothing.”

Vox’s Matt Yglesiaswrote at the timethat Trump’s Twitter tirades revealed a “dangerously unfit president” on a “nonstop Twitter binge, lying about what’s going on in Congress, lying about what happened in Ukraine, and escalating his inappropriate conduct by threatening the country with a civil war and threatening his enemies in Congress with criminal charges. ”

But does that mean Trump should be kicked off Twitter? Not everyone agrees.

Well before Tuesday’s debate, a reporterasked Sen. Warren whether Trump should be banned from Twitter. She chuckled and responded, “No.”

Harris confronted Warren over the matter at Tuesday’s debate. That the California Democrat would try to take on Warren,now a 2020 frontrunner, on something during the night was inevitable – multiple other candidates undertook similar maneuvers. Harris did get some flak from observers for harping on this specific issue, though – whether Trump should be allowed on Twitter felt to some like a relatively small matter in the grander scheme of the debate.

Kamala Harris going after Elizabeth Warren on banning Trump from twitter is one of the more Pathetic stunts I’ve seen in a debate.

Others, however, defended her.

I am sorry if you are Latino you don’t think this is trivial. There is fear in my community after El Paso, we can’t blend in when Trump calls us out. So he weaponized his twitter account, she wants to take away that weapon# demdebatehttps://t.co/T 45 zqlsASj

Specifics of the Harris-vs.-Warren debate aside, there have long been questions about what to do about the president’s Twitter habits. Trump actuallysaid he would give up tweeting at one point during the 2016 election, and he, well, hasn’t.

Some of the tweets are funny. (Remember “covfefe, ”anyone?)Some of the tweets are market-moving. And they can also have real-world, and at times very serious, implications. Over the summer, Trump released a series ofracist tiradesagainst the so-called “Squad,” a group of four freshman Democratic members of congress who are women of color: Reps . Alexandria Ocasio-Cortez (D-NY), Rashida Tlaib (D-MI), Ilhan Omar (D-MN), and Ayanna Pressley (D-MA). In one series of tweets, he said that the women should “go back and help fix the totally broken and crime infested places from which they came.” Three of the women were born in the United States, and all four are US citizens.

Trump’s attacks sparked concerns that his words could inspire violence against the lawmakers, andHouse Democrats took a vote to condemn the tweets. Trump’s rhetoric about his opponents has inspired violence before: Cesar Sayoc, the Florida man whomailed pipe bombsto the president’s opponents and critics in 2018, was apparently inspired by the president’s words.

Twitter has generally held that the president’s tweets merit keeping up, even if they are bad. (In a) blog post, Twitter laid out its stance on messages from world leaders. “Blocking a world leader from Twitter or removing their controversial Tweets would hide important information people should be able to see and debate,” the company wrote at the time. “It would also not silence that leader, but it would certainly hamper necessary discussion around their words and actions.”

Ahead of the debate, Twitterreiterated its stance, noting that it aims to be a forum for people to be “informed and to engage their leaders directly.” The company pointed out that in June itrolled out a new policythat amounts to basically a Twitter jail for world leaders – if a public figure puts out a questionable tweet, it will put a warning on it and make it harder to find – and listed out areas where it would take enforcement action on anyone, including politicians: promotion of terrorism, threats of violence, posting private information or intimate photos, engaging in child sexual exploitation, or encouraging self-harm.

But, Twitter emphasized, in other cases involving world leaders, it will “err on the side of leaving the content up if there is a clear public interest in doing so. ”

Harris isn’t alone in calling for Trump to be kicked off Twitter. There are multipleonlinepetitionscalling for the platform to oust the president. But the debate is also just a minor part of a broader discussion about free speech, internet platforms, and what responsibilities companies have to police the content they host.

(Under Section) of the Communications Decency Act of 1996, internet companies get a type of sword and shield when it comes to content. They are shielded from liability for content users post on their platforms, but they also get to moderate that content as they so choose. When you hear someone complaining that by censoring a tweet or kicking someone off of Facebook or YouTube, they’re encroaching on their First Amendment rights, that’s not true. The First Amendment prevents the government from depriving people of free speech; it doesn’t apply to private companies. In fact, if the government were to try to tell companies what content to allow, it would probably be violating their First Amendment rights.

There is debate about whether Section 230 has freed up tech companies from too much accountability, especially as scrutiny on Big Tech overall grows. The free internet is what has allowed the online world to flourish since its inception and given birth to some pretty neat stuff. But it’s also been a petri dish for some scary things as well.

And then there’s another layer, specific to the United States and Trump, having to do with social media companies’ efforts to curry favor with the president. Trump, for example,consistently complains that Twitter is intentionally manipulating his particular follower count downward, even though it’s part of a broader effort within the company toward fostering a healthier conversation and clamping down on bots. Dorsey met with Trump earlier this year to try to explain it to him.

Free speech on the internet as a topic of contention isn’t going away, not only when it comes to Trump but really with respect to everyone. Harris may have picked a bit of a small hill to die on during Tuesday’s Democratic debate, but the underlying issues of her argument are very real.