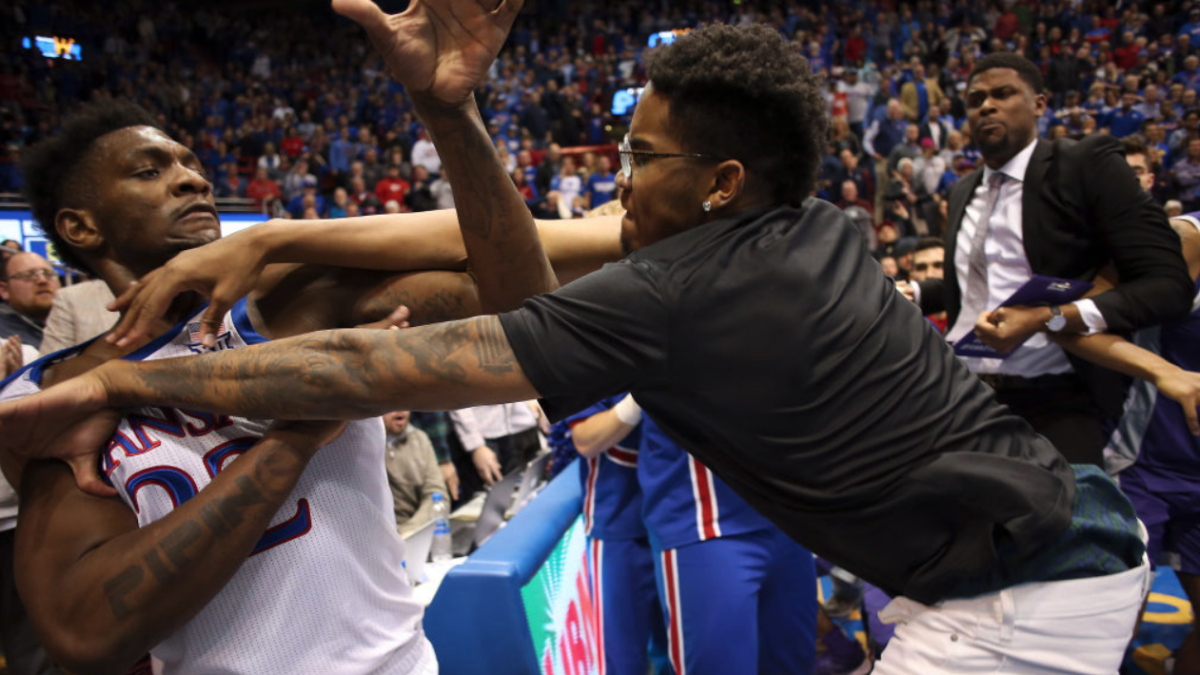 Historic Allen Fieldhouse erupted in pandemonium Tuesday night as No. 3 Kansas was putting the finishing touches on a walloping of rival Kansas State. The bedlam centered around a dust-up-turned-brawl, and players from both teams spilled into the stands. Punches were thrown. Benches were cleared. A chair was lifted as a weapon then subsequently dropped prior to usage. Yes, that all really happened.

In all, one technical was assessed, both benches were ejected, and due to a new NCAA rule, the remaining second left on the clock had to be played out. And so amidst the chaos, they did. Now, you may be asking yourself: WHAT JUST HAPPENED?

I can assure you you’re not alone. Here’s every relevant event before, during and after the brouhaha in the Jayhawks’ 81-59 victory over Kansas State on Tuesday which will not be remembered for the game.

1. DaJuan Gordon gets a late steal

Leading 81-59 and with possession of the ball, Kansas let big man Silvio De Sousa push the ball up the court. With under 10 seconds left, the game was all but officially over, after all. But De Sousa — not a known ball-handler — let his handles get a little too loose. DaJuan Gordon took advantage by scooping the ball from his possession in the corner.

Considering De Sousa’s opportunities as a ball-handler are extremely limited, he took exception to Gordon stealing his shine. His chance to run out the clock as the point guard was squandered. De Sousa could have trotted back, maybe even lollygagged back near midcourt. Instead, he beelined directly towards the rim in an attempt to make Gordon pay. And pay Gordon did: De Sousa swatted his shot with extra mustard.

Winning 81-59 is a taunt in itself, but De Sousa decided after the emphatic swat that he’d make sure Gordon knew what just hit him. After meeting him at the rim, De Sousa walked over to Gordon and hovered over him to taunt him. He was assessed a technical by the officiating crew, but by this point, the damage had been done …

As soon as De Sousa began hovering over Gordon, players — both from Kansas and from Kansas State — began a full sprint towards the scene of action. Benches cleared. Coaches followed in an effort to clear their players from the chaos. All that can be seen is a mass assembly of players on the sideline.

You knew it was coming, and here, it arrives: the punches. It’s unclear exactly when this melee begins, but the first on the scene appear to come on the baseline between De Sousa and K-State’s James Love III. Here’s a look from the baseline captured by a photographer with a front-row seat:

Here’s a close-up video of what transpired in the moments thereafter:

6. De Sousa picks up a chair … then drops it

It appeared De Sousa was prepared to go FULL WWE in this mess. After trading a few punches, he stumbled upon a chair, picked it up, looked like he was about to drop someone …

… and then he dropped it. De Sousa looked like he dropped it to go help teammates elsewhere, but other video shows there were patrons trying to pry it from his grasp. Either way, a potential Myles Garrett-like fiasco was avoided with this underrated moment.

7. Self, Jerrance Howard step in

The pic above depicts Howard with arms extended, in an apparent plea to De Sousa to get him to drop the chair. Moments later, he did. Were the two events connected? My bet is yes. Either way, that led to an all-time parent/child photo of Self and De Sousa, with De Sousa looking like he just got caught being out 30 minutes past curfew.

Big Jay — KU’s mascot — is a lover, not a fighter. Er, rather, a hider and not a fighter. Even with all that cushion in this chaos, Big Jay could be seen cowering on the sideline, arms over its eyes, trying to shield its eyes from one of the biggest brawls in college hoops history. I get that a Jayhawk is a bird — but man, what a chicken. 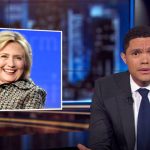 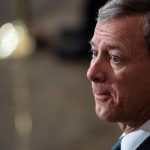