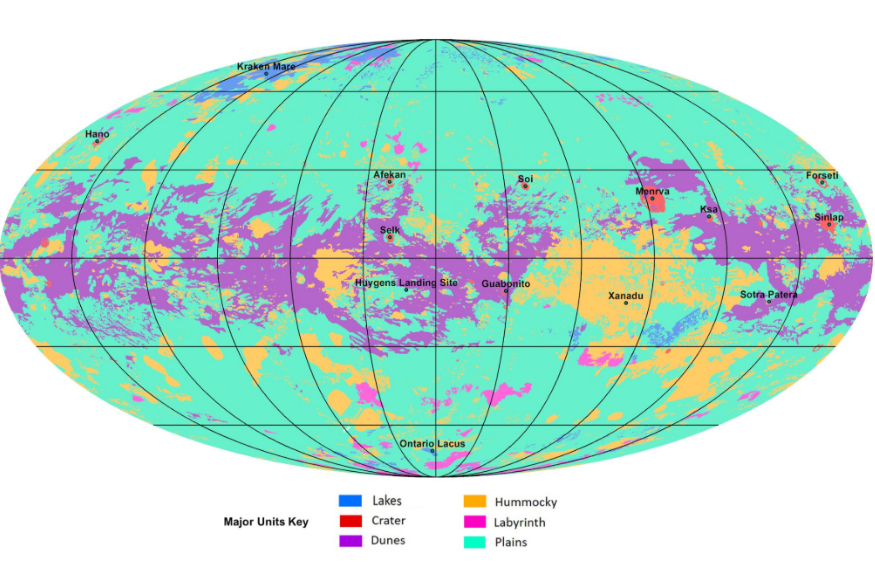 Astronomers from NASA have, now, finally revealed the first geological map of Titan.

The largest moon of Saturn is the only planetary body in the solar system, apart from Earth, that has stable liquid lakes on its surface and dunes that are made up of organic matter.

The study was conducted by Rosaly Lopes, Michaekl Malaska and others, and was recently published in the journal Nature Astronomy.

NASA took to Twitter to announce the news with an image and a caption that read:

“Lakes and labyrinths: the first map showing the global geology of Saturn’s planet-sized moon, Titan, has been completed. It charts a dynamic world of dunes, plains, craters and other terrains. “

Lakes and labyrinths: the first map showing the global geology of Saturn’s planet-sized moon, Titan, has been completed. It charts a dynamic world of dunes, plains, craters and other terrains. See more:https://t.co/dBNxyi5LzFpic.twitter.com/bNMmXIe5iG

Taking to theirwebsite, NASA further added that unlike Earth, water does not rain down from clouds, what rains down instead is ethane and methane, which behave as a liquid in the extremely cold climate of Titan .

Speaking about the map, Lopes, a planetary geologist at NASA’s Jet Propulsion Laboratory in Pasadena, California and the lead author of the study, said that Titan’s active “methane-based hydrologic cycle” makes it one of the “most geologically diverse in the solar system.”

According to Lopes, despite a number of differences in terms of materials, temperature and gravity, a number of similarities between Earth and Titan can be observed in terms of geologic processes.

The map that has been created by them “shows that the different geologic terrains have a clear distribution with latitude, globally, and that some terrains cover far more area than others, “NASA’s website revealed.

To create the map, Lopes’ team used data from NASA’s Cassini mission, in particular, its radar imager to breach Titan’s dense atmosphere of nitrogen and methane. Following that they used data from Cassini’s instruments to capture some of Titan’s larger geographical structures.

The map is based on radar, infrared and visible light data collected by Cassini orbiter that performed 120 fly-bys of Titan, according to the report.

David Williams of the School of Earth and Space Exploration, who was a co-author of the study, explained that the Cassini mission revealed that Titan is a geologically active world where hydrocarbons like methane and ethane take on the role of the water that Earth has.

Get the best of News 18 delivered to your inbox –subscribe to News 18 Daybreak. Follow News 18. com onTwitter,Instagram,Facebook,Telegram,TikTokand onYouTube , and stay in the know with what’s happening in the world around you – in real time.