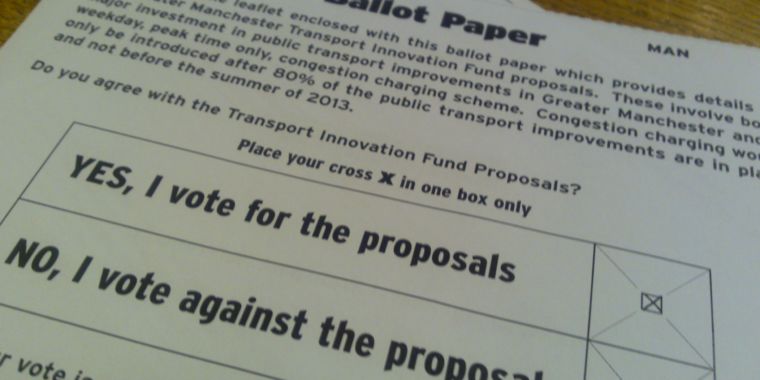 Electoral instability is driven by low voter turn out and high polarization (duh).

Given this model, is it possible for voter opinion to become, essentially, decoupled from election outcomes? Something like this might be the case, according to an overly general model produced by — you guessed it — physicists.

This latest research suggests that, even without the complication of getting messy with reality, election models can produce some alarming dynamics.

Imagine that everyone could summarize their political opinions using a single number. Now, in a rational world, everyone would vote for the candidate whose opinion is closest to your own, meaning their opinion number is closest to your own. In this case, election results are stable. That does not mean that each election result is the same but that the public selects a group of politicians that more or less matches the opinions of the majority of the electorate.

This is a stable election system, where a change of opinion in the electorate will be reflected by a change in the election result that is about the same size (or maybe a bit smaller).

However, we are not rational. Sometimes, the nearest candidate is still too far away from your own opinion. In this case, you might not be bothered to vote. Not voting because of the lack of close representation, it turns out, has deeper consequences than imagined.

Even worse, the presence of negative representation can result in instability. That is, the change in an election result is larger than the change in the opinions of the electorate. What’s more, it does not matter if the non-voters are clumped at one end of the spectrum or evenly distributed — the effect is the same.

Show me the wild elections

We know that there are elements of this in most electoral systems, where a substantial fraction of voters abstain because they feel that no candidate represents them well enough. But in those countries, wild election swings are not observed. So what’s wrong with the model?

The missing ingredients are electorate polarization and low voter turnout. When these are added to the mix, then small shifts in opinion among the electorate can result in large electoral swings. This behavior in the dynamical model is a “phase transition,” and one of those is bad news. When a system undergoes a phase transition, it is very difficult to return to the previous state. That means that if an electorate has entered an unstable regime, it is likely to stay there for a long period of time.

And, yes, you guessed it, the researchers point to the United States as a possible example. They examined electorate polarization and claim that it shows all the characteristics required for instability. Here, in fact, they turned the model on its head. The model predicts that, in the presence of instability, the amount of polarization will increase in a characteristic way. The real-world data supports that contention.

In short, no matter what your political opinion, prepare to be overstressed and depressed by election results for the foreseeable future.