Lowndes County Sheriff John Williams was shot and killed Saturday night while in the line of duty. After about a three-hour manhunt, the 18 – year-old suspect in the deadly shooting returned to the crime scene and surrendered. A gun was taken from him at the time he turned himself in.

The shooting happened shortly after 8 p.m. at a QV convenience store at the intersection of Highway 21 and Highway 97 in Hayneville in Lowndes County. Authorities and Williams ’relatives said the sheriff responded to the store when the owner called lawmen because there was a crowd hanging out in the parking lot and he wanted them dispersed.

ALEA Trooper Sgt. Steve Jarrett and ALEA Secretary Hal Taylor spoke with the media late Saturday night, calling Williams’ death a blow to the law enforcement community. “It’s a very sad time for Lowndes County and the state of Alabama, ” said Jarrett, who said he had known Williams for most of their law enforcement careers.”

“He was a wonderful man, ” Jarrett said. “Everybody in law enforcement knew him. If you ever met him, you’d never forget him. He worked 24 / 7 and was an outstanding sheriff. ”

Williams is the fifth Alabama law enforcement officer killed this year in the line of duty. He leaves behind a wife and children, who were on the scene. “We’re taking good care of them,” Jarrett said.

State Bureau of Investigation agents are on the scene, said ALEA Cpl. Jess Thornton. Also on the scene is Montgomery Sheriff Derrick Cunningham, a close friend of Williams. The Alabama Sheriff’s Association put out a call for all possible assistance and sheriffs from around the state are heading to Lowndes County.

Calhoun County Sheriff Matt Wad was among those who responded to the call for help. “He was as fine a man you’ll ever find. He always had a kind word for everyone, ” Wade said.“ It’s just heartbreaking. ”

“ He was a great friend, ” said Michael Jackson, the district attorney for Alabama’s Fourth Judicial Circuit, recalling a time when Williams drove to Birmingham to pick up Jackson when he was stranded at the airport. “Man, this hurts.”

“ He was a great sheriff but an even better person, ” Jackson said. “He really cared about the Black Belt . He came over to Selma many times to help fight the gang problem. ”

Shortly after 10 pm, the Alabama Law Enforcement Agency issued a Blue Alert for the 18 – year-old suspect, William Johnson is a white male. He is 5-feet, 9-inches tall and weighs 137 pounds believed to be traveling on foot and deemed a serious risk to the public. Johnson was last seen at the QV gas station where Williams was killed.

Just after midnight, authorities said, Johnson returned to the crime scene and surrendered. the Blue Alert at 12 : (am Sunday.)

Johnson is from Montgomery and the son of a law enforcement officer. He was arrested in August on a charge of being in possession of brass knuckles and being a minor in possession of alcohol, but those charges were later dismissed, according to court records.

“I’m saddened to hear about Sheriff Big John Williams, who was tragically killed this evening in the line of duty. Through his service to our country in the USMC and his many years working in law enforcement, he dedicated his life to keeping other people safe, ’’ she wrote. “He will be remembered as a consummate professional and pillar of his community. I offer my prayers and deepest sympathies to his family and the men and women of the Lowndes County Sheriff’s Department. ”

Alabama Attorney General Steve Marshall released this statement: “Tonight, Alabama mourns the loss of another law enforcement officer in the line of duty, ”said Attorney General Marshall. “Lowndes County Sheriff‘ Big John ’Williams died from gun fire while responding to an incident in Hayneville. Sheriff Williams devoted his life to law enforcement. He gave more than 40 years to public safety in his home county , serving the last 9 years as Lowndes County Sheriff. His dedication and experience are irreplaceable.

“Sheriff Williams is the fifth line-of-duty death of an Alabama law enforcement officer to gun fire this year and the sixth to lose his life overall in our state over the last 11 months. Serving the public in the role of a peace officer is a difficult calling, fraught with peril, yet thankfully many Alabama men and women choose to answer the call, often time putting their lives in danger to protect us. It simply cannot be said enough that we owe these heroes our gratitude and our support.

“I know all Alabamians join me in passing along our condolences and prayers to Sheriff Williams’ family and to the Lowndes County Sheriff’s Office.”

“I’m saddened to hear about the shooting death of Lowndes County Sheriff ‘Big John’ Williams, ” said Montgomery Mayor Steven Reed . “A consummate lawman who served his community, he will be sorely missed. Our prayers go out to his colleagues, friends and family.”

“ It’s devastating, ” said ALEA’s Taylor. “Big John was a well-liked guy and the community just needs to come together and support the family during this time.”

Williams was born and raised in Lowndes County and graduated from Calhoun High School in 1976, according to the sheriff’s office website. 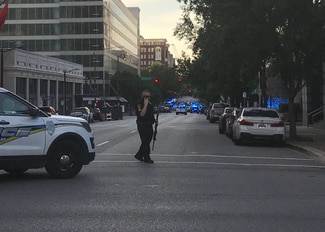 “Sheriff Williams always wanted to make a difference in his community and felt there was no better way to help his community than to protect and serve them in law enforcement, ” reads the bio on the website.

Williams in 1978 started volunteering as a reserve deputy under then Sheriff John Hulett.

(From) to 1990, Williams served as a deputy . In 1990, he was appointed by Sheriff John Hulett to chief deputy and served in this capacity until leaving the department in 2009.

In 2010, he successfully ran for sheriff and was reelected again in 2014 was once again elected.

Williams’ niece, Deardra Pinkett, said the family is devastated. Her husband had worked as a deputy under Williams and they found out about the slaying on Facebook.

Williams leaves behind a wife and two adult children – a son and a daughter. His son was at the store when the deadly shooting happened. Pinkett said the store owner called 911 because there was a large crowd outside that he wanted dispersed.

Pinkett said she’s thankful that the suspect surrendered. “He’s taken someone away from a lot of people,’ ’she said. “I’m glad he turned himself in because it wasn’t going to turn out good for him. So many people were upset. ”

Her uncle, she said, was well-loved. “He was a real people person,’ ’Pinkett said. “He was always helping people.”

His death, she said, was senseless. “Violence is never the answer.”