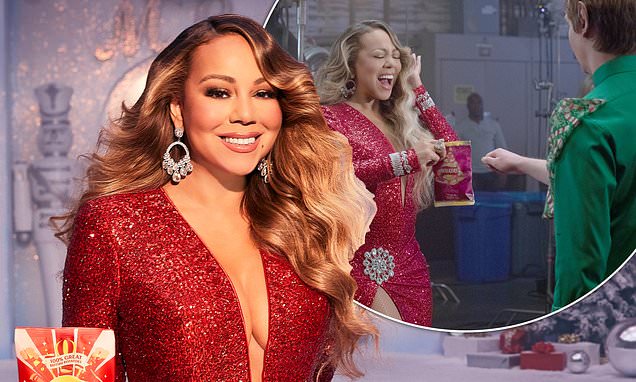 She released her iconic festive song All I Want For Christmas Is You 25 years ago.

And American singer Mariah Carey, 49, is set to mark the anniversary with a hilarious advert after partnering up with Walkers crisps.

In the commercial, which will air on Saturday night but was released on the company’s YouTube channel at midnight, the star will use her high-pitched singing prowess to nab a bag of pigs in blankets-flavored crisps from an elf.

Getting festive: Mariah Carey, 49, will use her vocals to nab a packet of crisps from an elf in a ad with Walkers to mark 25 years since her song All I Want For Christmas Is You was released

The snack company’s festive campaign begins with the singer performing her hit All I Want For Christmas Is You in a wintry music video setting.

Following the shoot Mariah, who is wearing a sparkling red dress with a plunging neckline, walks through the set generously handing out presents to the crew,

These gifts include a framed painting of herself riding a winged unicorn and a box full of doves.

Belt it out: The singer looks sensational in a sparkling red dress as she uses her famous note in the classic Christmas tune to get hold of the last packet of crisps from the elf

Mariah then faces a dilemma as both she and a Christmas elf go to reach for the last bag of pigs in blankets-flavored crisps in a hamper at the same time.

The elf tells her ‘it’s the last bag’, to which she replies: ‘I saw them first. ‘

Following a polite tussle over the snack, Mariah sings her famous high-pitched note to make the elf drop the bag so she can take them for herself.

Feeling kind, she does give the elf one crisp before her generosity backfires in an unfortunate twist.

Christmas time: Mariah’s commercial with Walkers will air for the first time during X Factor: Celebrity on Saturday evening, the company released it on their YouTube at midnight

Mariah, who is thought to be receiving £ 9million for the honor of being in the ad, said: ‘I had a lot of fun filming this commercial with Walkers.

‘I’ve always loved their crisps from my trips to the UK and everyone knows I love feeling festive so it was the perfect collaboration for me – it’s also a great way of celebrating the 25 th anniversary of All I Want for Christmas Is You. ‘

The minute-long advert will have its TV debut during ITV’s the X Factor: Celebrity on Saturday evening.

Wayne Newton, head of marketing at Walkers, said: ‘It doesn’t get more Christmassy than Mariah Carey singing All I Want for Christmas Is You and that’s exactly what’s in our new advert.

Earning a packet: Album Merry Christmas, which features hit single All I Want For Christmas Is You, will be re-released on November 1 (Pictured: Mariah in the track’s video)

‘As well as entertaining the nation with our trademark humor, the campaign brilliantly launches our festive flavors for the season.

‘ This year is one of the biggest yet for Walkers, with our new campaign, limited edition flavors and huge on-pack promotion – we hope consumers will love it. ‘

It is unknown if Match of the Day host Gary Lineker, who has been a regular feature in Walkers commercials since 1995, will star alongside the pop diva when her ad finally airs.

Popular: The video, in which Mariah frolics in the snow with Santa, is a firm favorite with fans

The campaign coincides with the 25 th anniversary of All I Want For Christmas Is You and Mariah’s holiday album Merry Christmas , which has been re-released as a double album with new tracks.

The singer also recently announced her All I Want For Christmas Is You tour, named after her hit Christmas single from the album.

The track has gone on to become a Christmas staple in the holiday period.

The LP, which has sold more than five-million copies in the United States alone, will be re-released on November 1.

In addition to the TV advert, Mariah will appear on packs of Walkers crisps across its core range of flavors, as well as on point of sale in shops and on digital channels in the countdown to Christmas.

Wayne Newton, head of marketing at Walkers, said: ‘Our seasonal range of flavors – from Pigs in Blankets to Brussels Sprouts – has just been reintroduced to shelves, and we know the nation is already feeling festive as a result.

Surprise: Of her decision to sign up with Walkers, Mariah admitted she was already a fan of the crisp giant and their wide range of flavors before agreeing to the rather unlikely collaboration

‘But with Mariah on board too, our Christmas spirit has just stepped up a gear.

‘ It doesn’t get much bigger than working with a global superstar like Mariah and it’s been a big secret for us to keep – but we can finally announce that the rumors are true … the Queen of Christmas herself will be the star of our biggest ever Walkers Christmas advert. Keep your eyes peeled in the upcoming weeks for the ad. ‘

Sports broadcaster Lineker has been the face of the snack brand for more than two decades. Earlier this year it was announced that actress Emily Atack will also promote the crisps.

In 2015 Bolton based baking firm Warburtons encouraged Sylvester Stallone to re-enact some of his most iconic roles in one of their adverts.

Astonishingly, the company managed to go one step further in 2018 by securing the services of screen icon Robert De Niro , who spoofed his famous gangster persona in another comical ad.

Mariah’s commercial with air on TV for the first time on Saturday night. 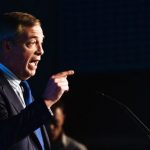