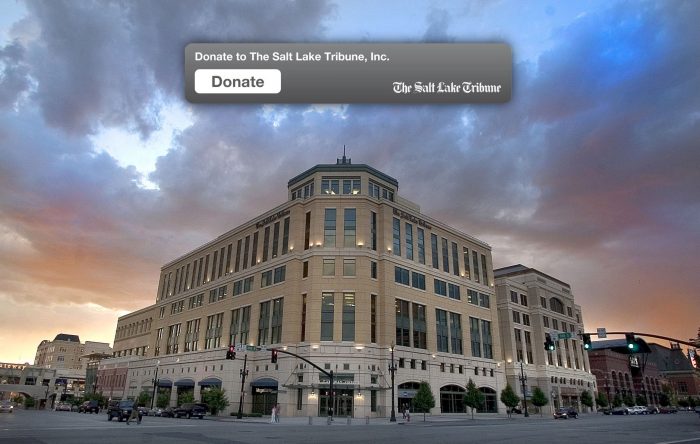 It’s a big step for Salt Lake City – but also a major opening for other newspapers who might find nonprofit status a more appealing alternative than selling or closing down.

It was a “happy surprise,”Fraser Nelsonsaid, whenThe Salt Lake Tribunereceived a letter from the IRS on Friday giving the 148 – year-old news outlet nonprofit 501 (c) (3) status – no questions asked.

A final verdict on whether the Tribune could becomethe first legacy newspaper in the U.S. to go fully nonprofitwasn’t expected until early 2020, Nelson (vice president of business innovation) andJennifer Napier-Pearce(editor-in chief) told me. It had received approvalfor the parallel Utah Journalism Foundationa few months ago – also with no questions, but that was a more straightforward request. This approval opens the doors for many more commercial legacy newspapers to seek tax-deductible status and philanthropic funding – a potential lifeline for local news outlets whose owners agree to give up control.

“We argued that our business will not change and we will continue to support the community that we serve and left it open to interpretation,” Napier-Pearce said. “We figured if they do go ahead with it, our circumstance is not going to match the circumstance of local newspapers around the country. We wanted maximum flexibility so other people could tinker with this recipe for their particular needs. Our argument is we’re already doing the work of a nonprofit. We should qualify for that tax status. ”

“Without a lot of feedback from the IRS, we’re grateful that we have a pretty blank slate,” Nelson said. “We want to make sure we’re making decision that make sense for us as an institutions, make sure they are in context of the larger national – what this means for other papers and for journalism generally.”

(They asked me to share thedonate link, which will probably become very familiar to Tribune readers once the paper figures out some infrastructure questions. The Tribune also receivedfundingfrom the Google News Initiative to work on these items last month.)

The Tribune announced the news this morning, just five months after it submitted its application to the IRS. (I reached out to the IRS for comment and will update if I hear back.) In June, weunpacked the various hoopsthe application would have to jump through with Nelson and media law expertJeff Hermes, such as:

“Are you using commercial revenue streams such as advertising or subscription fees without attempting fundraising? ”

The Tribune had offered up advertising as unrelated business taxable income to the IRS, meaning that it would be outside the purview of their tax deductibility, but the IRS didn’t issue any instruction on how to treat it. Subscriptions may become tax-deductible, but Fraser said they’ll have to figure out if that status would vary between digital and print subscriptions (since a print edition involves more business operations, like printing and distribution). So for now, TBD.

But the nonprofit newspaper will be able to attract a new mix of revenue streams, reliant on philanthropic giving, smaller donations from readers and supporters, and the endowment of the separate Utah Journalism Foundation. (Nelson said earlier this year that they were aiming to raise $ 60 million she that she said she couldn’t share anything about the amount raised thus far. UJF grants will also go to other Utah news organizations besides the Tribune.)

Reminder: “Nonprofit” doesn’t mean “no business plan.” Nonprofit journalism in general has seen anremarkable boom over the past ten years, but the outlets still need to invest in their business and fundraising operations to sustain the editorial operations.

“We’ll be forthcoming about where that is but one thing that’s really important is to stress again that the purpose of this foundation is to help sustain The Salt Lake Tribune in perpetuity but also to make sure that we’re doing as good a job as we can with promoting and supporting independent journalism in the state, ”Nelson said.

The Tribune also needs to detangle itself from its business relationship with the other Salt Lake newspaper, theChurch of Jesus Christ of Latter-Day Saints– ownedDeseret News. They’re currently part of ajoint-operating agreementthat strongly favors the Deseret News and will expire next year. “We’ll need to figure out what our relationship looks like, if any, going forward. But these are all really good things to deal with and to noodle over, ”Napier-Pearce said.

With this change, Salt Lake City will be home to what must be the least commercially oriented local news scene in the country – two daily newspapers, one owned by a church, the other run as a nonprofit. )

“Are you engaged in political activity?”

As part of this shift, the Tribune editorial board will officially step back from endorsing candidates, which publisher and owner Paul Huntsman had seemed thrilled to give up earlier this summer. (Yes, he is ofthe Utah Huntsmans.) The editorial cartoonistPat Bagleywill remain, as will the Tribune’s sports analysis and regular newsroom operations . “The integrity of our reporting and our values ​​as a news organization won’t change, but we will engage with the community in new ways and ask for their support,” Napier-Pearce said in theannouncementMonday.

She added to me: “We are very much a community newspaper, so our focus will always be on Utah. We’ve really changed the way we look at and define news just because of limited resources… It’s really going to depend on the generosity of our donors and the community coming together and see what we can do. My ultimate hope is to expand the newsroom, replace the reporters that we are sad we had to let go, and start to rebuild. ”(The Tribune laid offmore than a third of its newsroomlast year.)

Over the summer, the Tribune held focus groups and is planning a listening tour to talk with its audience more directly, Nelson said.

But “political activity” – a no-no for 501 ( c) (3) s – can mean more than just election-time endorsement slates, Hermes had warned in June; this is the kind of item that can be very curiously interpreted. He emailed me his take Monday morning:

It remains possible, for example, that the subjects of a newspaper’s coverage – particularly political figures who are displeased by stories perceived as negative – could complain to the IRS that the paper’s reporting runs afoul of the candidate endorsing rule even though the paper does not make formal endors. It is worth noting that the “endors” rule is not limited to formal endors; rather, the rule in question prohibits “participat [ing] or interven [ing], directly or indirectly, in any political campaign on behalf of or in opposition to any candidate for public office.” Treas.Reg. ( (CFR) (c) (3) -1 (c) (3) (iii). We are in untested waters with respect to how these rules apply to a nonprofit newspaper with robust political reporting. Perhaps a court would consider this “indirect intervention,” or perhaps not; it would at any rate involve a highly fact-specific inquiry based on the nature of the coverage.

(That said, while no nonprofit newspaper has engaged in “robust political reporting,” plenty of other nonprofit news outlets – The Texas Tribune, ProPublica, the Center for Public Integrity, and so on – have done plenty of work that has impacted the fates of candidates and campaigns. We’ll see.)

“Is your ownership ready for this?”

Huntsman, publisher and owner since 2016, seemed very ready inhis note to readers Monday morning, referring to the market failure of local journalism: “I will not be held hostage to a broken system.”

Huntsman – part of a powerful local family, deeply embedded in the community, wealthy outside his newspaper holdings – is the most obvious sort of owner to be interested in nonprofit status. Local newspapers are currently fighting to build a profitable and commercial future, of course. But one could imagine, if their newspapers’ financials get substantially worse, that owners likeJohn Henryin Boston,Glen Taylorin Minneapolis,Warren Buffettin Omaha,the Blethensin Seattle, or maybe eventhe Decherdsin Dallas could see this as a path forward. It could be even more of a boon to smaller newspapers, dailies and weeklies, which are more likely to still be locally owned.

That said, don’t expect much interest from the nation’s big newspaper chains, which own an ever-growing share of the newspaper landscape.

Control of the Tribune will now go to the board of the nonprofit (separate from the board of the Utah Journalism Foundation, which will focus on fundraising) and supported by several advisory committees. There’s a placeholder board for now, Napier-Pearce said, since the approval just came through; but they hope to develop a board “that reflect who we are as Utahns. We also want experts from the industry to step forward. I don’t know exactly what the makeup is going to look like, but it will be very different six months from now, ”she said.

There’s a lot to be determined. Will the new revenue enabled by nonprofit status be a game-changer or a trickle? If the mission is more squarely about journalism and community service now, does that speed up an end to print? (It’s a huge cost item in newspaper budgets, but it’s also still a huge driver of revenue.) How will the IRS respond to any challenges to the new status? Will there set off be a flood of outlets rushing to get tax-deductible funding?

The news took Media Twitter by happy surprise as well:

Congratulations to the@ sltrib, which did what I honestly thought it couldn’t : convince the IRS to let it convert from a for-profit to a nonprofit businesshttps://t.co/SsuVGt2COD

The Salt Lake Tribune, a daily newspaper there, becomes a non -Profit 501 (c) 3. That’s a big deal. Not a commercial business owned by a foundation or school, like some newspapers are, but its own non-profit.https://t.co/aFOFkM4Zwt

Huge news in local news:@ sltrib‘s non-profit status has been approved by the IRShttps: / /t.co/4JhLG9rxg8

Back in 2012 it wasn’t clear the IRS would allow nonprofit journalism to exist, and today it has endorsed a major metro daily newspaper converting to nonprofit status. That is a huge endorsement of the value of and need for nonprofit news as a core part of American democracy. / 2

Note how the@ sltrib‘s owner Paul Huntsman uses the term’ community institution ‘to describe the paper. I think that idea will be put to the test here in an interesting way.https : //t.co/HLQwmJDHX4

STOP THE PRESSES. LITERALLY,@ WarrenBuffett. They did it. Congrats, Salt Lake!https://t.co/X4KbVk9Wnc

I know I already tweeted this story. But I’m still so happy about it. It was fun to walk into the newsroom and see the reaction this morning.
In historic shift, The Salt Lake Tribune gets IRS approval to become a nonprofit, via@ sltribhttps: // t.co/qqEPtauuUm 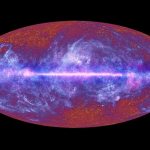