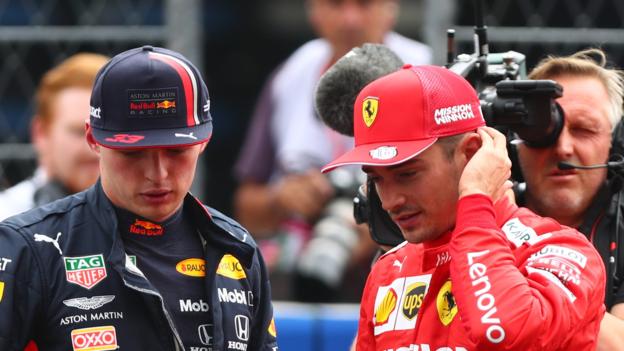 Red Bull’s Max Verstappen has been demoted from pole position at the Mexican Grand Prix by a penalty for ignoring warning flags.

The Dutchman was given a three-place grid drop and will start fourth, behind Ferrari’s Charles Leclerc and Sebastian Vettel and Mercedes’ Lewis Hamilton.

Verstappen failed to slow down for yellow caution flags after a crash by Hamilton’s team-mate Valtteri Bottas.

The error cost Verstappen pole, as his first lap was also faster than anyone else’s.

In front of him, Vettel had slowed down for the flags, a decision that he believed cost him a shot at f astest time.

Verstappen’s quickest lap beat Leclerc by 0. 266 seconds – and his first run was 0. 114 secs faster than the Monegasque.

Hamilton, who will win the championship on Sunday if he finishes 14 points ahead of Bottas, starts third, with Red Bull’s Alexander Albon still fifth but now right behind his team-mate.

Hamilton improved his overall lap time on his final run, on which he was running behind Bottas and passed his crashed car, but crucially he did not go faster in the final sector – in fact, he slowed down.

And Vettel expressed his dismay at the turn of events as he saw the flags, saying over the radio: “You’re kidding me. That was going to be a good lap.”

Later, Vettel said of the incident: “For me it was clear it was double yellow. I saw Valtteri was in the barrier, people were jumping on the track to help. had to lift. “

Initially, stewards did not investigate the incident with Verstappen, even though television pictures showed him passing a yellow flag and Bottas’ car without slowing down.

But after he admitted in the news conference that he was “aware Valtteri crashed “but did not slow down, he was summoned to see the stewards.

Bottas crashed as he ran wide out of the final corner trying to make up time, sliding into the barriers and causing considerable damage to his car. The Finn was released from the medical center after a precautionary check-up.

It was a blow for the Finn as he tries to prevent Hamilton putting the championship out of reach. But starting third, it is still a big task for Hamilton to make as much of a gain on Bottas as he needs to clinch his sixth title.

Hamilton needs to finish on the podium at least and hope Bottas’ results go his way.

Hamilton’s job would be made a lot easier if Bottas has to take a grid drop, but team boss Toto Wolff said he was “90% confident” the car could be repaired without incurring penalties.

How Hamilton can win the title in Mexico

Had he not been penalized, pole would have been only the second of Verstappen’s career, after his first in Hungary in August.

Ferrari were expected to be unbeatable in qualifying in Mexico because of their formidable straight-line speed, but the track also rewards high downforce because of the thin air at an altitude of more than 2, 000 m.

In the end, Red Bull’s aerodynamics cancelled out the low-drag of Ferrari’s car and higher power of its engine. The Honda engine’s need for relatively small changes to its cooling requirements in the thin air was also a factor, Verstappen said.

Vettel said: “I had a mistake on my first run and I was quite confident on the second I could make up for it but there was a double yellow so I had to slow down.

“I would like to have been further up but we have the speed and it is a long race. It will be a tough one on brakes and cooling in general, and on the tires out will be quite an adventure. I am looking forward to it. “

Hamilton said:” I think third was possible but I am generally happy with today. It was hard to keep up with the others. We knew it would be difficult here. I gave it everything and I think I am in a fighting position (for the race). “ 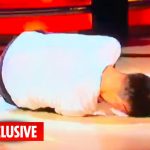