Mohammed Bin Rashid: A plan of 50 goals for Dubai over the next five years 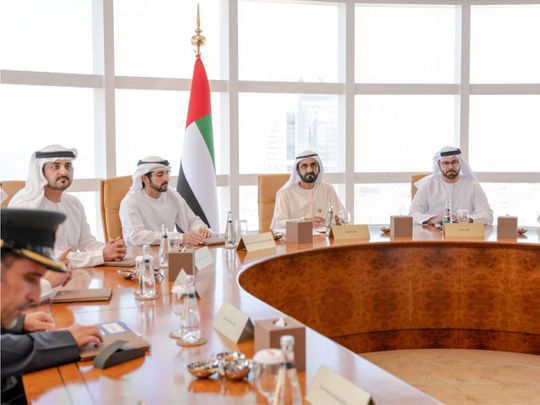 Dubai: : His Highness Sheikh Mohammad Bin Rashid Al Maktoum, Vice-President and Prime Minister of the UAE and Ruler of Dubai, on Tuesday chaired the first meeting for Dubai Council during which he approved a five-year plan containing fifty goals for Dubai.

“The goals of the plan, which will be announced in 60 days, will be included in the performance agreements of general managers. What we announce will be implemented by the team … Otherwise, the team will be replaced,” Sheikh Mohammad tweeted.

Sheikh Mohammad said: “Today, we have approved a new system for the governance of the government and semi-government companies under the supervision of Maktoum Bin Mohammad. Accordingly, these companies will have to form boards of directors as a supreme authority. The new system prevents the CEO from assuming the chairmanship of the board and obliges the boards of directors to form committees to evaluate investments, manage risk and submit annual performance reports to the government”.

“We also decided to start immediately with developing a new urban plan for the emirate. We will lay out a quality of life map for Dubai to ensure that Dubai is the best city to live in through providing the finest facilities for the best city in the world”, the Vice President tweeted.

He further said: “We also gave the green light to develop set an economic plan for the emirate to create new sectors in a way that guarantees its superiority, global competitiveness and investment attractiveness… We asked the six Commissioner Generals overseeing the strategic growth pillars to hand over a 100-day plan within two weeks”.

“We have also approved the setting up of the Dubai Media Council, which will house the Dubai Media Office, media and production cities, studios, radio networks, television and newspapers as well as the creation of the TV and film production committee. Ahmad Bin Mohammad Bin Rashid will be its chairman . Our media competitiveness is crucial in the coming period” Dubai Ruler revealed.

Dubai Council was announced by sheikh Mohammed on January 4,

The Chairman of the Dubai Executive Council will be appointed by the secretary general of the Majlis.

The post Mohammed Bin Rashid: A plan of 50 goals for Dubai over the next five years appeared first on The Wealth Land.